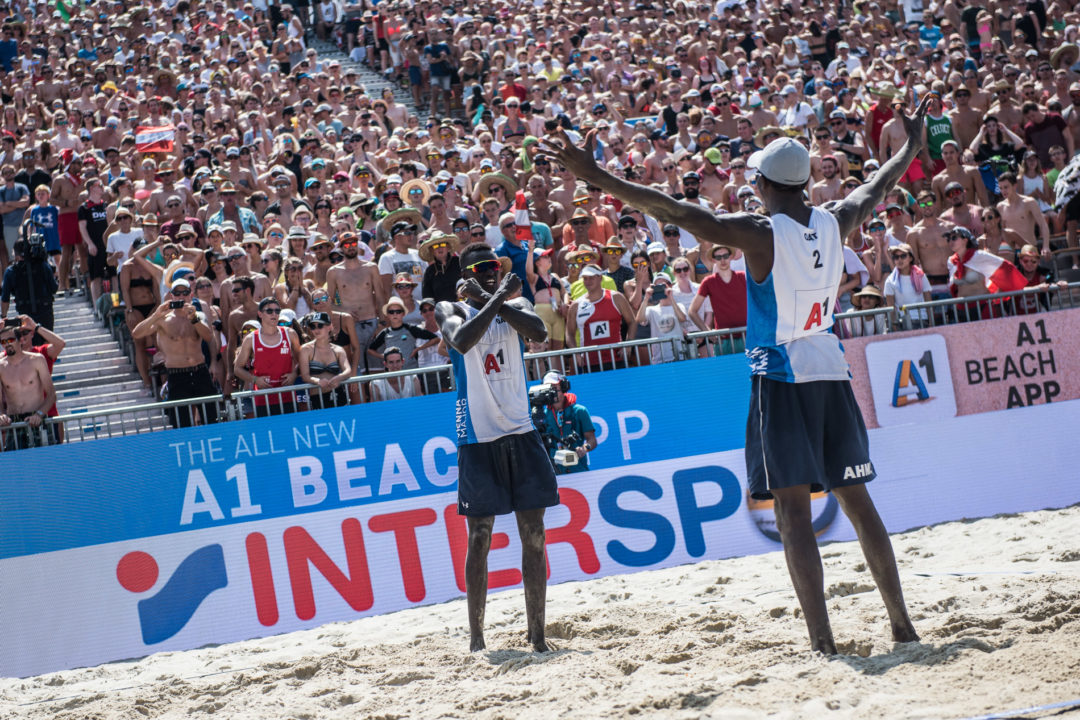 The men's semifinals are set for the Vienna Beach Major with No. 3 Anders Mol/Christian Sorum of Norway and No. 5 Dutch pair Alexander Brouwer/Robert Meeuwsen leading the field. No. 14 Grzegorz Fijalek/Michal Bryl (Poland) and No. 24 Cherif Younousse/Ahmed Tijan (Qatar) round out the group.  Current Photo via FIVB

No. 14 Grzegorz Fijalek/Michal Bryl (Poland) and No. 24 Cherif Younousse/Ahmed Tijan (Qatar) round out the group.

Cherif/Tijan began the tournament in the qualifiers and have won six straight matches en route to the semifinals, two in the qualifying rounds, two in pool play and two in knockout rounds. The

Mol/Sorum and Brouwer/Meeuwsen each won their respective pool titles as well, going 2-0 in Pool C and Pool E.

Fijalek/Bryl went 1-1 in Pool C, but did not play Mol/Sorum due to the modified pool play format. The pair lost its first match of the tournament, but has won four in a row since, playing through both elimination rounds and the quarterfinals.

The two lower seeds will face off in Fijalek/Bryl vs. Tijan/Cherif in the first semifinal match, followed by Sorum/Mol vs. Brouwer/Meeuwsen.

Mol/Sorum are aiming for their third title and second Major win in the last three weeks, following the gold in Gstaad on July 15 and the CEV European Championship on July 22. The pair also reached the podium at the Itapema Four Star on May 2 as the runnerup.

Fijalek/Bryl have already secured their top FIVB finish of the year, ahead of fifth-place efforts at the Doha, Xiamen and Warsaw Four Star events.

Cherif/Tijan are looking for their second podium finish of the year, following a bronze medal at the Doha Four Star on March 10.

Four of the eight Round of 16 matches went to tiebreak, including those featuring Mol/Sorum and Brouwer/Meeuwsen. The Norwegians topped Brazilians Ricardo/Guto Carvalhaes (16-21, 21-19, 15-5), while the Dutch rallied past top seeded Americans Phil Dalhausser/Nick Lucena (26-28, 24-22, 15-10).

Also winning in three sets were Americans Taylor Crabb/Jake Gibb and Brazilians Evandro Goncalves Oliveira/Vitor Felipe. Crabb/Gibb advanced to the quarterfinals with an 11-21, 21-19, 15-11 win over Russia’s Konstantin Semenov/Ilya Leshukov, while Evandro/Vitor Felipe held on for the win against Latvia’s Martins Plavins/Edgars Tocs.

In the quarterfinals, Brouwer/Meeuwsen played their second tiebreak match of the day, with a 17-21, 21-16, 15-13 victory over Evandro/Vitor Felipe.

The rest of the matches were decided in straight sets. Fijalek/Bryl ousted Pedro Solberg/Bruno Schmidt, while Tijan/Cherif knocked out Crabb/Gibb and Mol/Sorum took out the final Austrian team in the field, No. 8 seed Clemens Doppler/Alexander Horst.