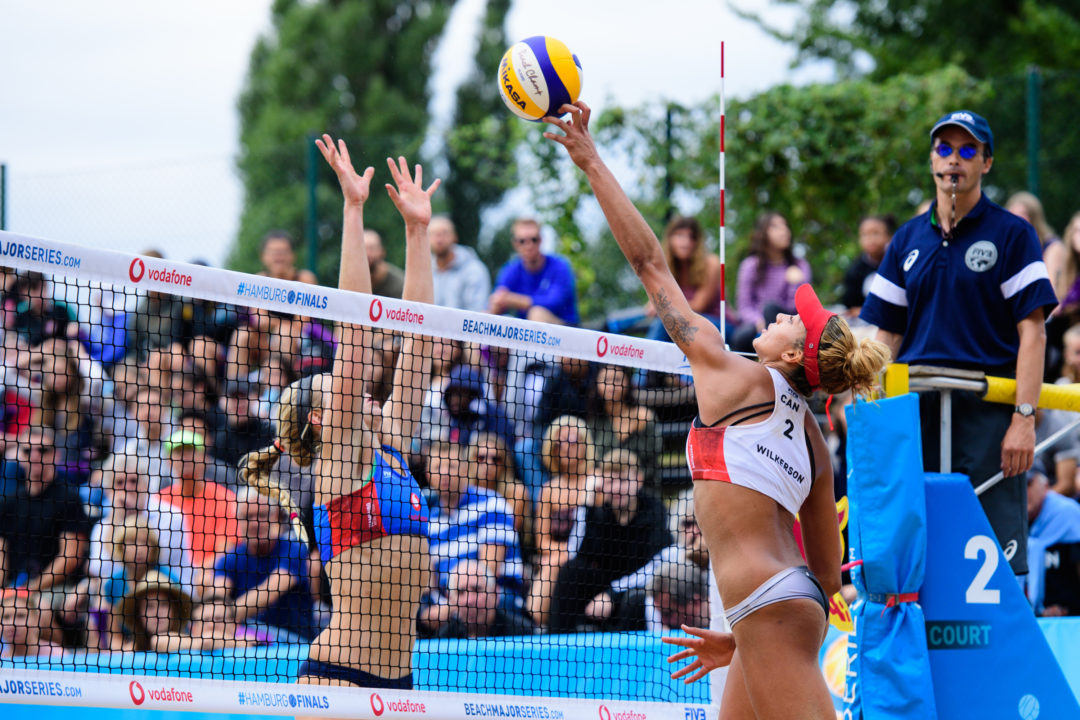 "It seems this season things are clicking, I’d say the added experience of having a year under our belt and having more support from our integrated support team and a new coach have definitely all contributed." - Canadian Brandie Wilkerson said. Current Photo via FIVB

Canadians Heather Bansley and Brandie Wilkerson had a break out season on the FIVB Beach World Tour.

The pair played their first FIVB tournament together at the Sept. 2016 World Tour Finals in Toronto, finishing ninth. Since then, the duo has posted 17 Top 10 finishes, missing just twice. In 2018, their success has included four medals – gold at the Warsaw Four Star (July 1), silver at the Ostrava Four Star (June 24) and bronze at the Itapema Four Star (May 20) and Gstaad Major (July 15). The pair wrapped up their season with a fifth-place effort at the FIVB World Tour Finals.

VolleyMob caught up with the pair to talk about their standout year, the strength of Canadian beach volleyball and their new sponsorship deal with Kerri Walsh Jennings’ P1440.

1. What drew you to Kerri Walsh Jennings, p1440 and the sponsorship? What difference do you think that will make for you on the FIVB Tour and beyond?

Over the season I was able to grow closer to Kerri Walsh Jennings and really get the chance to understand her vision for a multi-platform event. It’s exciting to feel the efforts looking to progress the culture surrounding beach volleyball, something that has never been done on such a big scale. Playing on the p1440 tour will help our team because it adds to the number of high level tournaments we can add to our competition calendar.

2. Since May, you managed seven Top 5 finishes in eight tournaments, including the gold at the Warsaw Four Star, bronze at the Gstaad Major and fifth place at the World Tour Finals last week. Did you change something in your training, is it luck of the draw or are things just clicking for you lately?

It seems this season things are clicking, I’d say the added experience of having a year under our belt and having more support from our integrated support team and a new coach have definitely all contributed.

3. Since teaming up, you have racked up 19 Top 10 finishes, including four podium finishes. What has been the key to your quick and yet sustained success?

Heather’s experience in the backcourt allows me to shine and make decisions on my own. Playing with an accomplished, veteran partner has taught me a lot about the game. Not only that, but we are growing with our connection and how we hold each other to a high standard both on and off the court.

4.You have played several of your Canadian cohorts on the FIVB Tour, including your former partners. Is there a different mindset when you are playing a team and/or player you are more familiar with?

Playing any Canadian team is similar to competing against teams you crossover with multiple times. In fact, the team we saw most this year was (Czech pair) (Barbora) Hermannova/(Marketa) Slukova—playing them six times this season. All the teams on tour are advanced enough to make adjustments so no two games are ever the same, that’s one of my favorite things about World Tour.

5. What does your success and that of your fellow Canadians on the FIVB Tour and also the success the McNamara twins have found collegiately and abroad mean for the future of Canadian volleyball?

The success of Canadian teams abroad as well as collegiately really shows the hard work and dedication that Canadian athletes have been putting in for years. It’s exciting to show the world as well as the developing Canadian athletes that Canada is one of the best beach volleyball nations and can be a leader in world class performance. To be able to set that standard by example will ideally leave a lasting impression for generations to come.

Our partnership has changed in that it has grown and matured so that we better complement each other’s style of play. We’ve surrounded ourselves with an awesome team in Canada, most importantly our new head coach. Together our goal is that we will continue to perform at a consistent high level throughout the season. All this in efforts to work alongside every World Tour athlete that inspires to win gold at the Olympics, so we will continue to strive for it.

7. Talk about your partner and what she brings to the table. What do you value in your partner? How do you get each other through the ups and downs a tournament and season can bring?

My partner Heather is a world class defender that brings athleticism, grit, passion, and technical skill to the table. She is a leader by example, not only to me but worldwide, as seen through her work ethic and commitment to what it takes to be an Olympian. On and off the court I value her support, honesty, and her sense of humor.

Something not a lot of people know about me is that I am a vegetarian. Something people may not know about Heather is her obsession with Pitbull puppies.

9.  You have traveled the globe for volleyball. What is your favorite place to play?

While there are many places I’ve played and loved for different reasons, the best has to be Switzerland. I was born there and the majority of my family is still living there, so having the opportunity to see them and cheer me on as I compete is extremely meaningful.

One of my favorite volleyball moments was shared with Heather as we won our first gold together, on Canada Day which was also my birthday.