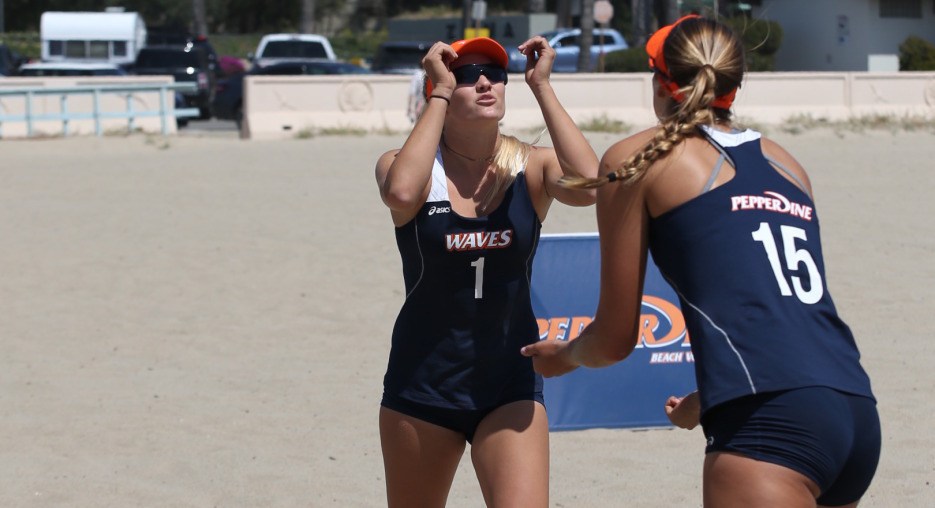 Pepperdine's No. 2 pairing is atop the group after defeating teams from South Carolina and Georgia State. Current Photo via Pepperdine Athletics

The USA Volleyball Collegiate Beach Championships are underway. The 24 women’s teams have been divided into six pools, A through F. The top two teams in each pool advance as well as the highest four of the third-place pool finishers, based on their point ratios. Only American citizens were eligible to play in the tournament resulting in mixed pairs from several schools.

Pepperdine’s No. 2 pair Corinne Quiggle and Brittany Howard (28-3) went 2-0 on the day in Pool E, edging the competition in a pair of three-set affairs, after dropping the first set of each contest. The duo started the day with a 15-21, 25-15, 15-10 win over South Carolina’s Adrianna Culbert and Katie Smith, and followed with an 18-21, 21-16, 21-19 nail-biter against Georgia State’s Chelsea Ross and Delaney Rohan.

Ross and Rohan went 1-1 on the day, topping USC’s Jenna Belton and Jo Kremer in the pool’s opening match. Culbert and Smith also topped Belton and Kremer in straight sets.