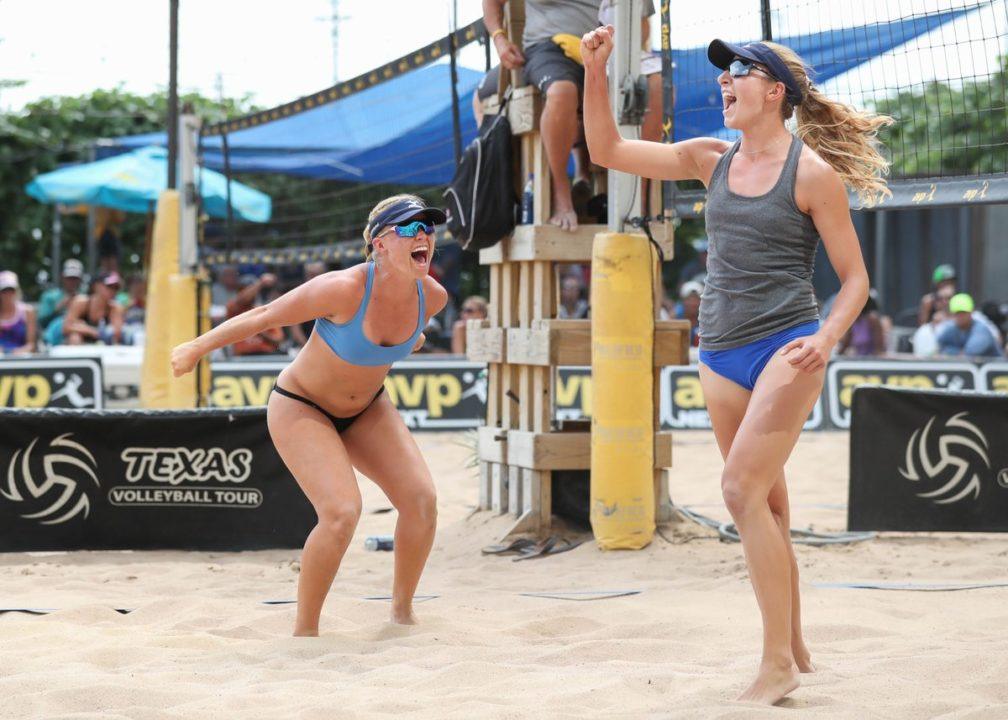 Top qualifier Ed Ratledge and Eric Zaun made it through, while No. 2 seed Aurora Davis and Bree Scarbrough led the way through the women's qualification rounds. Current Photo via AVP

The qualification matches for the Austin Open were played on Thursday with four teams advancing to the main draw on the men’s and women’s side.

On the women’s side, No. 2 seed Aurora Davis and Bree Scarbrough, No. 6 seed Kimberly Smith and Xi Zhang, No. 9 seed Nicolette Martin and Allie Wheeler and No. 13 Karissa Cook and Lara Dykstra advanced.

Cook/Dystra enter the main draw as the No. 16 seed and will face No. 1 Betsi Flint and Kelley Larsen. Davis as Scarbrough become the No. 13 seed and will take on No. 4 Angela Bensend and Geena Urango. No. 14 Smith/Zhang will battle No. 3 Kim DiCello and Emily Stockman, while Martin/Wheeler have the tall task as the No. 15 seed of taking on No. 2 Whitney Pavlik and April Ross.

Zhang played last week’s Huntington Beach Open alongside Nicole Branagh, acting at the No. 10 seed in the main draw. The duo lost their first round match to No. 7 Jen Forma and Kelly Reeves, but rebounded with a win over No. 15 seed Bre Moreland and Kerri Schuh in the loser’s bracket.

On the men’s side, top qualifier Ed Ratledge and Eric Zaun made it through, taking the No. 12 seed in the main draw. No. 7 Francisco Quesada-Paneque and Troy Schlicker, No. 11 seed Orlando Irizarry and Ian Satterfield, and 16th seed Piotr Marciniak and Raffe Paulis also advanced.

Marciniak/Paulis will face top seeded Phil Dalhausser and Nick Lucena in the main draw. Irizarry/Satterfield enter as the No. 15 seed and earned the right to face No. 2 Trevor Crabb and Sean Rosenthal. Quesada-Paneque/Schlicker are the No. 14 seed and will take on No. 3 Billy Allen and Stafford Slick. Ratledge/Zaun will face No. 5 Ty Loomis and Ty Tamblie.

Zaun/Ratledge made the main draw at last week’s Huntington Beach Open, qualifying as the No. 15 seed and facing Theo Brunner and Casey Patterson in the first round. The pair then won their first loser’s bracket match against Toppel and Weaver, but fell to Rosenthal and Crabb to end their tournament stay.