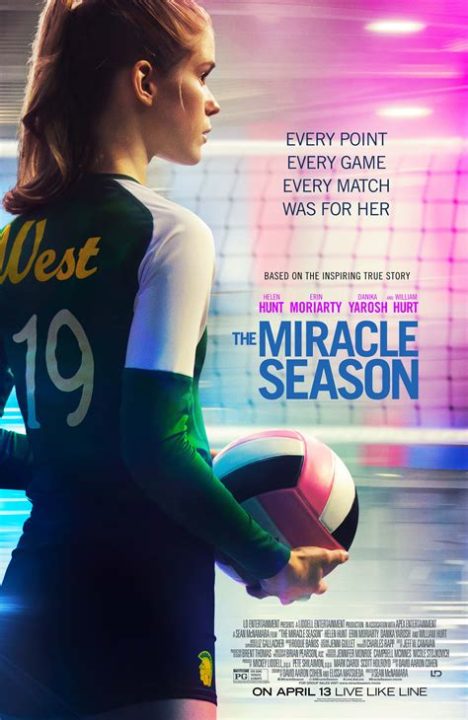 The director, screenwriters and actors in The Miracle Season did what they set out to do, which was share the inspirational story of Line and the West High School team. I could see this becoming the next Remember the Titans or We Are Marshall type bus trip movie that bonds teams together and fuels the fire to find success no matter the adversity.  Current Photo via LD Entertainment

Ahead of the film’s opening, I spoke with Kathy Bresnahan, the real life coach from the movie The Miracle Season, which was based on her book of the same name and told the tale of the 2011 Iowa City West High School girls volleyball team.

In the conversation, Bresnahan, or Coach Brez as she is known to friends and players, discussed the life of Caroline “Line” Found, her memories of that roller coaster season and the path to the story making the big screen. Brez also dispelled some liberties taken in the movie.

On Monday, after seeing many positive social media posts and checking out many previews and reviews over the weekend, I was finally able to make my way to theatre to take in Line’s story.

While I don’t profess to be a renowned movie critic, I do take in more than my fair share of flicks at the local cinema and have spent a lot of time around the game of volleyball the last 16 years.

For my first watch of The Miracle Season, I took along my parents (ages 67 and 68). It is safe to say that all three of us had many teary moments during the hour and 39 minute drama, despite knowing the entire story line going in.

This movie hits each human emotion from the laughter and brevity that Line brought to life and the team to tears and heartache as tragedy ensues.

Helen Hunt embodied the hard-shell nature the producers imbued Bresnahan with, though the coach told me that she was not “three times worse than Bobby Knight” as portrayed. In between staunch coaching performances, viewers are able to see cracks of humanity in the coach, which develop as the movie goes on.

William Hurt as Ernie Found, although his story also was tweaked for the movie, was the representation of the dad everyone hopes for, one that loved his wife to the Nth degree and cherished his daughter no matter what and treated her teammates and friends as his own children. There was never a question of his emotions and the story of his journey is nearly as important as those of the players. Hurt made you want to give him a hug throughout and call your father afterward and tell him how much you loved him. He could not have been more real.

Much of the movie is told through the eyes and voice of Kelley Fliehler, Line’s best friend. You see her love and admiration for her best friend, you watch her deal with unspeakable grief and guilt, and you watch her thrust into a role on the team for which she was unprepared. Erin Moriarty, who seems like the girl next door that you have known your whole life, is totally believable in each role.

While The Miracle Season is a feel good movie of a team coming together and working toward a common goal in the face of adversity, it is not all sunshine and roses. The movie speaks to internal rumblings that can exist in the midst of trouble, the feeling of unworthiness in failure, doubt and much more.

The on-court action is often shown in choppy sequence, flashing from a serve to a dig to a slow-motion swing, but there isn’t a lot of full play by play serve to point type footage. If that is what you are looking for, this may not be your movie. The characters and their journey are front and center with the volleyball acting as a backdrop.

With that said, volleyball fans will appreciate moments of playing against “the twin towers,” the pain of a missed serve or the frustration of being on the receiving end of a stuff block. According to several media reports, many of the Moriarty’s co-stars were selected because of their volleyball skills, but the star had to attend intense training to make her skills palatable. While I didn’t find it too distracting as the focus is on the story and the individuals, volleyball purists may struggle with Moriarty’s setting skills, but, in a way, that is all part of the story.

All told, director Sean McNamara and screenwriters David Aaron Cohen and Elissa Matsueda did what they set out to do, which was share the inspirational story of Line and the West High School team. I could see this becoming the next Remember the Titans or We Are Marshall type bus trip movie that bonds teams together and fuels the fire to find success no matter the adversity.

It is a family friendly movie in terms of language and adult situations, which is part of the reason faith groups have embraced it to date. Grief and loss are a part of the story, so parents will need to gauge if their children are prepared for those life lessons.

That’s my quick take. Go see it and judge for yourself, but if you are ready for an emotional, yet uplifting few hours, it gets my vote. I could see many youth, club, high school and college teams of all sports going as a group and sharing in the themes.

Here’s a look at a few other takes from social media.

Today’s the day the world gets to love Caroline Found as much as I do. #MiracleSeason is out today and of all the emotions I have surrounding it- I couldn’t be happier knowing that Caroline will continue to inspire people ❤️ #LiveLikeLine

What a weird feeling it is to have a tragedy you lived through made into a movie.. but so wonderful to know that Line’s story is reaching so many #LiveLikeLine https://t.co/FCK7ejn53K

Got a sneak peek at new movie #MiracleSeason & encourage everyone to check out this incredible story of how a group of young women & a community came together in midst of a horrible tradegy… how that event was used to truly impact the lives of many! #LiveLikeLine pic.twitter.com/YAKFklbtwp

This one means a lot and has been a labor of love for 5 years. Grateful for the lifelong friendships that have been made with the Found family, @brez6258 & the West High VB team. Grab a friend or teammate and go see @miracleseason – opens everywhere TODAY! #livelikeline pic.twitter.com/a9c87EkBTS

Amazing experience getting to see The Miracle Season! Can’t believe it’s been 7 years, but now everyone will know what it means to #LiveLikeLine

We loved The Miracle Season! Learn more about it on our web site, and then go see it with your team! It's based on a true story! #LiveLikeLine https://t.co/OIbqtd5sJG pic.twitter.com/RBF4vW8wyy

Just finished watching an advanced release of The Miracle Season. Wow. Once you finally dry your eyes you’re in for a powerful story (and then you’ll prob cry again) Captures everything that I love about sports. So well done ?????? Go check it out April 6th!! #LiveLikeLine https://t.co/ptYWjbJoli

Academy award winner @HelenHunt + an inspirational story + our great sport = AWESOMENESS ? I can’t wait to watch #TheMiracleSeason It promises to touch the heart & highlight the beauty of sport. https://t.co/irVVzYuOZP

Nothing like crying our eyes out watching The Miracle Season (volleyball movie) for team bonding! This is such an amazing movie, I encourage every athlete to watch it. Great story line. There was not one dry eye! Makes even more excited for season time ???? #livelikeline pic.twitter.com/jTZ2Dy6LrB

Definitely wrote this one from the ❤️. Here is my review for @MiracleSeason and the emotion you can help but feel like you’re part of the team. There is also a volleyball analysis of the real volleyball season of West High of 2011. Thank you @brez6258 https://t.co/7vOJmLusiV

Such an amazing experience tonight coming together with 175 #PremierFamily members to see this moving story. What an absolutely powerful and inspirational movie! @MiracleSeason is a must see with your team, club and family. #LiveLikeLine ???

Hi e-friends. Want to watch the most epic and inspirational true story? Go check out @MiracleSeason ASAP. You’ll cry and laugh and probably feel like you can run through a brick wall after.

Pro tip: Don’t leave until the credits are over. pic.twitter.com/67iwsKSrTr

Doing my part and seeing this movie. I highly recommend anyone involved with sports seeing this film. You will always have adversity in a season or in life, big or small. But the question is, how do you respond? Great movie with a great message. #TheMiracleSeason pic.twitter.com/nuVoyt5Jkp