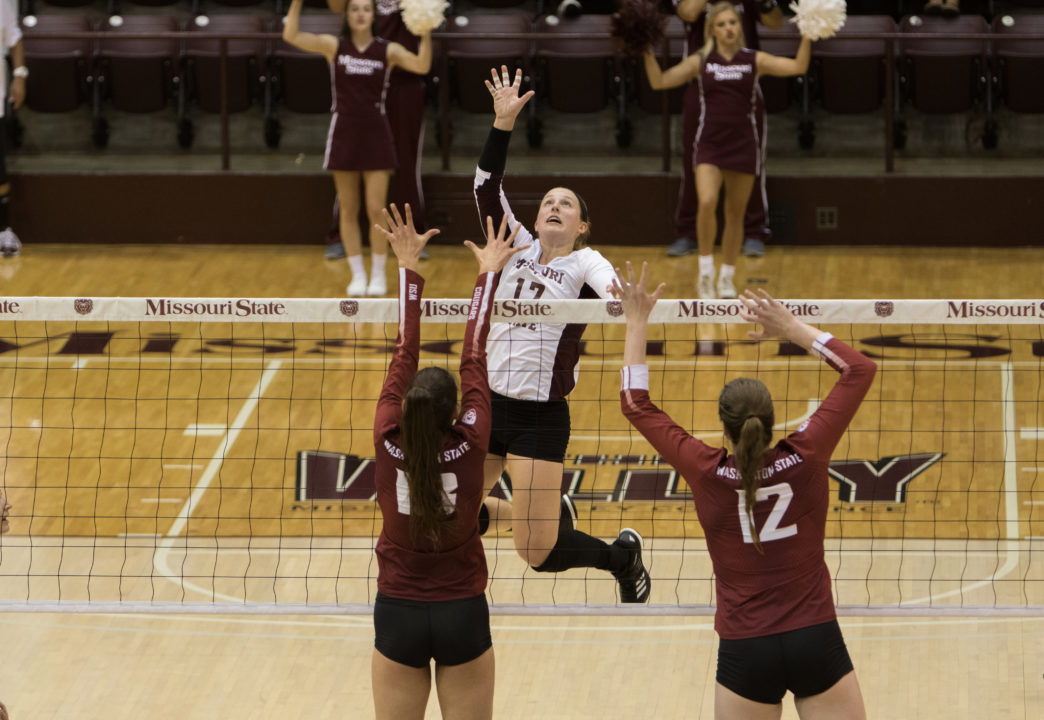 Missouri State was led by reigning Missouri Valley Conference Player of the Week and senior outside hitter Lily Johnson with a match-high 20 kills, 9 of which were in the first set alone. Johnson hit .360 on the match and added 9 digs and 2 aces for the match. Libero Emily Butters led all defenders with 21 digs. The Bears, in their 6-2 offense had Daniele Messa and Emelie Orlando distribute 30 and 14 assists, respectively, to the .289 offense. Messa also contributed the Bears’ lone double-double by adding 10 digs to the defense. Senior Brianne Dixon added 11 digs in her final match at home.

Drake, in their best season in recent memory, were led offensively by Cathryn Cheek with 14 kills and added 9 digs, 4 blocks and an ace to fill the Bulldog stat sheet. Kyla Inderski had Drake’s only double-double with 10 kills and digging a match-high 21 digs. Libero Kylee Macke added 15 digs and 5 assists. Paige Aspinwall and Sara Jensen run a 6-2 offense as well, dishing out 22 and 14 assists, respectively. Gillian Gergen blocked a match-high 5 balls to go along with her 5 kills.

Drake’s 10-7 lead was the largest for either team in the early-going of the second period, and the Bears battled back to take the upper hand at 16-15 on an Aubrey Cheffey kill. The score was tied four more times until Johnson hit kills on either side of a MacKenzie Irwin block to make it 23-20. The Bulldogs twice served for the tie, but Johnson and Cheffey met each with a kill for the two-point win.

The Bears piled up 10 quick kills for a 10-5 advantage in the third, and led by multiple points until Drake closed to 17-16. A pair of DU errors made it 19-16, and the teams sided out to 24-21 when Cambree Villarreal‘s stuff block secured the championship for the Bears.

SPRINGFIELD, Mo. – The Drake University volleyball team put up a strong fight but could not slow down Missouri State in a 3-0 loss Sunday afternoon. With the win, the MSU clinched the Missouri Valley Conference regular season title and currently owns a 16-0 league record.

Missouri State was led by 20 kills from All-American Lily Johnson as the Bears hit .289 in the win.

After a close first set in which MSU never trailed but never led by more than six points, the Bulldogs put a charge into the Bears with a second set that featured five lead changes and 11 ties. However, Drake never led by more than two points before MSU pulled away for the 25-23 win. MSU maintained a lead for nearly all of the third set to hold off the Bulldogs for a 25-21 to remain undefeated in the MVC and win its 32nd straight MVC match dating back to last season.