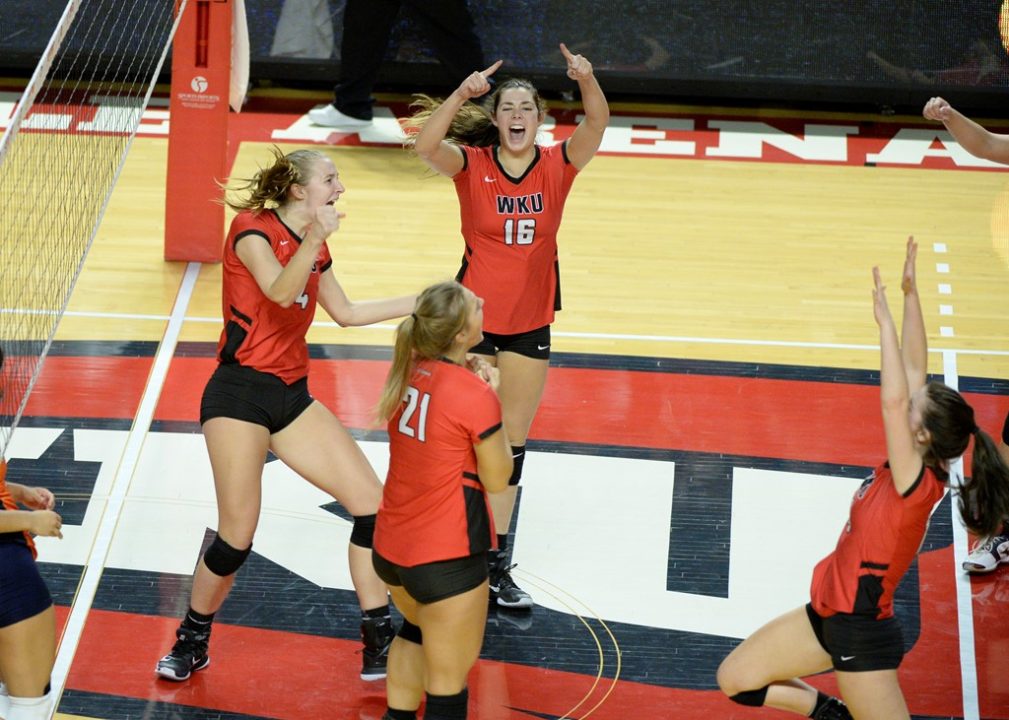 The visiting Western Kentucky Lady Toppers (RV) defeated the Rice Owls in consecutive sets on Friday night to record their 22nd straight victory and remain undefeated in Conference USA play. The Toppers’ last loss was on September 2nd to Illinois.

“This was a great win for our team on the road tonight,” head coach Travis Hudson shared. “We came out hot offensively but Rice was able to make some nice adjustments as we went along. That forced us to have to raise our level of defense down the stretch to secure this win. I’m really proud of our kids tonight.”

For the Owls, freshman opposite Kassidy Muse had a team-high seven kills, sophomore middle Grace Morgan recorded five blocks and sophomore libero Lee Ann Cunningham tallied a 17 digs, including the 1,000th of her career.

Western Kentucky dominated the first frame offensively, notching 20 kills on .581 hitting to win by a comfortable 25-17 margin. In set two, the Lady Toppers jumped to an early 5-0 lead and never looked back, winning the frame 25-16. The third set was knotted at 22 before the visitors scored three straight points to seal the victory 25-22.

Next up, Western Kentucky heads to Middle Tennessee for a Sunday match, while Rice hosts Southern Mississippi, also on Sunday.

23-22 after ANOTHER Anderson kill! pic.twitter.com/yDkPQfwfll

“This was a great win for our team on the road tonight,” head coach Travis Hudson shared. “We came out hot offensively but Rice was able to make some nice adjustments as we went along. That forced us to have to raise our level of defense down the stretch to secure this win. I’m really proud of our kids tonight.”

The victory improved WKU’s record to 26-2 on the season and 12-0 in Conference USA action. With the sweep, the Lady Toppers have now swept 20 matches, the most in the NCAA. WKU has claimed its last 37 outings over C-USA foes as well. The streak of 22-straight wins now stands alone as WKU Volleyball’s second-longest streak in program history as Rice drops to 19-7 overall and 9-3 in league play.

Friday night action opened from Houston with a Dellinger kill before Rice tallied the match’s next two points. The Lady Toppers ran off the following five points to secure a lead they would not relinquish for the remainder of the set. Rice pulled within four at 17-13 but WKU claimed eight of the final 12 points in the frame to win the opening set 25-17. The Red and White worked at a blistering .581 offensive clip in the frame with 20 kills on 31 swings. Anderson and Cavanaugh each registered six kills in the set while Lucas recorded 15 assists.

Set two saw the Lady Toppers open up a 5-0 lead to force another early Rice timeout. Out of the break, the Owls got on the board but WKU responded with three more points, including a pair of aces by Lucas to open up an 8-1 advantage. Rice inched closer in the middle of the frame, pulling within five at 14-9 but WKU pieced together another run to push its lead to 19-10. Anderson capped the second set with her eighth kill of the match for the 25-16 victory. Cavanaugh led the way with five kills in the frame while Sydney Engle and Dellinger each chipped in four. WKU finished with three aces and 23 digs in the set, with Kowalkowski accounting for five digs.

WKU jumped out to an early 5-1 lead again in set three but Rice battled back, scoring 10 of the next 13 points to take an 11-8 advantage. From there, the sides worked to 10 ties down the stretch of the third set. While the Lady Toppers held a slim 19-18 lead late, Rice strung together three-straight points to take a 21-19 lead deep in the set. At that point, Anderson found a groove and fired off three-straight kills for the visitors to give WKU the 22-21 lead. After a Rice timeout, the Owls evened things up before Anderson struck again to give the Red and White a lead for good. A Rice attack error brought the frame to match point before Engle found the floor with a kill to close the book on the 25-22 set three victory. Anderson finished with six kills in the frame while Engle and Dellinger each added three. Music tallied 10 of the Lady Toppers’ 29 third-set digs while Lucas added seven.

Lucas registered her seventh double-double performance of the season in the match. The senior tallied 39 assists and 13 digs for her fourth double-double in a sweep this year. Contributing plenty of other ways as well, Lucas finished with five kills, posting three block assists and notching a pair of service aces.

Engle subtly reached triple double territory from the Tudor Fieldhouse. She finished with nine assists, eight kills and seven digs in the match to fill the statsheet.

Leading the offense was Anderson with 14 kills on the night, working at a .440 clip. The junior also added four digs, two block assists and an ace. Anderson now sits in 10th on WKU’s career block assists list with 236 in her time on The Hill.

Rice (19-7, 9-3) lost at home for the first time since their 3-1 loss to California on Sept. 8, the Owls second home match of the season. Meanwhile, the Lady Toppers (26-2, 12-0) added to the nation’s second-longest win streak with their 22nd straight victory and 37th consecutive C-USA victory, which dates back to 2015.

Rice was outhit for the match .286 to .187 despite collecting 10.0 team blocks. Freshman Kassidy Muse led the Owls with seven kills (.312) while sophomore libero Lee Ann Cunningham surpassed 1,000 career digs with a match-high 17 digs.

“WKU played a great match and set the tone early,” Rice head coach Genny Volpe said. “They were in control from the beginning of the first set. The velocity of some of their attacks took some of our players off guard. You can scout them on video and prepare for them, but I think it took our team just a little too long to get adjusted to them. Unfortunately, for us they just flat outplayed us. We started to make some strong adjustments after the break and had some opportunities but just didn’t take advantage.”

The Owls will play one last regular season home match on Sunday when they host Southern Miss at 1 p.m. from Tudor Fieldhouse. Prior to the match, the Owls will honor seniors Julianna Dole, Madison McDaniel, Stephanie Mendivil and Portia Okafor.