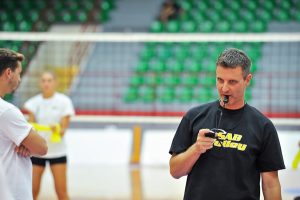 SAB Volley Legnano has terminated their contract with head coach Andrea Pistola after the unsatisfactory performance from his team this season. Current Photo via Loris Marini/legavolleyfemminile.it

SAB Volley Legnano has terminated their contract with head coach Andrea Pistola after the unsatisfactory performance from his team this season. On the year, Legnano has accumulated a 4-9 record and sit in 10th place in the league at the midway point of the season. This leaves them out of contention for the playoffs should they not improve in the second half of their season.

Pistola has held the head coaching position for Legnano for the past two seasons. This is the first season for Legnano in the Serie A1 as they finished their 2016-17 season in the semifinals of the Serie A2 after losing to Pesaro.

While the team searches for a new head coach, assistant coach Mauro Tettamanti has been selected to lead the team. Without a head coach, SAB Volley Legnano management has full access to tap into the transfer market and make needed changes to the program.

Earlier this season, two big names left the program – Annie Drews and Sonja Newcombe. Newcombe found her new club in Brazil with Minas Tenis Clube while Drews has signed a provisional contract with Pomi Casalmaggiore who is also in the Serie A1 Italian League.

Coaches being fired in the Italian Serie A1 Women’s League has not been uncommon this season as Pomi Casalmaggiore’s short-term head coach Marcello Abbondaza was fired after just six months and a terrible start to the season. Lardini Filottrano has also terminated their former head coach Alessandro Beltrami following a less-than-ideal start to the season. Finally, just the other day Firenze fired Marco Bracci via a mutual agreement.