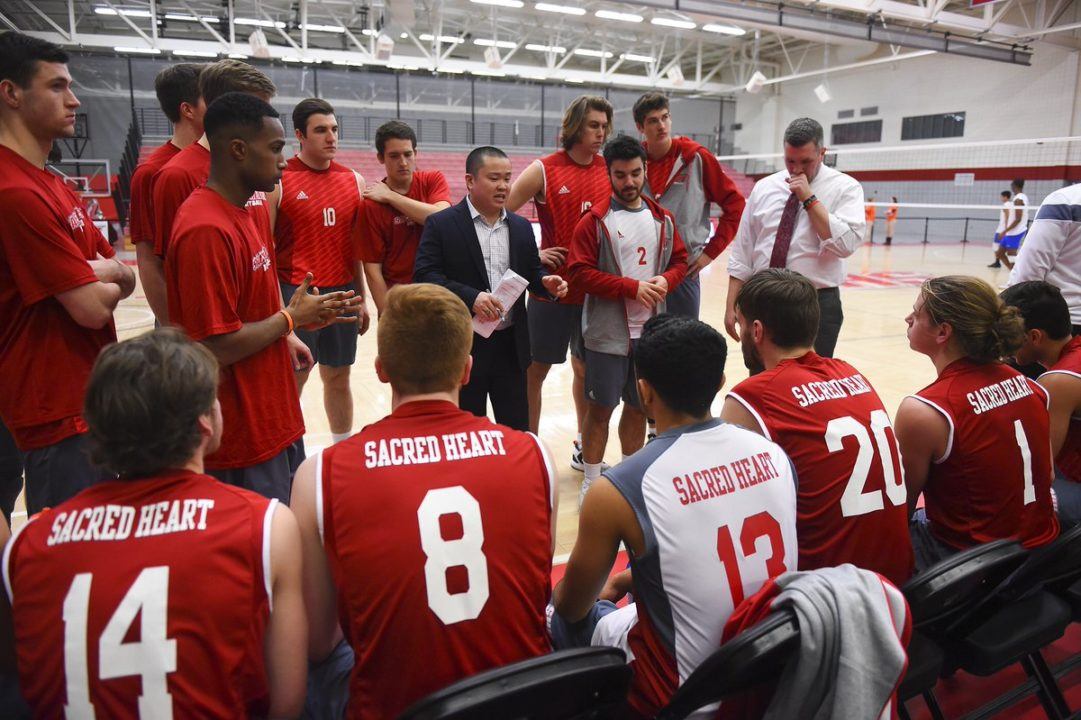 Sacred Heart improved its position to nab the final spot in the EIVA Tournament with a 3-1 win over NJIT on Friday night. The Pioneers won all major statistical categories in the match en route to the 25-20, 25-11, 13-25, 25-17 win.

Sacred Heart now sits at 7-6 in EIVA play, ahead of NJIT, George Mason and Harvard, which are all 6-7 with one match remaining. SHU faces Princeton (12-12, 8-5 EIVA) Saturday night, while NJIT and Harvard will play one another and George Mason takes on No. 1 seed Penn State.

The Pioneers hit .400 or better in the three sets they won, managing a .293 effort for the night. SHU also posted 10 blocks and served up five aces, while allowing NJIT nine stuffs and four perfect serves. The Highlanders hit just .179 on the night.

Senior outside Jabarry Goodridge put down 17 kills and hit .343 for the Highlanders, but it was not enough. Goodridge also managed a team-best four digs. Redshirt junior opposite Raymond Kowalski added eight kills, while senior middle Luke Robbe put up a team-best five blocks.

Sacred Heart started the match with a pair of aces by setter Eduardo Zardo and continued on to a 10-3 lead. NJIT narrowed the gap to four as Kowalski turned in two kills. Back to back kills by Waumann boosted the lead back to seven at 17-10. Three more Waumann putaways put SHU on the hill at 24-17. The Highlanders staved off three set-point chances, before a service error the stanza.

A pair of blocks and two Waumann kills put Sacred Heart up 9-3 in Set 2. Three kills and an ace by DeLucie made it a 10-point game at 18-8. A service error slowed the Pioneers temporarily, but the Highlanders couldn’t stop a 7-2 set-ending run.

NJIT led Set 3 from start to finish. Kills by four different players, coupled with a pair of blocks, put the Highlanders up 16-8 at the midway point. Three kills, two blocks and an ace by Goodridge pushed the lead to 24-12. A service error ended the set.

After splitting the first 12 points of Set 4, Sacred Heart scored seven of the next nine to take a 13-8 lead. A 5-0 run, including two Bloomquist blocks made it 19-11. The Pioneers held the Highlanders at bay the rest of the way, ending the set with two Waumann kills and one by DeLucie.

The Sacred Heart men’s volleyball team kept their playoffs dreams alive, as they picked up a 3-1 win over the Highlanders of NJIT. SHU was led by Emerson Waumans who tallied an impressive 18 kills, of his 27 attempts, to finish the night with a .519 kill percentage. The Pioneers play their final game of the regular season tomorrow, as they take on the Princeton.

In addition to Waumas 18 kills, Christopher DeLucie followed with nine kills.  Setter Eduardo Zardo piled up a match-high 34 assists, including a match-best three service aces as the Pioneers held a slight edge over the Highlanders, 5-4. Libero Joshua Ayzenbuerg notched 11 digs while Michael Comens and Taylor Bloomquist led all players with five block assists. The Highlanders were led by senior outside hitter Jabarry Goodridge, who posted a team-best 17 kills.

In the first frame, the Pioneers raced out to a 10-3 advantage.  The Highlanders battled back, cutting the deficit to within four, 20-24, after a kill by Goodridge, but the Pioneers held on to a 25-20 win.

Sacred Heart got off to a quick start in the second frame, 8-3, and later extended its lead to 18-8.  The Pioneers never looked back, cruising to a 25-11 victory.

Both teams traded points early in the fourth frame and with the score tied at 6-6, the Pioneers went on a quick 5-1 run, taking an 11-7 lead, resulting in an NJIT timeout.  Sacred Heart scored five consecutive points, pushing its lead to 19-11 and went on to secure a 25-17 advantage to win the match, 3-1.