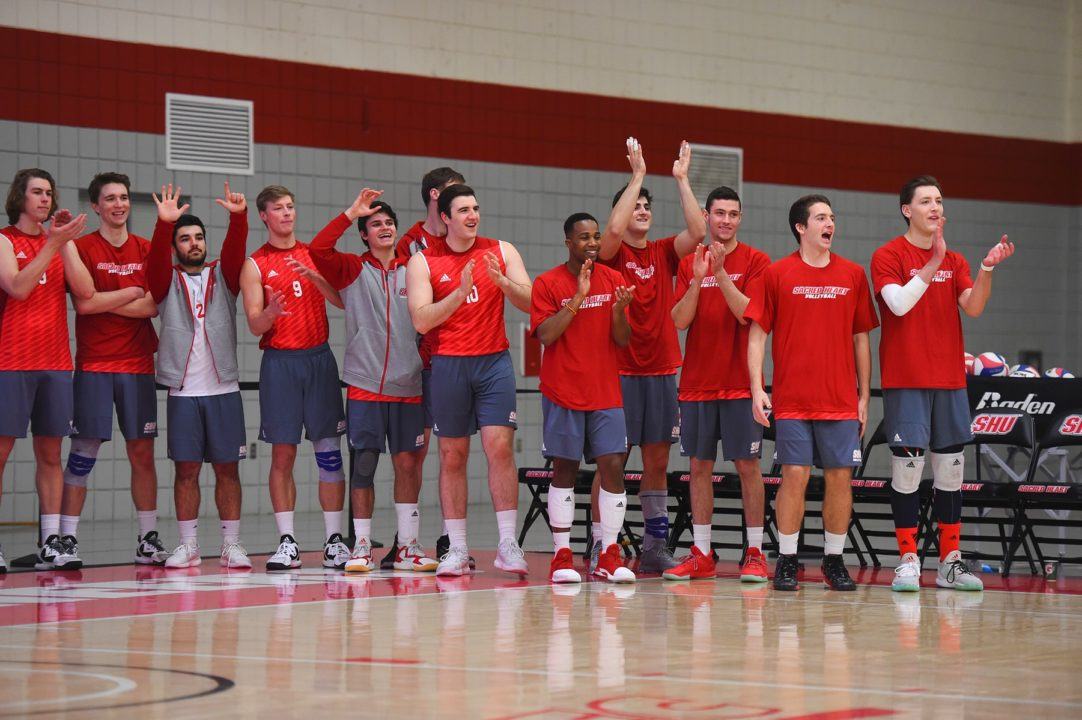 Sacred Heart ended a six-match losing streak in fine fashion, knocking off No. 12 Penn State via sweep Friday night. The Pioneers won the match 25-22, 25-19, 28-26 behind a strong hitting performance and stout blocking effort.

Penn State got 11 kills out of redshirt junior outside hitter Aiden Albrecht, who hit at a .474 clip. Senior outside Chris Nugent added eight kills and team-leading four digs and two blocks, but hit .000 for the night. Redshirt junior opposite Jalen Penrose chipped in five kills.

Sacred Heart built an early five point advantage at 12-7 in Set 1, thanks to four PSU miscues and two blocks. Back to back blocks pulled the Nittany Lions within three at 17-14. Down 22-17, Penn State mounted a comeback, rallying to within one at 22-21 with two Albrecht kills and a Calvin Mende ace. Sacred Heart scored three of the next four points to end it, capping the set with a triple block.

The teams split the first 10 points of Set 2. A pair of Wauman kills put SHU up 8-5. PSU narrowed the gap to one three times, last at 12-11. Back to back blocks by Dzema kicked off a 7-1 Pioneer run, which pushed the score at 19-12. The Nittany Lions would get no closer than four the rest of the way as DeLucie downed three more kills. SHU hit .433 in the stanza, while holding PSU to a .111 effort.

The Pioneers finished the upset with their best hitting performance yet, hitting at a .520 clip with just three team errors. Penn State jumped ahead 5-3 in Set 3, but the score was soon tied at 7-all. Trailing 9-8, Sacred Heart rallied to a 12-9 advantage with help from two PSU miscues. The Nittany Lions tied the score at 15 and 16, but a pair of DeLucie kills gave SHU a 19-16 lead. Sacred Heart went up 24-22, but a service error and a Penrose ace extended the match. Penn State answered two more Pioneer match point chances, before a kill by Taylor Bloomquist and a block by Bloomquist and Waumans wrapped up the sweep.

The Sacred Heart Men’s Volleyball team took on the #12 Penn State Nittany Lions at the Williams H. Pitt Center and went on to sweep them 3-0. Doug Dzema led the charge as he put up an incredible seven blocks. The Pioneers continue the push to the postseason, as they take on the Red Flash of Saint Francis U, tomorrow night at 7pm for senior night.

Aidan Albrecht led Penn State with 11 kills hitting .474 for the match, committing only two errors on 19 swings for the outside hitter from Old Bridge, N.J. Luke Braswell led Penn State in assist with 28 while Calvin Mende and Royce Clemens tied for a team-high three digs apiece. Matt Callaway led the Lions in blocks with three helping Penn State record four team blocks against the Pioneers.

The loss drops Penn State to 16-10 overall and 8-3 in EIVA conference play.

The Nittany Lions will be back in action tomorrow night as they take on the Crimson of Harvard in Cambridge, MA with a first serve slated for 7 p.m. ET.