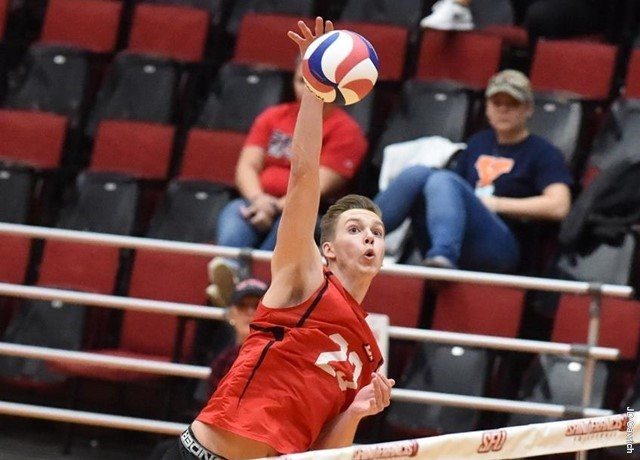 A .323 hitting effort and 14 blocks helped the Red Flash to a 3-1 win over Sacred Heart.  Archive Photo via Saint Francis Athletics

Redshirt freshman outside hitter Michael Fisher led the Red Flash with 14 kills, while hitting at a .440 clip and adding a team-leading seven digs. Redshirt junior outside Stephen Braswell chipped in 12 kills, while hitting .370. Senior opposite Jeff Hogan also reached double digits with 10 putaways to go with six digs and two blocks. Junior middle Keith Kegerreis put up a team-leading seven blocks and added five kills on a .500 hitting effort.

Saint Francis took Set 1 going away, thanks to … Two Hogan kills and a trio of blocks lifted the Red Flash to an 11-5 lead. A pair of Sacred Heart blocks cut the margin to four at 11-7, but that sparked a 6-0 SFU run, including kills from four different players. The Pioneers narrowed the gap from 10 to six three times, last at 21-15.Saint Francis scored four of the last five points to end the set, including a pair of Braswell kills.

Sacred Heart worked its way to a 16-9 lead in Set 2 and held on to the edge for a 25-21 win. After a tie at 7-all, three DeLucie kills, two by Waumans and two Bloomquist blocks helped the Pioneers to the 17-10 advantage. Down 23-17, Saint Francis scored four straight including two Braswell kills and an ace to narrow the gap to two at 23-21. A service error and a Waumans putaway evened the match at a set apiece.

The Red Flash took control of Set 3 early on, jumping ahead 4-0and continuing on to a 15-8 advantage. Three Kegerreis blocks and two kills apiece by Fisher and Braswell came in the first half of the stanza. A trio of SFU errors let Sacred Heart back within four at 17-13. Saint francis ended the set on an 8-3 run. Four different players tallied kills in the final rally.

The teams split the first 30 points of Set 4 before the Red Flash broke away. The Pioneers committed six errors down the final stretch, which helped Saint Francis to the win. Fisher also added a pair of kills as SFU took a 24-18 lead. Back to back kills by Comens staved off a pair of match-point chances, but a block by Braswell and Anthony Nicrota capped the win.

Saint Francis runs its win streak to seven matches and improves to 11-4 in conference play.

A pair of combination blocks and two kills from Hogan spearheaded a 7-3 lead for Saint Francis in the opening set. The Red Flash started to run away with the set after a block from Nicotra and Braswell to extend SFU’s lead to 11-6. Four straight SFU kills and a SHU attack error highlighted a 6-0 run to put the Flash ahead, 17-7. The Pioneers got within six, 18-12, after collecting four unanswered points. A Braswell kill put the first set to rest, 25-16.

Sacred Heart took a 4-2 lead in the second set after two service aces. Nicotra’s fifth total block of the match tied the set at 7-all. Sacred Heart scored six of the next seven points to take a 13-8 lead. The Pioneers stretched its advantage to 15-10 and forced Saint Francis to call a timeout. Sacred Heart continued to pressure but Saint Francis trimmed the lead to three, 23-20. Out of a SHU timeout, Ford’s service ace sustained SFU’s run to four, 23-21. An Emerson Waumans kill gave SHU the win, 25-21.

Kegerreis started off the third set with three straight blocks – two solo – to give Saint Francis a 4-0 lead. The Red Flash continued to spread the lead, 13-7, after a Braswell kill. Sacred Heart put together a 4-1 run to make the scored 16-12 in favor of the Flash. Saint Francis’ 13th block of the match put the Flash up 21-14. A Sacred Heart attack error ended the third set, 25-16.

Kegerreis was once again a force in the early going of the fourth set, giving the Flash a 4-1 advantage after a pair of kills. Tied at 5-5, both teams traded points until Sacred Heart took a two-point lead at 12-10. The Pioneers searched for separation but the Flash answered to knot the score at 13-13.  Two SHU attack errors gave SFU a two-point lead, 17-15, and forced Sacred Heart to burn a timeout. Saint Francis was able to hold the lead until the end, taking the final set 25-20.

Saint Francis takes on the winner of Thursday’s night match between Penn State and Princeton at 7 p.m. on Saturday night.

The Sacred Heart Men’s Volleyball team hit the road to compete in the 2017 EIVA tournament, taking on the Red Flash of Saint Francis U in the semi finals. The Pioneers would drop the match 3-1, to end their season in the EIVA semi-finals. Christoper DeLucie would lead the Pioneers in kills adding 10. The Red Flash will take on the winners of the Penn State vs. Princeton game tonight.

·         SHU bounced back picking up four straight points, thanks to Christopher DeLucie and a service ace.

·         The Pioneers bounced back in the second set, picking up the first two points, with the first coming from a Eduardo Zardo service ace

·         Each team exchanged points back and forth, as they score stood at 9-8, till Sacred Heart rattled off four straight points due to Red Flash errors

·         Saint Francis U made a late comeback bringing the match within three, but a SHU timeout would regroup the team, as the Pioneers would take set two, 25-21

·         The Pioneers backs were against the wall to start the fourth set in a must win scenario. SFU jumped to a 4-1 lead early, following a Emerson Waumans attack error

·         Each team continued to trade points, till SFU took a two point lead late following a Stephen Braswell kill to put the Pioneers down 18-16