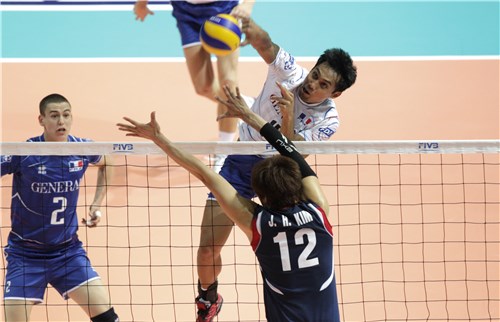 Samuel Tuia signed with the Berlin Recycling Volleys. The French outside hitter has played the last 4 seasons in Turkey. Archive Photo via FIVB

The Berlin Recycling Volleys have added a former member of the French National Team to their squad as they attempt to win their tenth German Bundesliga title. Samuel Tuia, outside hitter from Mata-Utu on the island of Uvea, has been announced as the latest addition to the flagship club of Germany’s capital.

It has been some time since Tuia has featured in the French National Team’s lineup. He has not been a part of any of their World League or Volleyball Nations League success. His last appearance for France in an FIVB tournament was the 2014 World Championships. His only medal with France came when he helped them win the silver medal at the 2009 European Championship.

While he has not been incredibly active with the national team, Tuia has been maintaining his club career throughout Europe. He started his professional career in France and won a silver medal in the French Ligue A with AS Cannes in 2010. He played the next season in Poland with Indykpol AZS Olsztyn and played for Kuzbass Kemerovo in Russia for two seasons until 2013.

Berlin Recycling Volleys celebrated another German Bundesliga title at the end of the 2018 season. This was their third title in a row and ninth in club history. They also reached the Playoffs 6 of the CEV Champions League, losing to VfB Friedrichshafen. He will be joining American libero, Dustin Watten.