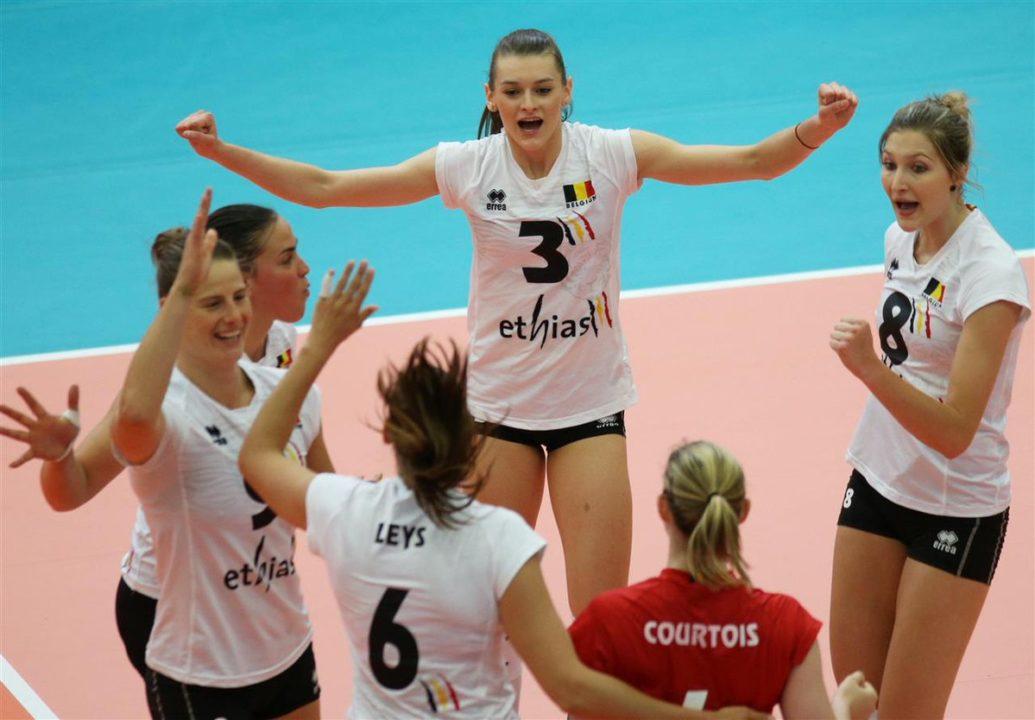 Italy, Belgium and Belarus cruised to sweeps of their respective foes to kick off Pool D play in Kortrijk, Belgium. Current Photo via CEV Volleyball

Italy, Belgium and Belarus cruised to sweeps of their respective foes to kick off Pool D play in Kortrijk, Belgium.

Fourteen blocks and a 52 percent hitting efficiency lifted No. 13 Belarus to a sweep of No. 18 Spain to start Pool D play on Wednesday.

Belarus led Sets 1 and 3 nearly throughout, but had to overcome an early 8-7 lead by the Spaniards in Set 2. By the second timeout, Belarus had turned the deficit into a 16-13 advantage and went on to the 25-20 win.

Seven of the team’s 14 blocks came in the final stanza as Spain managed just a 26 percent hitting effort.

“The way we won this match makes me happy and hopeful ahead of the next games,” Belarus coach Aliaksandr Klimovich said. “Our tactical plan was good, we could read their game from the first minute, we remained concentrated until the end, our block was outstanding and our counterattacks worked well too. Of course, we have some experienced players on our team, but our setter remained calm all the time, and she listened to her coach. Let’s enjoy the victory today, and after that we will be taking it one match at a time and see how far this is going to take us.”

Belarus only gave away nine points in the match on miscues.

Jessica Rivero led all scorers with 13 points for Spain, all coming on kills.

“It was a good way to warm up for the remainder of the tournament,” Belgium coach Gert Vande Broek said.

“We could try some tactics and test some players; we had a good start to the tournament by playing this kind of match,” Italy coach Davide Mazzanti said.

The Italians built leads of 8-4, 8-3 and 8-4 in the three sets and cruised on to leads of seven, eight and nine by the midway point, never looking back.

Italy posted 12 blocks, while allowing just five, and served up eight aces, while giving up just two. The Italians outhit Bosnia and Herzegovina 52 percent to 25.

Verica Simic put up six points with five kills and an ace to lead Bosnia and Herzegovina.