Stanford Adds Two Sweeps to Their Record this Weekend 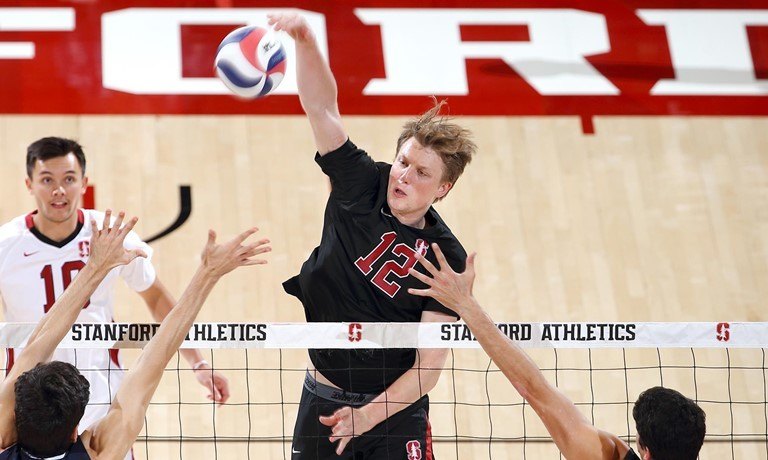 The Cardinals have had a great at home this week with two back-to-back sweeps against USC and Cal Baptist.

#8 Stanford dominated the Trojans on January 26, 2017 at Maples Pavilion in a 3 game sweep.

Freshman setter Paul Bischoff lead Stanford with 17 assists and helped the Cardinals reach a .304 as a team with only 9 hitting errors. USC only reached .070 attacking percentage and had 27 hitting errors in the match.

Middle blocker Kevin Rakestraw lead the Cardinals with 9 kills and had a season-best of 6 blocks. USC had 3 players that reached 8 kills.

As the Trojans work their new mid-season Brazilian addition Gianluca Grasso into the lineup, it hasn’t immediately swung their fates, but he did contribute 6 digs, 2 aces, and 2 kills coming off the bench.

Sophomore Jordan Ewert had a match-high of 12 kills as well as 3 aces. Junior Evan Enriques played against his younger brother, Cal Baptist libero, and lead the Cardinals with 10 digs.

Jackson Burge and Enrique Garcia both lead Cal Baptist with 7 kills each but it wasn’t enough and left the team hitting .118 attacking percentage.

Junior Kyle Dagostino came off the bench in all three sets to serve and stayed in to set, sparking the Cardinal offense down the stretch. The Tampa, Florida native finished with nine assists, two digs and a block.

The Trojans finished with more kills, assists and aces than the Cardinal, but Stanford’s 11.0 team blocks and 30 digs forced USC into errors it was unable to overcome.

The Trojans were without their top player, Lucas Yoder, who was out with a sprained ankle suffered in practice this week. But USC did get a contribution from their newest player, junior college transfer Gianluca Grasso of Brazil, who joined the team earlier this week. He had 6 digs, 2 aces and 2 kills off the bench.

Three Trojans each had 8 kills: Andy Benesh while hitting .615, Jon Rivera (hitting .385) off the bench and Woody Cook (along with 4 digs).

Gabriel Vegas added 6 kills and 2 aces for the Cardinal, while Stephen Moye had 5 blocks, Jordan Ewert had 9 digs and Evan Enriques had 6 digs.

Stanford went on a 6-point binge to open a 16-10 lead in the first set and was never threatened. In the second set, the Cardinal scored 4 of 5 early points to go up 7-4 and built the lead to 17-11 before USC clawed back to within 18-16, the closest Troy would get. Stanford got out to a quick 4-1 lead in the final set and the Trojans were never able to catch up.

USC next concludes its 5-match road trip when it visits No. 9 Pepperdine on Saturday (Jan. 28) at 2 p.m. in an MPSF match.

Sophomore Jordan Ewert pounded home a match-high 12 kills to go along with three aces, as Stanford (6-2, 3-0 MPSF) hit .295 overall while Cal Baptist was limited to a .118 attack percentage.

Coming off a sweep of USC on Thursday night, Stanford nearly led wire-to-wire in all three sets, remaining in front for all of the third.

The Cardinal is back in action next weekend for a road trip to CSUN (Friday, Feb. 3) and Long Beach State (Saturday, Feb. 4).