Stanford To Host Pair Of Ranked Opponents This Week 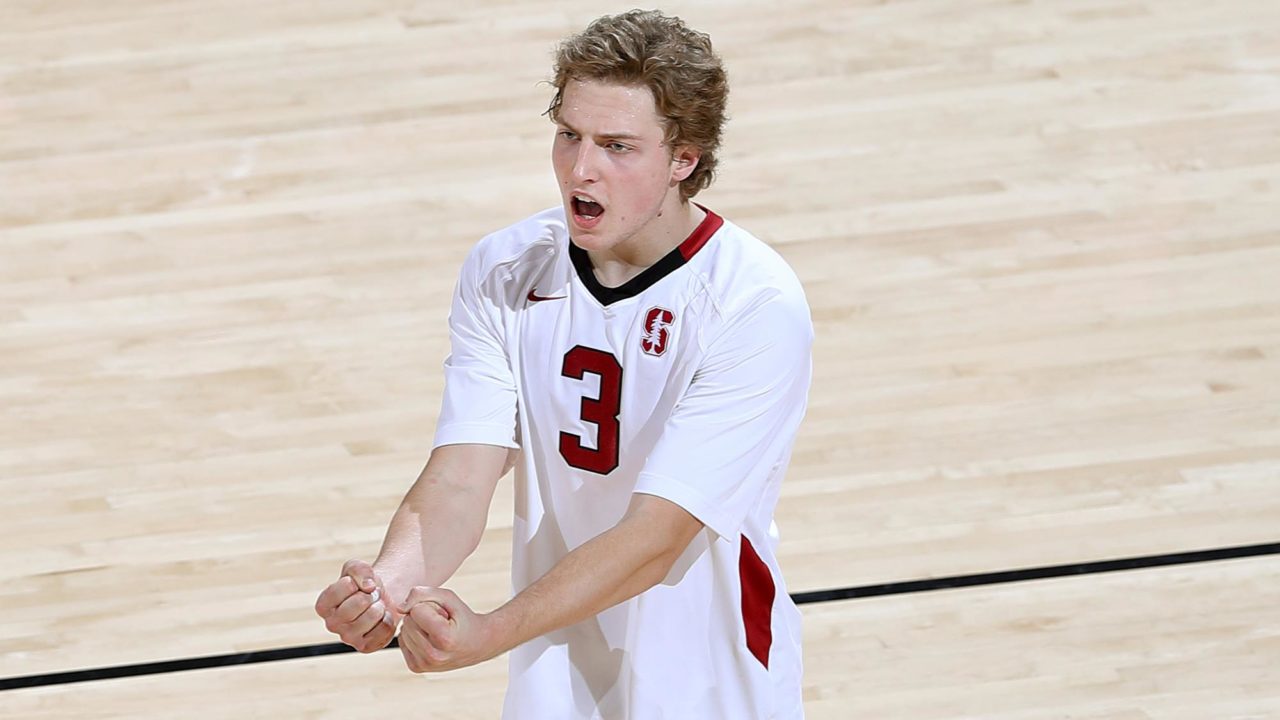 THIS WEEK: Stanford (3-13, 1-4 MPSF) begins a seven-match homestand this week, hosting No. 3 UCLA (14-4, 3-1 MPSF) on Thursday and No. 8 Pepperdine (9-3, 3-1 MPSF) on Saturday. Both matches are slated for 7 p.m.in Maples Pavilion.
CATCH THE CARDINAL: Both matches will be streamed live for free on pac-12.com. Live stream and live stat links for the matches can be found on the men’s volleyball schedule page on GoStanford.com.
ABOUT UCLA: The Bruins (14-4) are 3-1 in the MPSF and ranked No. 3 nationally. UCLA has dropped its last three matches after starting the season 14-1. The Bruins lead the MPSF in hitting percentage (.343) and kills per set (13.34), and rank second in aces per set (1.85). Junior setter Micah Ma’a controls the offense and leads the MPSF with 10.92 assists per set, while ranking third with 0.45 aces. Senior opposite Christian Hessenauer is third in the league in points (4.21) and sixth in kills (3.40). Sophomore middle blocker Daenan Gyimah paces the MPSF with a .500 attack percentage and is fourth in blocks (1.11). Stanford and UCLA met just once last season with the Cardinal outlasting the Bruins in five sets on Feb. 9 at Maples Pavilion.
ABOUT PEPPERDINE : Pepperdine (9-3, 3-1 MPSF) enters the week on a five-match winning streak, including a sweep over then-No. 2 UCLA last week. The Waves are holding their opponents to an MPSF-best .229 attack percentage. Pepperdine leads the league in aces (1.96) and is third in kills (12.28) and blocks (2.46). Junior outside hitter David Wieczorek paces the conference in kills (3.89), aces (0.53) and points (4.89), and ranks seventh in hitting percentage (.391). Freshman setter Robert Mullahey is second in the MPSF with 10.47 assists per set, while senior libero Weston Barnes is second in digs at 2.38.
LAST TIME OUT: Stanford played in its first home match in over a month, falling in four sets to then-No. 6 BYU. The Cardinal the pushed the Cougars to five sets on Saturday in Provo. Freshman opposite Jaylen Jasper posted a career-high 22 kills in Wednesday’s match and a double-double (18 kills, 12 digs) on Saturday. Senior libero Evan Enriques notched 10 and 11 digs, respectively, bringing his double-digit season total to five.
STATISTICALLY SPEAKING: Stanford ranks 13th as a team nationally with 12.17 kills per set and 21st with a .246 team hitting percentage. Individually, redshirt senior Kevin Rakestraw is 14th with a .388 attack percentage, while senior Evan Enriques is 22nd with 2.27 digs per set.
WHO’S IN?: With injuries and a young roster, Stanford has struggled to find a consistent lineup. The Cardinal has utilized eight different starting lineups in its first 16 matches. Freshman middle blocker Kyler Presho is the only Cardinal to start all 16 matches at the same position this season.
COACHES POLL: Stanford, along with Pepperdine, was picked to finish third in the MPSF by the league’s coaches. BYU, which received four first-place votes, was picked to win the MPSF for the third straight season, while UCLA collected two first-place votes and came in second.
NEW-LOOK MPSF: Each MPSF team will play 12 conference matches this season, featuring a home and away against each opponent. The 2018 MPSF Tournament begins with seed two, three and four hosting a quarterfinal match on April 14. The conference semifinals will be played on April 19 at the No. 1 seed. Semifinal winners will meet on April 21 for the championship with an automatic berth into the NCAA Tournament on the line.
NEWCOMERS: Freshmen JP Reilly (Manhattan Beach, Calif.) and Leo Henken (Webster Grove, Mo.) were named AVCA First and Second Team High School All-Americans, respectively. Jaylen Jasper (Annapolis, Md.), whose high school did not offer boys’ volleyball, was the No. 1 recruit in the class of 2017, as voted on for VolleyballMag.com, while Kyler Presho (San Clemente, Calif.) rounds out the Cardinal’s freshman class.
OFF THE BLOCK PRESEASON RECOGNITION: Stanford was one of three teams to land two players on the Off The Block/Springbak Preseason All-America teams. Senior Evan Enriques, who was the first winner of the Erik Shoji Award (2016), given to the nation’s top libero by Off The Block and a finalist for the award in 2017, was named to the first team. Fifth-year senior Kevin Rakestraw landed on the second team. Additionally, outside hitter Jordan Ewert received votes, which were collected from coaches around the nation.
2017 RECAP: Stanford finished the 2017 campaign 13-13 overall and  8-10 in the MPSF. After being picked to finish seventh by the MPSF coaches, Stanford tied for sixth and secured its ninth postseason appearance under head coach John Kosty. The Cardinal produced four all-conference selections and two AVCA All-Americans.
HEAD COACH JOHN KOSTY: Stanford head coach John Kosty is in his 12th season at the helm of the Cardinal program and his 28th overall on staff. He is 190-141 in his career and has guided Stanford to the 2010 NCAA national championship and the 2014 NCAA finals. The Cardinal has produced a first team AVCA All-America selection in eight of the past 10 seasons under Kosty. Stanford has appeared in the MPSF Tournament in nine of Kosty’s 11 seasons (missing out in 2007 and 2015).