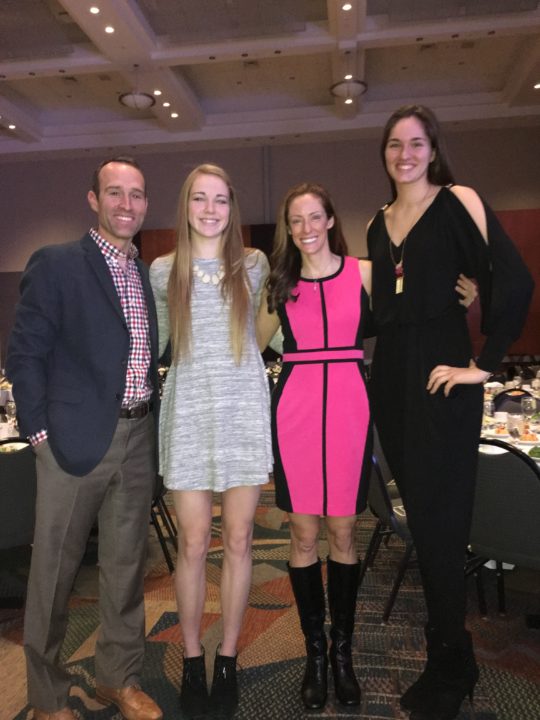 Stanford's Jenna Gray (left) and Audriana Fitzmorris (right) are relishing the opportunity to play in the Final Four near their homes in Kansas City. Archive Photo via Stanford Athletics

Defending National Champion Stanford may have one of the longer travels to this year’s Final Four, but a pair of Cardinal are flocking home by heading back to the Kansas City area. That would be Stanford’s Jenna Gray and Audriana Fitzmorris, who both made the AVCA All-America team as a first-teamer and second-teamer respectively.

Gray is from Shawnee, Kansas, while Fitzmorris is from Overland Park, Kansas – both suburbs of the Kansas City area. The two are more than familiar with each other as well, as the pair attended St. James Academy and are part of the same recruiting class.

Now they get to head back home for the Final Four to the appeasement of not just themselves, but their families as well. That should give Stanford a strong cheering section, as both Gray and Fitzmorris should have plenty of fans in attendance.

“I think almost all of my family is going to the Final Four,” Gray told VolleyMob. “Everyone lives less than three hours away from Kansas City, so I’m really excited to get to see them and finally play in front of them. It can be hard because we’re in the Pac-12, so we usually are playing too far away for them to come.”

Fitzmorris added that, “all of my family who are in the area are able to make it to the Final Four matches,” which should help in the Stanford contingent at a stadium where Nebraska fans have by far the shortest trip.

For anyone making that trip to the Sprint Center for Thursday, they’ll need to keep in mind that Kansas City, Kansas and Kansas City, Missouri are two separate entities, with the latter serving as the location for the Final Four.

“Everyone was really confused when they found out that it was in Missouri, but to be fair I still get confused between the Kansas and Missouri side of Kansas City,” Gray said.

That wasn’t the only confusing aspect for other Stanford team and classmates though. Living so far away in California, it can be a culture shock and a completely different style of life. With so many miles separating the two states, both Gray and Fitzmorris had to dispel some other myths.

“I always get asked if I live on a farm,” Gray told VolleyMob. “I get so annoyed with that question because I live in the suburbs that probably look just like everyone else’s homes. I also get a lot of Wizard of Oz jokes.”

The farm myths continued for Fitzmorris too, who also has to shove off the Wizard of Oz stereotypes.

“Contrary to popular belief, I do not live on a farm nor own ruby slippers, which is something I had to convince my freshman roommate of,” Fitzmorris said.

The conclusion to go to school halfway across the country wasn’t an easy one for Gray and Fitzmorris when taking into account being far away from family. Still, the two could lean on each other in attending Stanford after they both made the tough choice.

“The decision to go to school so far away was really difficult for me just because I can be a huge homebody and it seemed so intimidating going half way across the country,” Gray said. “Early in the recruiting process I promised myself and my mom that I would stay within driving distance… and then chose to go a couple thousand miles away. I’m really happy with my decision, though. I think being so far away has helped me grow up a lot faster than I may have if I were a couple hours away from my family.”

Gray only gets to go home very seldom now with her loaded schedule. She not only plays with the indoor team, but is on the beach squad as well as the track team for javelin. That limits her time home between winter break and a few weeks during the summer. The same can be said for Fitzmorris, who is plenty busy in her own right. That’s what makes this event even more special and something that caught Gray’s eye a few years ago.

“I’ve been excited for a couple years now,” Gray said. “One of my friends found out my senior year of high school that the Final Four would be in Kansas City in 2017 and texted me. It’s been on my radar for awhile, so I’m extremely stoked that it’s finally a reality.”

This will be the first Final Four in Kansas City since 2010 too. In that previous go around, both Fitzmorris and Gray attended and were filled with hopes for their volleyball futures.

“I remember participating in the youth volleyball clinic that took place during the weekend and lining up for autographs from the players following the match,” Fitzmorris said. “I remember watching Penn State’s player, Blair Brown, in admiration.”

“I believe that was the first Final Four I ever went to,” Gray added. “I remember being in awe of all of the players when the confetti came onto the court, hoping that I could be like them someday.”

Sure enough, Gray got to experience that last year along with Fitzmorris and her Stanford squad. It’s a feeling they are trying to replicate here in 2017. Beyond the volleyball court though, Gray and Fitzmorris have the plan set in place for where they would take everyone for the hometown experience.

“I would love to show my teammates Westport,” Gray said. “It has a lot of really cool shops, restaurants and coffee houses. The first place I would take them to eat at would be Jose Peppers. It’s right down the street from my house and I used to go there after school with my friends all the time.”

That wouldn’t be the only stop on the tour, as Fitzmorris also added in her two cents of where she’d like to show the team.

“I would love to show them so much of Kansas City and all of my favorite locations,” Fitzmorris told VolleyMob. “However, I unfortunately don’t know how much time we will have outside of the gym. It would be great to show them around the Kansas City Plaza and possibly the National World War I Memorial since we will be in the area.”

Oh, and by the way, Jenna Gray‘s favorite Barbeque place is Oklahoma Joe’s while Audriana Fitzmorris tabbed Gates as her top choice with Oklahoma Joe’s not too far behind. They’ll look to cook a strong Florida defense on Thursday night against at 9 p.m. ET on ESPN and WatchESPN with a spot in the National Championship on the line.