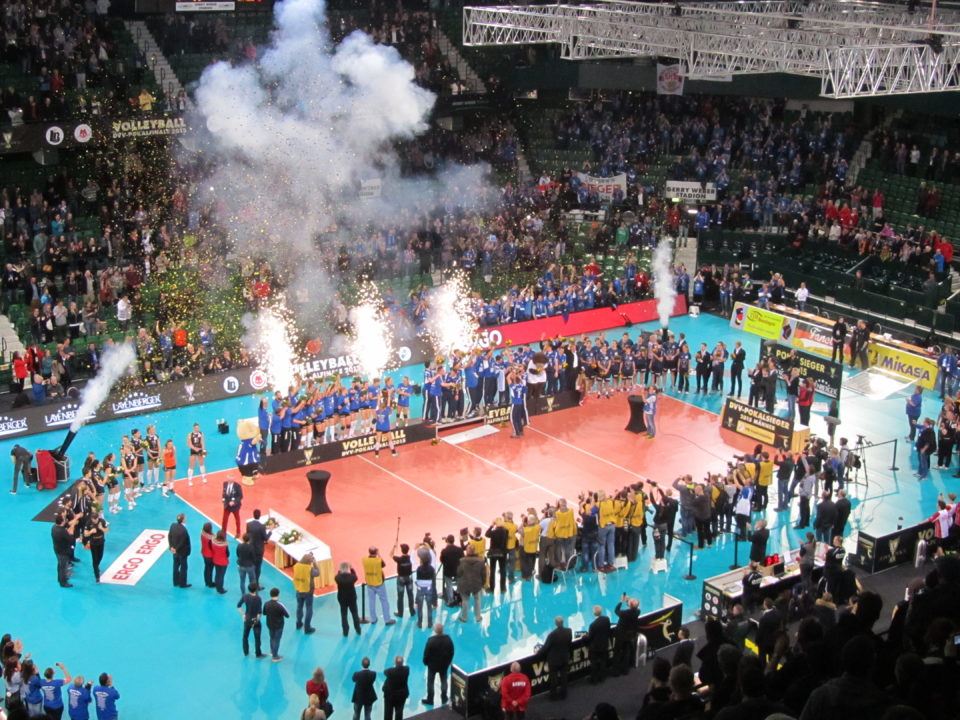 On January 29, 2017 the German Cup Finals came to an end with Allianz MTV Stuttgart crowned the women’s winner... Current Photo via MSchnitzler2000 from Wikimedia Commons

On January 29, 2017 the German Cup Finals came to an end with Allianz MTV Stuttgart crowned the women’s winner while VfB Friedrichshafen was crowned the men’s cup champion in Mannheim, Germany.

In an interview with FIVB, head coach Gullermo Hernandez stated that the setter Karmen Kocar played great and the “key” to winning was new players Sandor and Mlejnkova along with a change in the team’s rotation.

Head coach Vital Heynen stated “I suggest that we always play each set up to 30 points in the future because we play good when we play longer.”

Stuttgart had a good start but lost its momentum as Schweriner’s Jennifer Geerties and Lippmann scored on crucial plays, putting their team ahead in the first two frames.
Stuttgart setter Karmen Kocar, who came in as a substitute in the first three sets, changed the tempo of the game when she dished out excellent sets to her main hitters. Stuttgart overcame the tough third set on top 25-23.
Kocar’s playmaking brilliance in the third set allowed her to start the last two sets and get Stuttgart’s game together. Sandor and Mlejnkova delivered points that helped their squad gain control of the match.
“The key was the rotation change and fielding in two new players,” Stuttgart coach Guillermo Hernandez said. “Karmen Kocar played great.”
Meanwhile, VfB Friedrichshafen eluded Berlin Recycling Volleys in crucial moments to come up with a 3-1 (33-31, 25-21, 25-27, 30-28) win in the men’s final.
Friedrichshafen’s Michal Finger topped the scoring charts with 26 points, while Paul Carroll led BR Volleys with 16 points.
The first set was tight from the start and a series of lead changes followed when the score was deadlocked at 23-all that led to a slim 32-31 lead by Friedrichshafen. Tomas Kocian sealed the set for Friedrichshafen with an ace.
Friedrichshafen stayed focused and claimed the second set 25-21, but BR Volleys retaliated as Caroll teamed-up with Robert Kromm and Steven Marshall to claim the third set 27-25.
The Friedrichshafen frontline was persistent on offence and defence in the fourth set. Finger steered Friedrichshafen on the attack, until Mustedanovic scored on a great block to give their side an 18-17 lead. Another string of lead changes occurred until Andreas Takvam sealed the victory for Friedrichshafen at 30-28.