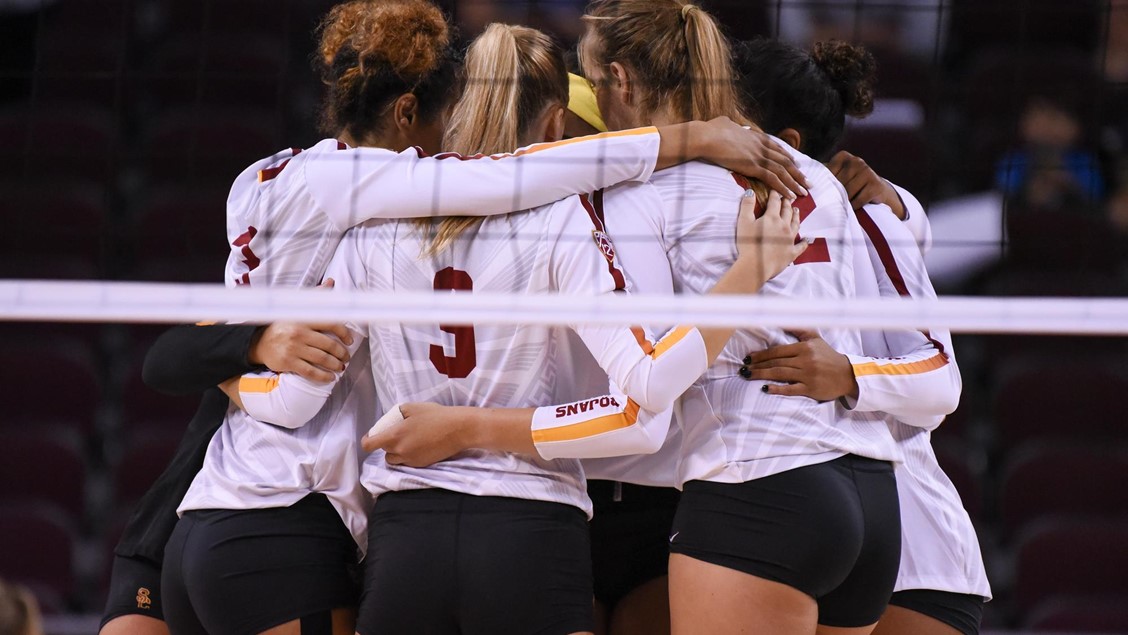 The #13 USC Women of Troy defeated Washington State in straight sets behind a 14-kill performance from junior outside Alyse Ford. The loss comes two days after the Cougars staged a dramatic upset of #17 UCLA.

With the first set knotted at 23, USC got back-to-back points on Ford’s seventh kill of the frame and a Withers ace to win 25-23. In the second, USC led 17-16 when a double block by senior middle Jordan Dunn and senior opposite Brittany Abercrombie launched an 8-point run to end the frame 25-16. The third was all USC and ended 25-13 on a Withers kill and Washington State error.

Next up, Washington State travels to Colorado for a Wednesday match against the #25 Buffaloes, while USC hosts Arizona State on Friday.

Ford hit .400 (4e, 25att) and got in on one of USC’s nine blocks. Freshman outside hitter Brooke Botkin continued to impress as she logged 10 kills (3e, 22att, .318) to go with eight digs, two blocks, and a service ace. Senior opposite hitter Niki Withers scored nine kills (3e, 18att) for a .333 hitting percentage and had a block and the service ace that clinched the first set for the Women of Troy.

The Trojans hit .337 (47k, 13e, 101att) in the match and had outstanding performances from senior setter Reni Meyer-Whalley who had 15 assists and seven digs; and sophomore setter Cindy Marina who posted 20 assists to go with a service ace. On defense, junior libero Victoria Garrick had 13 digs and four assists while sophomore Jenna Adams had six digs with a pair of key service aces.

For the Cougars, Ella Lajos had 10 kills and three blocks. Casey Schoenlein had eight kills but also had seven hitting errors. Setter Ashley Brown had 14 assists and seven digs.

The first set was tied 14 times and neither team could go on a big run until the Trojans seized control at 22-20. Despite a response from the Cougars to knot the score at 23-all, Ford’s seventh kill of the opening frame gave the Women of Troy set point before Withers scored an ace against WSU libero Alexis Dirige for the 25-23 win.

USC had a four-point lead erased by a short Cougar run but was in front, 17-16, when Dunn and Abercrombie teamed up for a block that sparked an 8-0 burst to end the set, 25-16, for the Trojans. Adams served back-to-back aces before an overpass kill by Dunn pushed USC ahead, 22-16. Dunn scored two more blocks down the stretch to help close out the set for a 2-0 Trojan lead.

The Women of Troy scored the first three points of the third set and were never threatened en route to a 25-13 win. The Trojans hit .483 and collected 17 kills (3e) on 29 attacks. Botkin had six kills, Withers had five kills, and Ford scored three in the win. Withers crushed her final kill of the match on a set from Garrick to give USC match point at 24-13, but it was Botkin who served out the final five rallies to put the match on ice.

Volleyball Falls in Three to No. 19 USC

WHY & HOW…
WSU Head Coach Jen Greeny said, “I don’t think we were real consistent with our skills. I thought we were pretty good in the first set but had some silly mistakes there. We passed pretty well in the first set and then the passing broke down a little bit. Hitting-wise, we struggled a little bit, especially our outside hitters, and that is what happens when you have to give them so many out-of-system balls. Teams are really keying on our middles and our outsides right now and we need more production out of our right sides.”

On the quick turnaround, playing Wednesday and Thursday this week, Greeny said, “It’s tough. Anytime you have a Sunday match and you have to turn around and travel and play Wednesday, especially back-to-back in the mountain schools where you have to fly in between. We’re going to do our best to get back into practice and get some rest as well. It’s a tough place to be in.”

WSU senior opposite Casey Schoenlein said, “Our serve-receive and our defense and all-around know the opponent was a lot sharper Friday’s match than today. We got flustered when we felt that we weren’t doing our jobs and we let one point lead into the next. At this point, we need to learn from this match and we need to flush it. If we dwell on the energy of not playing our best today it’s going to carry over into our Wednesday and Thursday matches. We need to focus on getting better for the short time we have and then applying it to our matches this week.”