The Dutch Outduel Japan for Pool A Supremacy 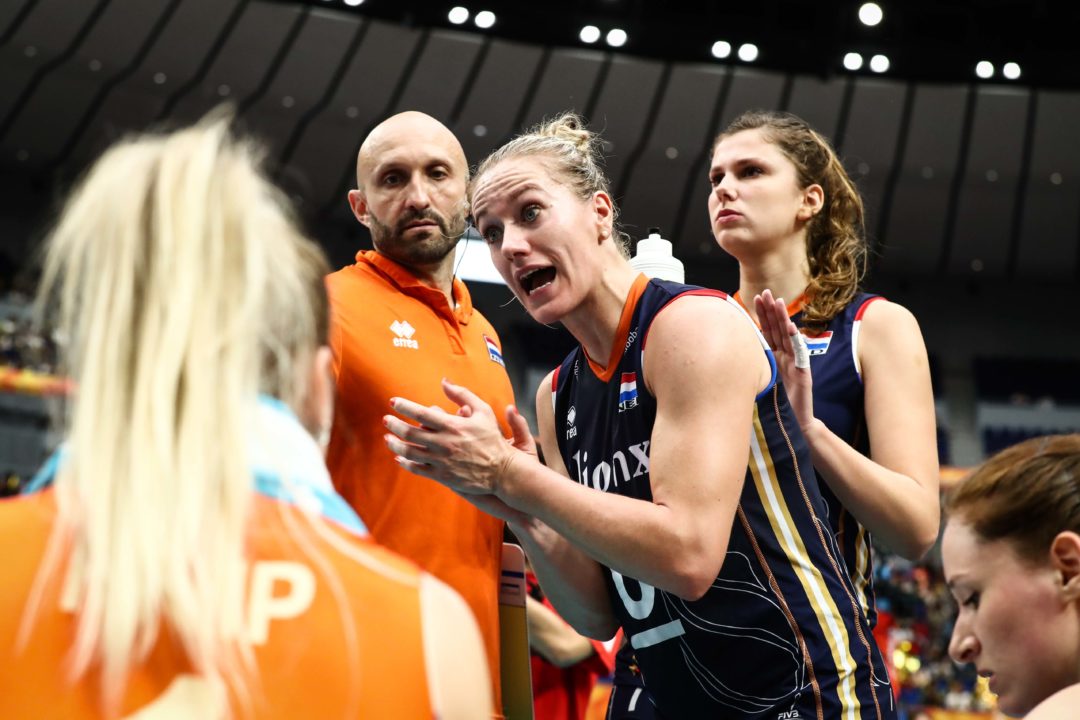 The Netherlands now have an inside track on preliminary perfection, while Mexico and Germany both bounced back with their first wins. Current Photo via FIVB

After a historic day 1 for the women of Cameroon at the 2018 FIVB Women’s Volleyball World Championship, where they won their country’s first-ever match of this tournament, reality set in on day 2 as they ran headlong into the German team, which handled them comfortably 3-0

That was the first of back-to-back sweeps on Sunday in Yokohama. Mexico, the team Cameroon beat a day earlier, took out Argentina in a tight 3-0 match. That was all a setup for the big show, and probably the most important match of the tournament, between the Dutch and Japan. The two teams traded sets all the way to a tie-breaker, which went point-for-point until the Netherlands took a 3-2 win.

Cameroon went for it in the first set of this match, but after it became clear that they were overmatched against Germany, they pulled most of their top players, including Laetitia Moma and Christelle Nana, to the bench and used the remainder of the match to build experience for their reserves.

Meanwhile, Lisa Grunding had a big day at middle blocker, hitting 7-for-8 and a dding 2 blocks and an ace. Germany, who also went to reserves late in the match, had a 7-6 blocking advantage and a 5-2 service advantage. Louisa Lippmann had 9.

Cameroon’s top scorer was Estelle Adiana, who had 9 kills on 25 swings.

“First of all I want to congratulate Cameroon for what they did yesterday,” German coach Felix Koslowski said after the match. “They achieved something that nobody expected by winning the first match here against Mexico, and that really alarmed us. I think they have grown a lot and I think it’s very good for volleyball if Africa does well. They really play good volleyball and they really deserve to be here at this World Championship. Of course today against us it was very difficult for them, my team were really focused from the first point until the last and we had a lot of respect for Cameroon. We made a lot of videos about them to understand what we had to do, because this match was very important for us to take the points towards our goal of getting into the next round.”

Cameroon’s post-match comments revolved around the fact that they came into the match knowing that they weren’t of Germany’s caliber, but that their goal was to beat Mexico, and having achieved that they are still happy.

Key stats of the match:

After becoming a footnote to Cameroon’s win on Saturday, Mexico bounced-back on Sunday to beat Argentina 3-0. The loss likely eliminates Argentina from advancing, as they’d need to scrape together 2 wins against Germany, Japan, and the Netherlands to do so.

USC alum Samantha Bricio, who was the standout of the loss (she hit almost 70%, highest among qualifying players in all pools on day 1) let Mexico again, this time with 21 points.

Against Argentina, though, it was her electric serve that made the day, as she put up 5 aces.

“I am very happy with this result, we knew this wasn’t going to be an easy match,” said the captain Andrea Rangel, who had 17 points in her column. “Argentina are big rivals for us, but we were able to believe in what we have been practising. That is why we were able to put out a very strong service today, and we will continue believing in what we have prepared.”

Even that effort, though, couldn’t overshadow the performance of 16-year old Melanie Quintero. The 16-year old outside hitter had 18 points, including 17 on 29 swings (59% hitting).

Key stats of the match:

In what became a defensive battle for the top of the table, the Netherlands beat Japan 3-2 on Sunday, which probably means they’ll win the group, having already beaten the pool’s two next-best teams: Japan and Germany.

Japan’s point for pushing the match to a tiebreaker means that they retain the 2nd position in Pool A.

Both teams had a pair break the 20-point barrier. All of the post-match buzz for the Dutch was about opposite Lonneke Sloetjes, who hit 16-for-39 and added 3 blocks ant 1 ace. But she was was outscored in the match by teammate Abbe Buijs, who had 18 kills, 2 blocks, and 1  ace for 21 total points.

The story for the Dutch women in the leadup to the World Championships has been positional battles at both middle blocker and at setter. In the middle, head coach Jamie Morrison has still not settled on the replacement for the injured Robin de Kruijf, as he has split sets between Nicole Koolhaas and Britt Bongaerts in both of the team’s matches so far. Yvon Belien has started all 9 sets so far in the middle for the Netherlands.

At setter, the veteran Laura Dijkema started the first two sets, and 22-year old Britt Bongaerts came in for her relief midway through, and then in the last two sets, the roles reversed.

With Pool A being arguably the weakest of the 4 preliminary pools, though, Morrison has time to experiment before the Dutch face real pressure in the 2nd round.

Japan was led by 25 points from Ai Kurogo and 23 from Sarina Koga, though neither player hit better than 36% en route to those totals. Kurogo added 3 aces to her 22 kills, and in typical Japanese fashion, the team was out-blocked 11-7, but out-aced the Dutch 10-4. Juliet Lohuis, who is usually a rocket at the stripe for the Netherlands, didn’t have any aces in 7 attempts.