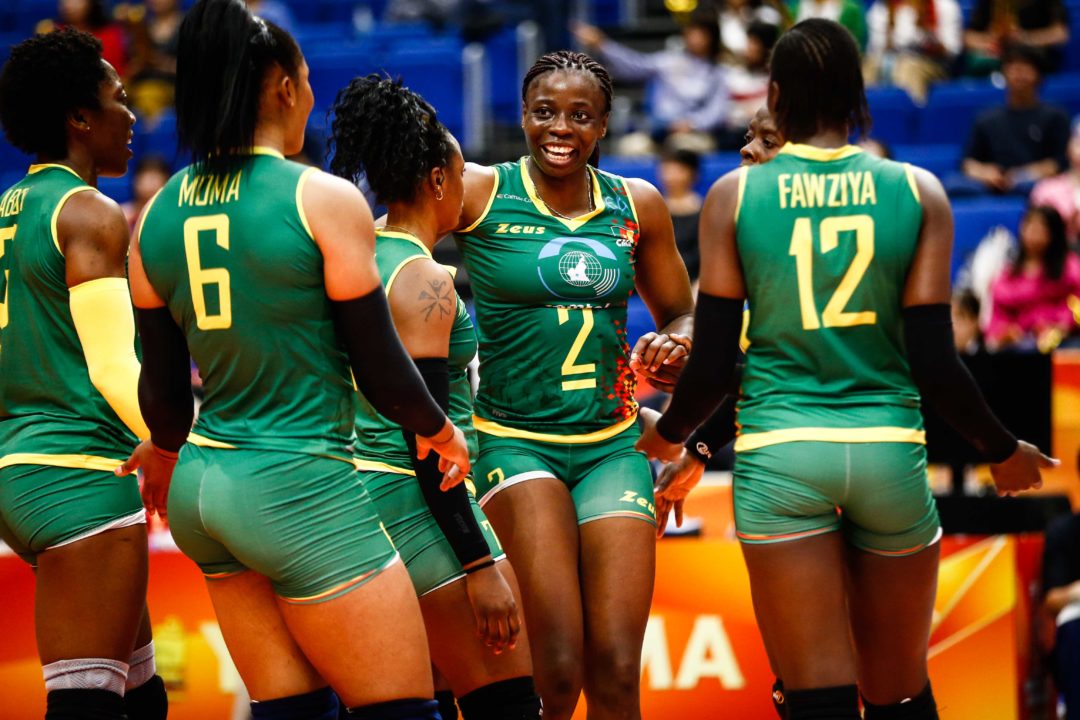 Cameroon made national and continental history on Saturday morning in Yokohama, Japan. Current Photo via FIVB

Japan, Netherlands, and Cameroon were the unsurprising day 1 winners in Pool A at the 2018 FIVB Women’s Volleyball World Championships. For Cameroon, that marked their first-ever World Championships win after going 0-5 in 2014 and 2016: their only two previous appearances. Not only was it their first victory, but it was the first victory for the entire continent of Africa, before Kenya followed with a 3-0 win over Kazakhstan in Pool D later in the day.

The African champions Cameroon made history on Saturday, winning their first-ever World Championship match by beating Mexico – who have lost their last 15 matches in this tournament, and haven’t won since a 3-0 sweep over Spain in 1982.

Cameroon was led by 21 points from Laetitia Assoko on 16/31 hitting, which also included 2 blocks and 3 aces in a well-rounded performance for the 25-year old outside hitter. Christelle Tchoudjang Nana followed her with 15 points.

Mexico was red by 20 points from Andrea Rangel, though it took her 49 swings (34.7% hitting) to get there. Samantha Bricio was much more efficient for the team, hitting 16-for-23 at outside hitter for 18 total points – as Cameroon focused on shutting-down Rangel in the match. The former USC Trojan is moving from Italy to Turkey next year for her 3rd professional season.

Yvon Belien follower her with 10 points (66.7% hitting), contributing to a 46.9% overall offensive effort for the Dutch women.

The top scorer for Germany was, of course, their dynamic 24-year old opposite Louisa Lippmann, who had 24 in the match. She went point-for-point with Sloetjes in the wild 4th set and scored 11 in that frame en route to her team-high in scoring.

Both teams had 7 blocks in the match, and Germany had a 7-5 advantage in aces. Lisa Grunding of Germany led all players with 3 blocks.

In the highest-attended match of Saturday’s opening day, Japan thumped Argentina 3-0. Argentina scored only 40 total points in the match, and weren’t able to crack 15 points in any one set.

The match marked the return to the team of Sarina Koga, and she responded with 15 points in just 3 sets on 14 kills and 1 block at outside hitter. Japan had an 8-2 service advantage in the match, including 3 from Risa Shinnabe and 2-each from Ai Kurogo and Erika Araki.

Argentina had contributions from lots of places, but no single player had more than 7 points. Elina Rodriguez led the team with 6 kills on 9 swings and 1 block.