More Sweeps in Pool D as Serbia, Kenya, and Puerto Rico All Win 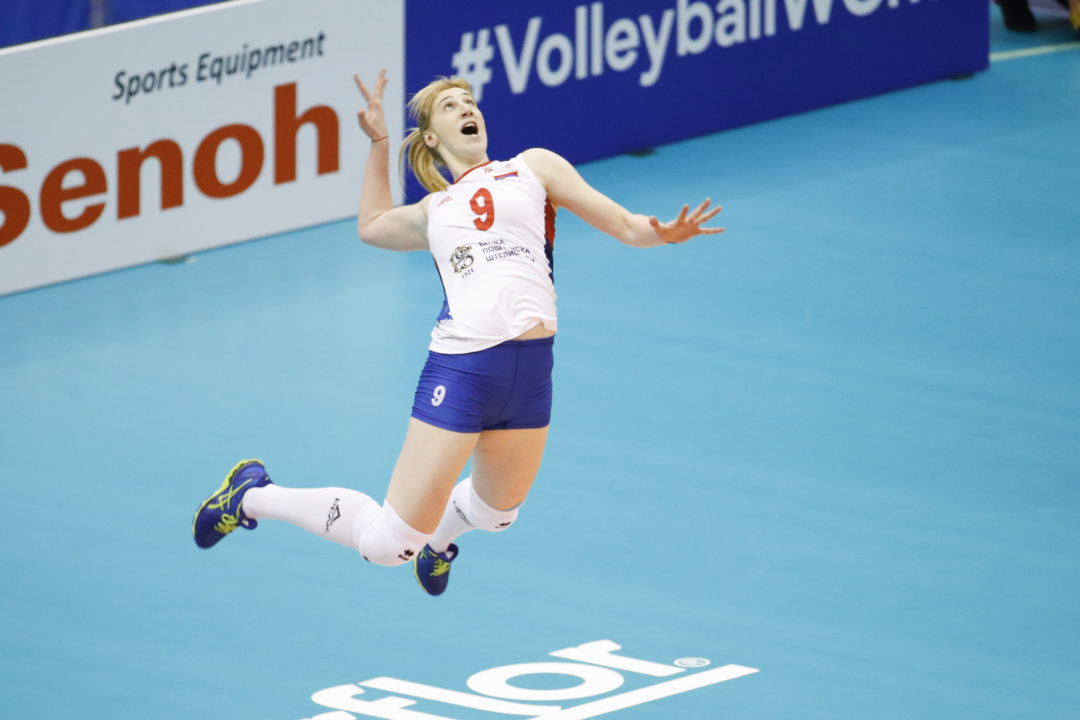 Pool D still hasn't seen a competitive match at the 2018 World CHampionships. That will (hopefully) change on Monday when Serbia and Brazil play. Current Photo via FIVB

The top two forces in Pool D of the 2018 Women’s Volleyball World Championship tournament, Serbia and Brazil, rolled through their 2nd-straight matches on Sunday in Hamamatsu via 3-0 sweeps and sit with identical records atop the pool.

Meanwhile, in the day’s biggest ‘rubber match,’ Puerto Rico topped Kazakhstan 3-0. That all-but-eliminates Kazakhstan from advancement to the 2nd round of the tournament.

Led by 15 points from Gabi, Brazil swept the Dominican Republic 3-0 to open Sunday’s play in Hamamatsu. In 2 matches so far in this tournament, Brazilian outside hitter Tandara Caixeta hasn’t yet led Brazil in scoring. After being a 30-point machine in the Nations League, she missed some of the team’s preparation for this tournament with a shoulder injury, which could be impacting her play so far this weekend.

Regardless, this was another dominant performance by Brazil. Caixeta had 14 points and hit 40%, while Fernanda Garay had 11.

The Dominican Republic was led by 10 points from opposite Gaila Gonzalez (9 kills, 1 block), with the team’s star Brayelin Martinez being held to just 7 points (6/22 hitting, 27%). Albeit the team’s 2nd match against a top team in the Pool, Martinez hasn’t been her usual explosive self in this tournament, hitting only 29.5% through 2 matches.

Puerto Rico kept their hopes of advancement alive by sweeping Kazakhstan on Sunday 3-0. They were led by 16 points each from Daly Santana and Stephanie Enright, and had a 9-1 service ace advantage in the match over Kazakhstan.

For the 2nd-straight game, Kazakhstan looked outmatched and disengaged from the tournament. Their captain Radmila Beresneva punted to her coach in post-match comments, and coach Shapran FVyacheslav blamed a lack of training after the Asian Games and injuries to some of their main players for the performance.

With the loss, Kazakhstan is all-but-eliminated from contention to advance to the 2nd round of the tournament.

A bright spot for Kazakhstan was the play of their middle blockers, and especially Yana Petrenko. She had 4 blocks in the match to lead all players, and Kazakhstan had an overall 11-7 blocking advantage in the match, in spite of Puerto Rico’s overall size advantage.

Just like their continental partners Cameroon did in Pool A, Kenya came back-to-earth after their history making, first-ever World Championship win on Saturday. They were handled by Serbia in just 61 minutes – the shortest match of the tournament so far – thanks to very few rallies and very few Kenyan points. Serbia very-nearly broke several defensive scoring records in the match, even holding Kenya to 8 points in the 3rd set when Kenya had all of their starters on the court, but Serbia was playing nearly a full lineup of reserves.

Jovana Stevanovic led Serbia with 9 points on 6-for-7 hitting, and was the only Serbian player to go the distance. Her 86% hitting wasn’t alone in the match – Brankica Mihajlovic hit 7-for-8 in 2 sets of play (87.5%), and Stefana Veljkovic hit 6-for-6 in 2 sets of play (100%). Serbia hit 62.1% as a team and now lead all nations in hitting success rate in the tournament.