Top Two Men’s Seeds Are Out in Gstaad, Dalhausser/Lucena Move On 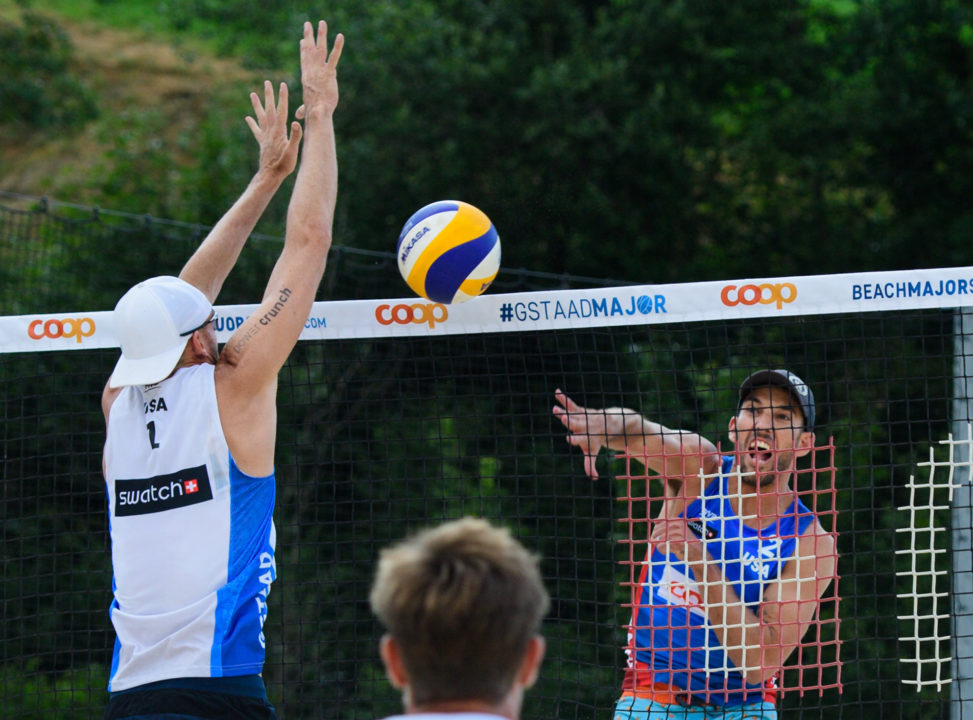 The top two seeds of the Gstaad Major on the men's side are out of the competition in a historic occurrence as both failed to win a match during the pool play stage.  Current Photo via FIVB

The top two seeds of the Gstaad Major on the men’s side are out of the competition in a historic occurrence. The dual eliminations marked one of the first times in the 32 year history of the FIVB World Tour that the top two seeds failed to win a match.

Americans Chase Budinger/Sean Rosenthal set the table for the historic oustings as the duo upset top seeded Brazilians Vitor Felipe/Evandro on Wednesday. No. 16 seed Ondrej Perusic/David Schweiner of the Czech Republic finished the job with a 21-19, 25-23 win in the Pool A finale. The pair of losses knocked Vitor/Evandro out of the Gstaad Major.

Adding insult to injury for Brazil was the fact that No. 2 overall seed Alison Cerutti/Andre Loyola also was eliminated without winning a single match. First, the pair fell to Italian qualifiers Andrea Abbiati/Tiziano Andreatta in straight sets on Wednesday, then No. 18 Martins Plavins/Edgars Tocs of Latvia outlasted them in tiebreak on Thursday.

Only one Brazilian team, Pedro Solberg Salgado/Bruno Schmidt, remains in the competition as George Wanderley/Thiago Santos Barbosa also lost both of their pool play matches.

No. 7 Clemens Doppler/Alexander Horst of Austria found themselves facing elimination as pool play wrapped up on Thursday, but hung on for a tiebreak win over Russia’s Viacheslav Krasilnikov/Nikita Liamin 22-20, 12-21, 20-18 to remain in the competition.

Another three-set victory moved Doppler/Horst on to the second elimination round on Friday. The pair outlasted Cherif Younousse/Ahmed Tijan of Qatar (21-17, 19-21, 15-11) in Round 1.

After friendly fire from Taylor Crabb/Jake Gibb in Wednesday’s Pool E title match put defending Gstaad champions Phil Dalhausser/Nick Lucena into Thursday’s first elimination round, the pair saw more friendly faces across the net, but this time returned to form with a win over countrymen Theo Brunner/John Hyden to move on to Friday’s Round 2 action.

Other elimination round winners, which will join Wednesday’s pool title winners, in Round 2 were:

Budinger/Rosenthal’s run at the tournament ended with a straight set loss to Pedro Solberg/Bruno Schmidt to cap the day’s action. 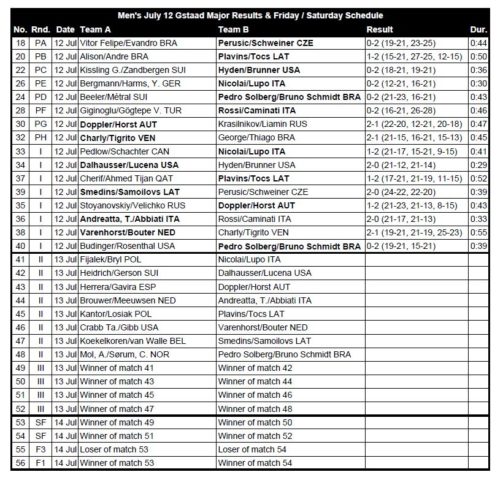