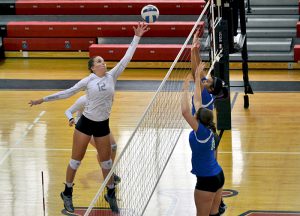 Montana State has added a transfer from the junior college ranks in former New Mexico Military Institute middle blocker McKayla Landreth. A junior-to-be come the fall, Landreth will have two years left of play and be immediately eligible.

Landreth spent two seasons at New Mexico Military, with her most recent resulting in a WJCAC All-Conference selection. In total for the year she logged 335 kills (2.20 per set) on a .228 hitting percentage, 151 blocks (0.99 per set), 19 digs and 10 aces. Behind her presence, the team ranked number one in the country in blocking.

“McKayla is a quick, explosive athlete who is going to contribute both offensively and defensively,” Montana State head coach Daniel Jones said in the team’s release of the addition. “She has competed at the national championship level in the junior college ranks, so comes with big game experience that will help us in the continued rise of this program.”

Jones added: “We are over the moon to have McKayla joining us. We are going to look to her to provide maturity and leadership.”

Montana State is coming off of a 10-15 record in 2017 in which they finished 6-10 as a member of the Big Sky Conference. Landreth will look to impact a win increase in 2018 as one of four middle blockers on the roster.