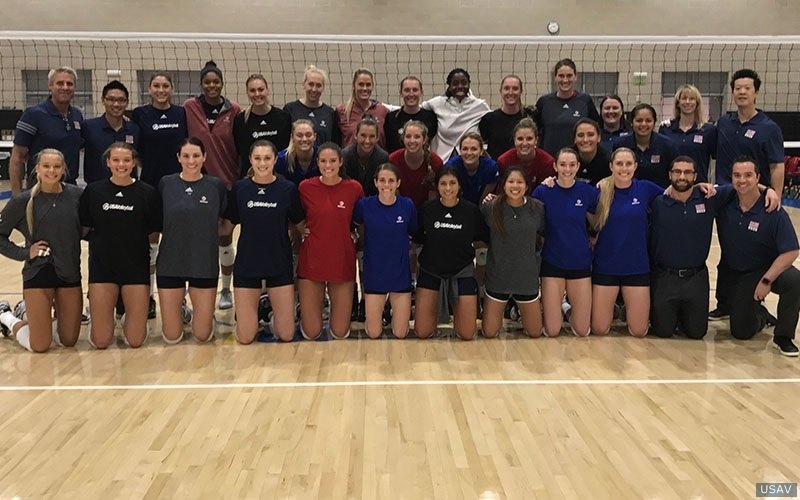 The U.S. named its 21-woman preliminary roster for the 2017 FIVB World Grand Prix, which begins in a month. The roster consists of four setters, three opposites, three liberos, six middles and five outside hitters.

The lone setter on the preliminary roster who was part of the 2016 U.S. Olympic team is Carli Lloyd. In addition to the bronze medal, Lloyd earned silver with Team USA at the 2016 FIVB World Grand Prix. Joining Lloyd at the position is former Michigan setter Lexi Dannemiller, 2014 AVCA Player of the Year and ex-Penn State Nittany Lion Micha Hancock and four-time All-American and recent graduate of Wisconsin Lauren Carlini.

The three opposites named are former Purdue Boiler Maker Annie Drews, 6’6″ Liz McMahon and Kelly Murphy, who started all eight matches in the 2016 Olympics at the opposite position for Team USA.

None of the three liberos were on the 2016 Olympic roster, as former Iowa State Cyclone Kristen Hahn joins two new graduates in Amanda Benson (Oregon) and Justine Wong-Orantes (Nebraska).

Of the six middle blockers on the roster, Tori Dixon and Lauren Gibbemeyer are the lone athletes with senior Team USA experience. Dixon is coming off a heart-breaking injury in early 2016 that kept her from earning a spot on the Olympic roster. She was able to make a comeback though in time for the Red-Blue scrimmage. Lauren Gibbemeyer didn’t head off with the Olympic team in 2016, but did win a gold with Team USA at the 2015 FIVB World Grand Prix. Former Texas Longhorn Molly McCage played last season in Germany and joins the other middles on the preliminary roster. The final trio all played collegiate volleyball last year, all presiding in the Big Ten. Amber Rolfzen won a National Championship at Nebraska in 2015. Hannah Tapp and her sister Paige Tapp were on back-to-back Final Four squads at Minnesota. Had Kadie Rolfzen made the cut, there would be two pairs of sisters on the preliminary roster.

Michelle Bartsch leads the outside hitter position, as she made the 2016 roster for the World Grand Prix. Megan Courtney from Penn State, Madi Kingdon of Arizona, Oregon grad Sonja Newcombe and reigning AVCA Player of the Year Sarah Wilhite of Minnesota round out the position.

The final evaluation leading up to the final roster decision was the Red-Blue intrasquad match. Megan Courtney led all scorers with 13 points. Madi Kingdon and Michelle Bartsch each had a dozen. All four setters played four sets in the match.

The U.S. Women’s National Team is approaching a couple of tournaments in the Pan American Cup and FIVB World Grand Prix. They’ll host Canada on June 13 as a warm-up before leaving for the Pan Am Cup in Peru that spans from June 17-25. That precedes the FIVB Volleyball World Grand Prix from July 7th until August 6th.