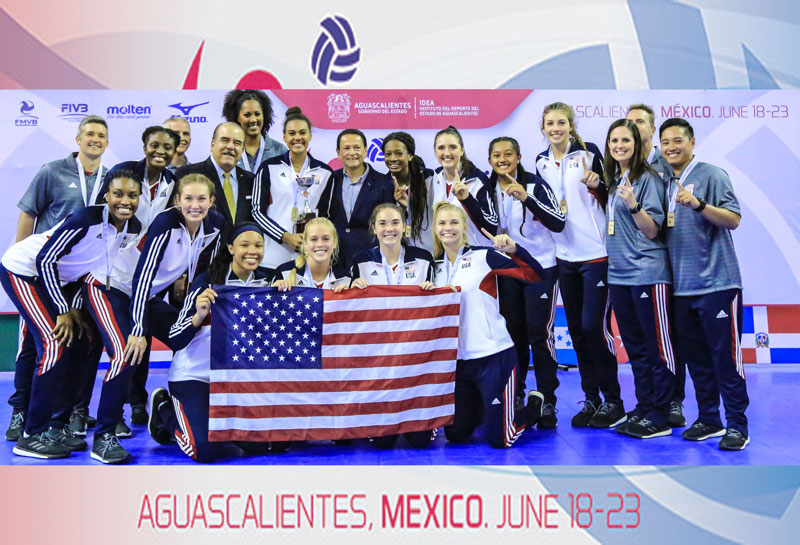 The Dominican side seemed to be stunned after a first-set lost and went into hibernation in the second, creating a hole that couldn’t be climbed out of. Sure enough, the United States Women’s Junior National Team downed the defending champions in this event in straight sets to earn Gold and a spot in the 2019 FIVB World Championship for the age group.

Maybe the biggest difference was the block, where Team USA notched a 14-5 edge to pair with their advantage in spikes (31-24), opponent errors (25-20) and aces (5-2). Middle blocker Molly Phillips (13 points) carried that block with seven while Madison Kubik (13 points), Skyler Fields (nine points) and NORCECA U20 Most Valuable Player Logan Eggleston (eight points) added to the versatility and balance. Natalia Martinez (11 points) meanwhile was not enough to carry the load.

Although the reward wasn’t quite as sweet playing for Gold and a chance at the Worlds, Mexico still had plenty of pride to play for in front of their home nation with a Bronze medal on the line. Sure enough, they downed Cuba in four sets to earn the top three finish.

Both teams brought it offensively and the blocks were close as well, but the Mexican serve may have been the difference. They also garnered a slight edge in the previous two categorizes along with three fewer team errors – numbers that all added up to a Mexican victory. That was all strung together once again by Uxue Guereca, who was unstoppable for the side with a tournament-best 30 points to carry the load.

Uxue Guereca captain of México: “Our heart is that of warriors, we kept our heads up. Our blocking was well positioned and they weren’t able to score easily. I practice hard to have strong spikes. We are all disciplined and dedicated. We are happy for finishing third, we would have wanted to qualify to worlds but I am satisfied.”

Regla Torres head coach of Cuba: “It’s more of the same, you learn how to play, playing, you can’t learn without performing. Again, my players are young, so our main goal is for them to have international experience, what’s left is to work from what happened here. I work the mental part with them, I have lots of faith in them, I am not unsatisfied with today’s performance, on the contrary, they did what they can at the moment.”

The Puerto Rican side blitzed Costa Rica in the opener and never looked back, winning every set by a sizable margin. It was all about the block (11-0) and serve (8-1 in aces) that fueled the Puerto Ricans to a top five finish. They also held every Costa Rican player to seven points or less with six players on the scoreboard while Puerto Rico had 10 players score in a spread-out attack led by Lyansca Correa (eight points) and Yamelis Mojica (four kills, three blocks, one ace, eight points).

Libero Ashley Roman of Puerto Rico: “We were strong, with lots of energy and confident in what we needed to do, we didn’t give anything away to Costa Rica. I am very happy with my team’s job and with my contribution; it’s an unforgettable experience.”

Andrés López head coach of Costa Rica: “This was our worst performance, we were unrecognizable and thus the result, a total catastrophe. My team lacked energy, they didn’t reach our goal, and clearly it leaves with a bad impression. Puerto Rico was always the same and didn’t give us break; so we will analyze what went wrong because we planned ahead.”

In a match that is about pride, Honduras avoided last place by sweeping Guatemala in the 7th place match. The two attacks were close together in terms of play, but the true determining factor was an 8-0 edge in aces and 5-1 advantage in blocks for Honduras while Nathaly Perez Jimenez (14 points) and Josselyn Waterhouse Vasquez (10 points) took care of the rest.

Osiel Vásquez head coach of Honduras: “Our expectation was to finish in straight sets. Guatemala stabilized their receiving and that’s why in the third set things got difficult. There is much too improve to play at a Continental level, the most important thing is to have more wing spikers, like Nathaly Perez.”

Carmen Elisa Gómez captain of Guatemala: “This was a learning experience; we have many weaknesses, mostly our attitude. Today with better attitude we held advantage in the third set.”