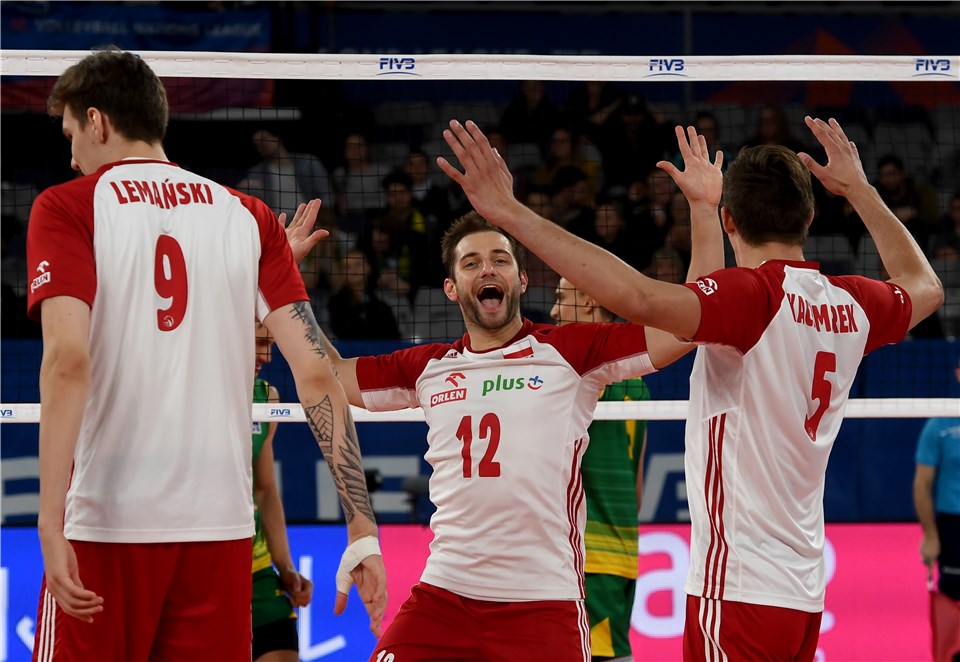 Poland's 3-0 sweep over Australia clinched the last spot in the Final Six on the final day of the pool play.  Current Photo via FIVB

Argentina finished their inaugural VNL campaign with a win over its continental rival, Brazil. The Argentines finished the pool 2-1 and leave Australia in 14th place.

Bruno Lima was the top scorer for Argentina with 12 points on 11 kills and a block while hitting nearly 50% for the match. Lisandro Zanotti (11), Agustin Loser (10) and Christian Poglajen (9) followed. Zanotti tallied eight kills, two aces and a block, while Loser chipped in a team-best four blocks to go with five kills and an ace. Poglajen, Lopez and Sebastian Sole rounded out the offense with seven, five and five kills respectively.

Brazil was led by Evandro Guerra and his 15 points (14 kills, 1 block), as the starting opposite in place of Wallace De Souza. Bruno Rezende got 23 points out of his middle blockers, Isac Santos and Eder Carbonera. Santos downed 10 kills and added three aces and two blocks, while Carbonera added six putaways and two stuffs. Douglas Souza (7), Mauricio Borges (5) and Lucas Loh (2) combined for 14 points from the outside.

Brazil and Argentina were essentially equal in blocks (4-3 in Brazil’s favor) and aces (Argentina with a 9-7 advantage). In  terms of kills, Brazil led Argentina with a 46-41 count. The big difference-maker in this match came in the amount of errors. Brazil committed 10 more errors than Argentina (20-10), and were outscored in the match by 9 points.

Argentina doubled their win total for the VNL in the last weekend of play. Their 13th place finish eliminates them from the competition. Brazil has already secured qualification for the Final Six coming into Sunday’s match.

Poland booked their ticket to Lille, France for the VNL Final Six with a 3-0 sweep over Australia on Sunday. Australia’s loss dropped them to a 5-10 record.

Poland’s captain, Mateusz Bienek, led the team with 11 points on 9 kills, 1 block, and 1 ace. The middle blocker hit 82% in the victory. The other middle blocker, Jakub Kochanowski, put up 8 points on 6 kills and 2 blocks while hitting 67%. Lukasz Kaczmarek scored 10 points and hit 53%, while Artur Szalpuk contributed 5 points off the bench. Bartosz Kurek (used as a substitute in the last two sets), Aleksander Sliwka, Bartosz Bednorz, and Bartlomiej Lemanski (also used as a substitute in the third) all scored 4 points in various roles for Poland. Pawel Zatorski got the start at libero for coach Vital Heynen.

Paul Carroll was the top scorer of the match with 15 points from 14 kills and 1 block. Trent O’dea, middle blocker, was the next-highest scorer with 8 points on 6 kills and 2 blocks. Paul Sanderson scored 7 points when he came off the bench for the last two sets to replace Thomas Douglas-Powell (3 points). Max Staples only hit 25% on his way to putting away 5 kills. Nehemiah Mote scored 5 points on 3 blocks and 2 aces in the middle. The setter, Arshdeep Dosanjh, finished with 2 kills, 1 block, and an ace.

Poland jumped out to an early lead in the first set and kept its foot on the gas pedal until Kaczmarek ended it at 25-16. Australia gave Poland all they could handle in the second set and had set point at 24-23. Poland stormed back to take the next 3 points and the second set. Australia fought throughout the third set and found themselves tied at 23-23 before Poland finished off the match.

Poland held the advantage in all of the major statistical categories, edging Australia 42-40 in kills, 7-6 in blocks, and 4-2 in service aces. Australia gave Poland 23 points from errors, while the victors committed 13.

This victory on the last day of the Preliminary Round ensured that Poland is the last team to qualify for the next phase of the tournament and effectively eliminated Italy ahead of their match against the United States.

Poland coach Vital Heynen: “We played an OK match, but not super. We had to adapt to Australia’s change in players. Australia did a good job by really pushing us in the second set. My guys were playing for qualification today, so there was some stress in the team. It’s OK because it’s match 15 in four weeks. I’m just glad it’s over and we will now go to the finals.”

Australia coach Mark Lebedew: “The result was disappointing but the performance was pretty good. It was our best of the weekend and that was important. It shows how much we still have to do before the World Championship, but I’m pleased we played somewhere close to our best at home in front of our fans.