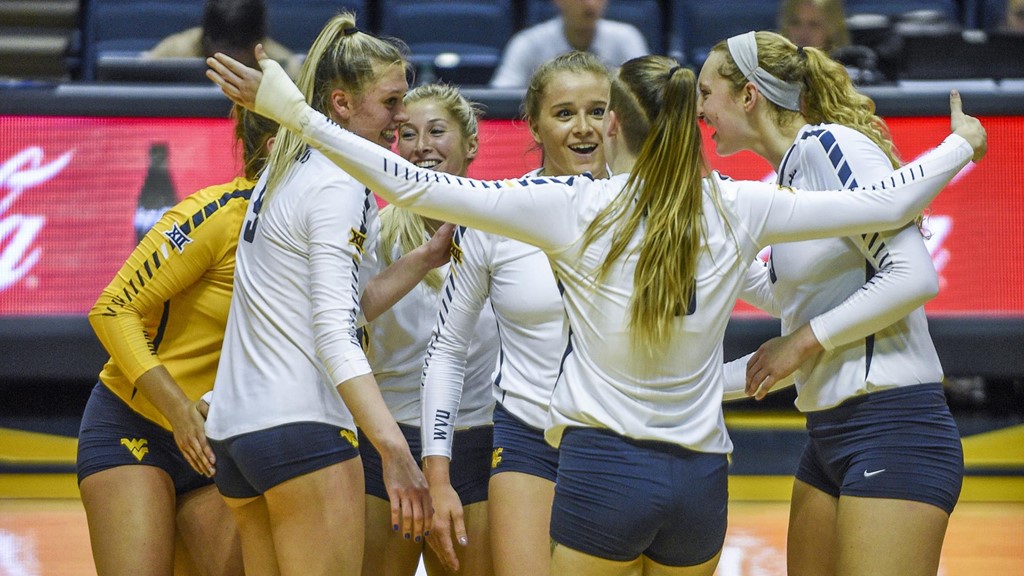 For the second time this week, CUE COUNTRY ROADS!

With today's win, the Mountaineers have defeated a top-25 opponent for the first time in program history! #HailWV pic.twitter.com/thmhiOJIeI

The West Virginia Mountaineers defeated the #15 Kansas Jayhawks in a five-set thriller, recording the program’s first-ever win over a Top-25 opponent. Prior to today’s victory, Kansas held a 13-o series advantage over the Mountaineers.

“It was a great week for us,” stated West Virginia head coach Reed Sunahara. “Kansas is a top-15 team, and it was a great test for us to overcome adversity. I’m so proud of the way we battled. They just never gave up. It was unbelievable. To have the seniors go out with a win like today, I couldn’t have asked for anything better.”

The upset also spoiled Senior Day celebrations for the most successful class in Kansas volleyball history, having compiled a 101-22 record over the past four seasons. Two seniors also rank as all-time statistical leaders for the Jayhawks: setter Ainise Havili holds the career assists record with 5,209, and opposite Kelsie Payne became the kills leader with her first kill of the match. She now has an even 1,500 kills for her career.

“This senior class has been very tight-knit and done some great things through the years,” Kansas head coach Ray Bechard stated. “They have helped three other KU senior classes win on their Senior Day and won over 100 matches overall. This is the most current in our minds, but you have to look at the body of work in their four years here and be very proud of them.”

Currently ranked #12 in the latest RPI, the loss may also impact the Jayhawks’ chances of getting a seed and hosting the early rounds of the 2017 NCAA Tournament. Kansas will learn its tournament fate on Sunday night at 8 p.m. CT on ESPNU.

MORGANTOWN, W.Va. – Capturing its first-ever win over a top-25 opponent, the West Virginia University volleyball team topped No. 14 Kansas in a five-set thriller on Saturday afternoon at the Horejsi Family Athletics Center in Lawrence, Kansas.

With today’s win, the Mountaineers have won 18 matches in a season for the first time since a 20-13 season in 2013. With 18 wins this year, third-year coach Reed Sunahara has earned his highest win total as head coach of the Mountaineers. WVU also marked a 6-10 Big 12 Conference record, matching its six-win total from 2014.

“It was a great week for us,” Sunahara said. “Kansas is a top-15 team, and it was a great test for us to overcome adversity. I’m so proud of the way we battled. They just never gave up. It was unbelievable. To have the seniors go out with a win like today, I couldn’t have asked for anything better.”

Sophomore outside hitter Payton Caffrey led the offense once again, hitting .308 with a season-best 28 kills to go along with 13 digs and three service aces. Sophomore right side hitter Natania Levak finished the match with 11 kills, while senior middle block Mia Swanegan added nine for a .250 hitting efficiency.

An early 6-0 run by West Virginia put Kansas in a 10-6 hole, but the Jayhawks quickly recovered to take the first-set victory, 25-20. KU notched three straight points following back-to-back kills and a WVU ball handling error to tie the set at 11-all. From there, the Mountaineers used a 3-0 scoring streak of their own to regain the lead at 14-11 before the Jayhawks captured six of the next seven points for the 17-15 advantage. Back-to-back Kansas kills forced West Virginia to take a timeout at 19-17. Caffrey followed by putting one through the pins to bring the Mountaineers within one at 19-18. However, Kansas capitalized on three Mountaineer attacking errors in the final six points for the 1-0 match lead.

The Mountaineers improved in the second set, hitting .314 to pick up the 25-19 victory. After playing to seven ties, West Virginia capitalized on a KU miscue and a kill from Levak for a 16-14 lead. The Mountaineers then used a four-point scoring streak to take a 20-15 advantage and never looked back. A Caffrey kill brought the Mountaineers to set point at 24-18 before a kill from Payne extended the set. However, Caffrey found the floor once again, as WVU won the set, 25-19, to tie the match at 1-1.

WVU jumped out to an early 5-1 lead in set three, but the Jayhawks came back with a 6-0 run of their own to take a 7-5 advantage. The Mountaineers then answered with five straight points to regain the lead at 12-8. A late 3-0 run from the Jayhawks forced a WVU timeout, down 18-16. Caffrey added a kill before Kansas threw down a pair of kills for a 20-17 advantage. A kill from Caffrey and Levak brought the Mountaineers within two, down 22-20, but the Jayhawks rattled off three straight points to close out the frame, winning the third set by a score of 25-20.

Back-to-back-to-back kills from the Mountaineers gave WVU a 10-6 advantage in the fourth set. However, the Jayhawks used a pair of scoring streaks to gain a 15-13 lead midway through. Both squads continued to exchange points before the Mountaineers tied the set at 22-22 with a kill from Levak. From there, West Virginia took advantage of back-to-back KU attacking errors, bringing WVU to set point. Sophomore outside hitter Katelyn Evans then laid down a kill, as the Mountaineers picked up the 25-22 win to tie the match at 2-2.

Down 9-8 in the fifth set, West Virginia took a timeout. Swanegan and Caffrey came up with big swings out of the stoppage, as the Mountaineers went on a 3-0 run to take an 11-9 lead over the Jayhawks. Kansas continued to put up a fight though, capitalizing on a Mountaineer attacking error to tie the set at 12-all. However, three straight kills from the Mountaineers, including two from Caffrey, gave WVU the 15-12 fifth-set win and the 3-2 victory in the contest.

Of note, the Mountaineers have now won three of their last four matches in Big 12 play.

West Virginia will await its postseason fate, as the Mountaineers NCAA Tournament hopes are still alive thanks to clinching a winning record. The NCAA Division I Selection Show will air on Sunday, Nov. 26, at 9 p.m. ET.

The 14th-ranked Jayhawks’ loss proved to be an unfitting end to one of the most successful senior classes in program history, which had entered Saturday with 101 wins, a Final Four appearance, KU’s first-ever conference title and a combined six All-America honors.

“This senior class has been very tight-knit and done some great things through the years,” Kansas head coach Ray Bechard said after the match. “They have helped three other KU senior classes win on their Senior Day and won over 100 matches overall. This is the most current in our minds, but you have to look at the body of work in their four years here and be very proud of them.”

“We had 10 more kills, hit 70 points higher, out-blocked them and had more digs, but the service line really bit us — 13 service errors with one ace,” Bechard said. “Let’s give West Virginia credit. They have been playing well as of late. They deserve to win.”

West Virginia (18-12, 6-10) was led by Payton Caffrey‘s 28 kills and three aces. Saturday marks the first-ever victory for WVU in the 14 all-time matches between the Jayhawks and Mountaineers.

Despite the loss, the day was nonetheless historic for the Jayhawks.

The first of Kelsie Payne‘s team-high 17 kills will go down in the record books, as the senior All-American set KU’s all-time record for career kills with the first point of the match. Payne broke Josi Lima’s 12-year-old record of 1,483 kills, set in 2005. The Austin, Texas, native ends the regular season with 1,500 career kills — alone atop the list of most prolific attackers in KU history.

Senior All-American outside hitter Madison Rigdon registered 16 kills and 19 digs for her 12th double-double of the season and 31st of her career. Senior All-American setter Ainise Havili led Kansas to a team hitting percentage of .300 or better for the 10th time this season with 54 assists and nine digs.

Three defensive specialists started the match for the Jayhawks with Addie Barry getting the senior-day nod — her first start since 2014, Tori Miller starting for the sixth-straight match and Allie Nelson completing her first full regular-season as KU’s starting libero. Nelson led the trio with 17 digs, while Miller registered 15 digs for the second-straight match.

All 13 matches at Horejsi Family Athletics Center this season have been sold-out capacity crowds, including an exhibition contest. With Kansas City-area native Mia Swanegan on its roster, West Virginia brought the largest group of visiting fans to Horejsi this season with 62 on the team pass list.

UP NEXT
Kansas will await its seed in the upcoming NCAA Volleyball Championship. The 64-team bracket will be revealed on Sunday evening (8 p.m., ESPNU). Kansas is looking to make its sixth-straight tournament appearance while also vying to host the first- and second-rounds for the sixth-straight season.