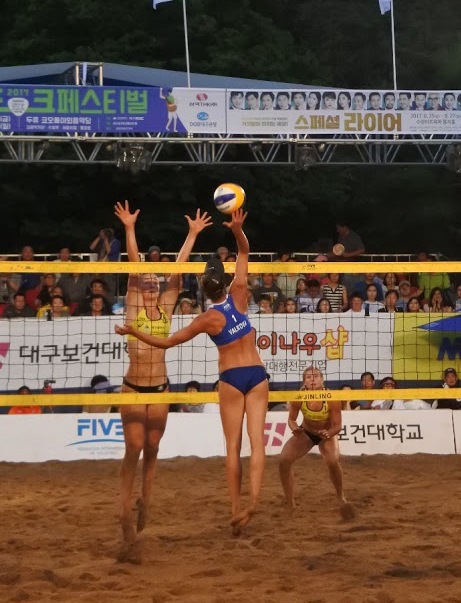 The top two seeds as well as a pair of upset minded duos will make up the semifinal field of the Daegu One-Star after the first and second rounds wrapped up on Saturday morning.  Current Photo via FIVB

The top two seeds as well as a pair of upset minded duos will make up the semifinal field of the Daegu One-Star after the first and second rounds wrapped up on Saturday morning.

American’s Amanda Dowdy and Irene Pollock moved on to the second round as did Thailand’s  Varapatsorn Radarong and Tanarattha Udomchavee in the final two first round matches early Saturday morning.

A few hours later, the pairs alongside the six match winners from Friday began second round action.

Top seed Miki Ishii and Megumi Murakami of Japan moved on to the semifinals, as did Germany’s Lisa Arnholdt and Leonie Welsch, who pulled off a first round upset of the tournament’s No. 3 seed on Friday. The Czech side of Katerina Valkova and Diana Zolnercikova also continued their upset run after knocking off the No. 4 seed in the first round.

Ishii/Murakami will face Valkova/Zolnercikova, while Radarong/Udomchavee will take on Arnholdt/Welsch for a spot in the finals. The matches begin at 2 a.m. ET Sunday. The podium matches will be played at 6 and 7 a.m.