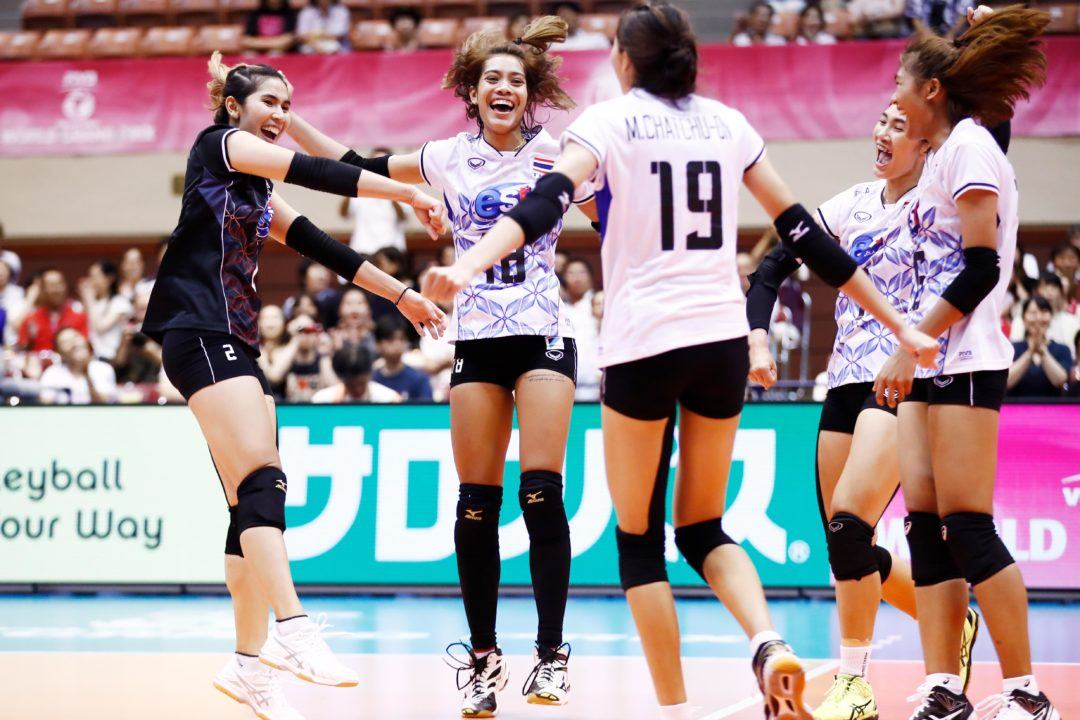 Thailand score their first win of the 2017 FIVB World Grand Prix with a three-set stunner over Brazil. Current Photo via FIVB

After going 0-4 and losing 12 of 16 sets, Thailand was sitting in 11th place of the overall Group 1 table. That was until today when they not only stunned Brazil, but also did so in a three-set sweep.

The team that fell to Brazil yesterday was Serbia, who bounced back with a win over Japan. Now, Pool D1 is a mess front-lined by tiebreakers as every team owns a 1-1 record.

Behind a deadly offense and seemingly non-existent one for Brazil, Thailand pulled off the upset in sweeping the defending World Grand Prix champion. In total, Thailand had 32 kills to Brazil’s 16. Even more remarkably, Brazil had just as many errors as they had kills, while Thailand only had three.

Neither team showed a dominant serve or block in the match, although Thailand’s effected the Brazilian attack a lot more than the other way around. The leading point-collector for Brazil was Drussyla Costa, who had just four. Meanwhile, for Thailand, Pleumjit Thinkaow and Ajcharaporn Kongyot recorded 10 points each.

“The best thing about today was that we played as we planned maximizing the particular skills of each player,” Thailand head coach Danai Sriwacharamaytakul told FIVB post-match. “Brazil has such a high block and they’re strong, and they can play quickly. So it was tough to get every point against them. They made some service errors today, and that gave us a chance to play our games, to play our combinations. And I think we played as a team, together, and the result was a good game.”

It’s win number one for Thailand in the tournament and gives them some separation over Belgium for last in that relegation spot. The result also puts Thailand atop the pool table as they will face Serbia – the current leader of the overall Group 1 table – tomorrow looking for another upset.

The loss isn’t crippling for Brazil, but it does hurt. They sit in second place in the pool with Japan tomorrow and an opportunity for a winning record in back-to-back weeks. However, after winning the event last year, they’ve already been swept twice this go around. Still, Brazil ranks fourth in the overall Group 1 standings and are currently in good shape.

A strong block and attack pushed Serbia to a three-set win over Japan. No set was far apart, but Japan never truly looked like a threat to take any of them late either, as Serbia won each by four or five points.

In total it was 45 kills and 13 blocks for the European side. Japan only knocked down 33 kills to go with six blocks in the match, creating a 19 point disparity. Sarina Koga tried to keep Japan steady on offense with her 15 points, but it wasn’t enough to overcome four different Serbians who scored in the double-figures.

It was a big win for Serbia to bounce back after they suffered their first loss of the tournament at the hands of Brazil yesterday.

“The most important thing today was that we played better than yesterday, and that’s for sure,” Serbian captain Milena Rasic, who led the team with 18 points, told FIVB after the match. “It’s always hard to play Japan and their quick volleyball. We had to defend and block better today, and I think we did it well, and that was the main reason why we won.”

Serbia is in third of the pool standings, but only due to tiebreaker. Although winning the pool presents more money to a team, the bigger picture is the overall Group 1 table, where Serbia is the leader at 4-1 with 12 points. They’ll finish up the week with Thailand, the top team in the pool standings, and a chance to finish in the top two of the pool with a winning mark.

Japan’s loss means they will have to take down Brazil tomorrow to finish with a winning record in each week of pool play so far. It’ll have added importance as Brazil is in fourth of the Group 1 standings while Japan is just on the outside looking in as they are in seventh. Both teams have 3-2 records though, so a win for Japan would loom large with just four matches left before the final six.