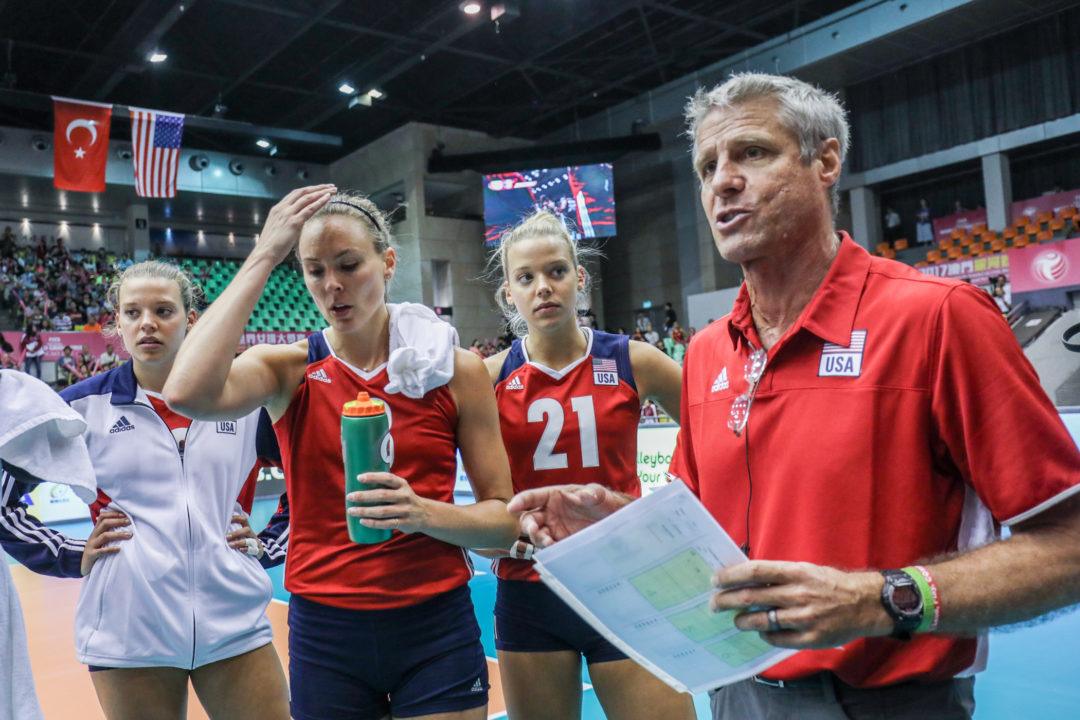 Italy gave the United States its first loss of the tournament while moving up to the top of the pool standings. Current Photo via FIVB

Team USA started the day as the only undefeated team left in the 2017 FIVB World Grand Prix, but they didn’t make it out unscathed. The Italian side scored a big victory for many reasons – revenge for a 3-0 loss, it moves them into the top six and it puts them on top of the pool standings.

In the second match in Macau, the home team China defeated Turkey in four sets. The win puts China in the top five at the tournament so far and ends a two-match losing streak while extending Turkey’s losing streak to three.

Although they had a match filled with errors, Italy was the more aggressive team in giving Team USA its first loss of the 2017 FIVB World Grand Prix. The Italians had 34 errors as a team to the United States’ 13. However, the European side also had more kills (65-57), blocks (12-8) and aces (10-7). The Americans did have more total points, but that was fueled by a dominant fourth set.

The first two sets presented a 1-1 match with both teams even in total points. After Italy won the third set, the U.S. Women’s National Team stormed ahead and won the fourth 25-13. However, the momentum did not carry over and Italy held a tight lead through most of the fifth for a 15-13 victory.

“I would like to congratulate Italy and especially Davide (Mazzanti) for doing a great job,” U.S. Women’s National Team head coach Karch Kiraly told FIVB post-match. “They are playing good volleyball this weekend, especially against China yesterday. These matches are not fun to lose, but they are really fun to compete in. It was back and forth and it was very fierce competition that makes both teams better. It is like a dance, they dance well and we dance well and that is great for competition. We have to look to get better tomorrow when we face a good China team and we are looking forward to learning from the challenges of this match.”

The United States was led by three players with double-figure points: Madison Kingdon (20), Michelle Bartsch-Hackley (20) and Kelly Murphy (14). For the Italian side, Paola Ogechi Egonu dominated with 31 points and was supproted by Miryam Fatime Sylla (16 points) and Cristina Chirichella (15 points).

“It was definitely a difficult match,” Italian head coach Davide Mazzanti said following the team’s victory. “We had problems with our reception which of course made it hard for us to attack. During the course of the match USA made some changes to their lineup and it was difficult for us to adjust, but this is also why it was such a great lesson for our team.”

Italy now moves to 2-0 in Pool E1 and after starting the tournament at 0-2, have risen to 3-2. That puts them in sixth place of the overall Group 1 table as they will face Turkey tomorrow in search of an undefeated week two.

Team USA looks to regroup for the first time in the tournament. They still are in second overall in Group 1 though as they get China tomorrow in a rematch of a United States’ sweep from week one.

China pulled out the win by taking three close sets all by the same score (25-23). With Turkey’s second set win, each team ended with the same amount of total points, but only China walked away from the match adding something to their place in the standings.

Meliha Ismailoglu (17 points) and Melis Durul (15 points) combined for 27 kills in the match and were key in Turkey tying the match at 1-1 in sets. Chinese captain Zhu Ting has been resting in the early sets (either as a substitution or not playing at all) so far in the World Grand Prix due to fatigue and China has been a whole new team with her in the lineup. After coming on as a sub in the first two sets, she started the third and fourth and logged 11 points to help China get the four-set victory.

“We fought hard to win this match, and comparing to yesterday I think we did a better job at executing the key points and controlling our emotion,” Ting told FIVB post-match. “Turkey gave us a lot of pressure with their blocking and defense and we have enjoyed a good game against them.”

With the win, China is now in third of the pool standings with a chance to move up more tomorrow against the United States. That will be a meeting of two of the top five in the Group 1 standings, as the Asian side now sits in fifth.

For Turkey, they are now riding a three-match losing streak and are in 11th of the 12 team Group 1 table. On the bright side, they have a win and four point cushion on 12th-place Belgium for that relegation spot. Another win tomorrow against Italy would go a long way in avoiding that position and even keep them alive for the race to the final six.