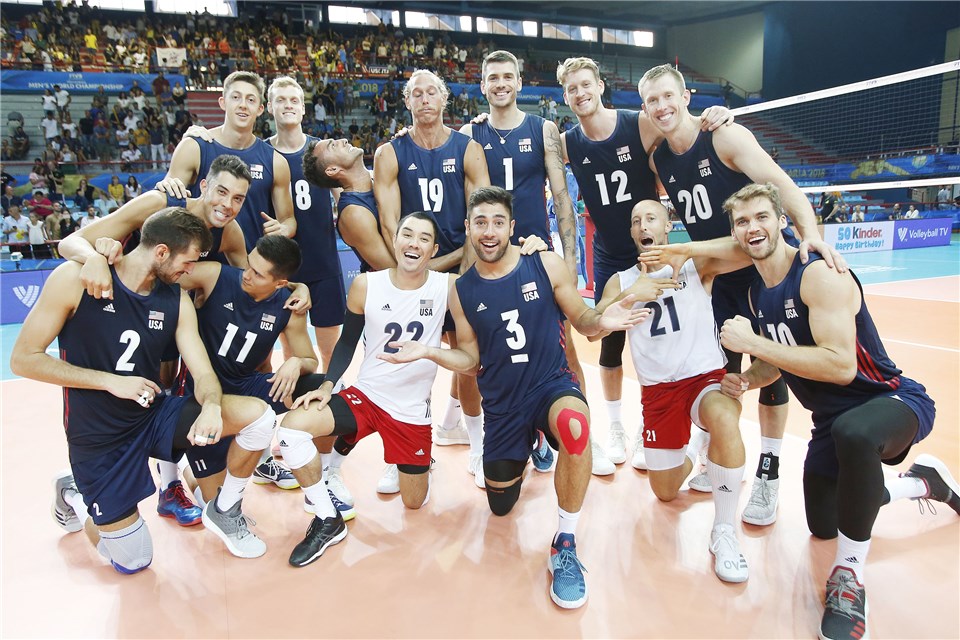 The Americans secured the Pool C title with its fifth-straight win on Tuesday, topping Tunisia via sweep. Serbia meanwhile edged out Russia in five sets to claim the second spot in the group.  Current Photo via FIVB

The Americans secured the Pool C title with its fifth-straight win on Tuesday, topping Tunisia via sweep. Serbia meanwhile edged out Russia in five sets to claim the second spot in the group.

The United States will now head to Sofia, Bulgaria to compete in Pool G with Iran, Canada and host Bulgaria. Serbia is set for Pool H play in Varna, Bulgaria, with Poland, France and Argentina.

Russia will head to Assago, Italy, for Pool E play with Italy, the Netherlands and Finland.

“There is a great satisfaction in our team since we ended as the first-ranked team in Pool C,” head coach John Speraw said. “This round was really difficult, but we caught a good start and kept our pace until the last match, while performing better and better. Even between sets, even though we won pretty handily, we would talk about ‘We could be a little bit better in transition or we could be a little bit better about how we are communicating some of those sets.'”

The Americans dealt a crushing blow with their serve, pounding Tunisia with 17 aces, while allowing just two. The United States also boasted a 38-20 lead in kills and 7-2 advantage in blocks to overcome 19 miscues, while earning just 13 points off Tunisian miscues.

Taylor Sander (13), Max Holt (12) and Aaron Russell (10) led Team USA with double-digit scoring efforts. Holt served up six aces, including four in the final stanza, while Sander added six perfect serves to a team-best nine kills. Russell tallied eight putaways, one block and one ace. Four other players added five or more points: Micah Christenson (7), David Smith (7), Matthew Anderson (6) and Benjamin Patch (5). Christenson served up three aces and notched a team-best two blocks, while Patch did all his scoring as a substitute in the final stanza with three kills, a block and an ace. David Mcdonnell and Jake Langlois also saw action as substitutes in the match.

Tunisia shifted its lineup in Set 2, but the result was the same with the Americans cruising to a 25-18 victory.

The Americans finished off the match with a crushing 25-13 win including four aces by Max Holt.

Opposite Aleksandar Atanasijevic and outside Uros Kovacevic led the way for Serbia with 23 and 21 points respectively. Atanasijevic downed 19 kills and added a team-best four aces, while Kovacevic chipped in 18 kills, two aces and a block. Marko Ivovic (16) and Srecko Lisinac (11) rounded out the double-digit scoring efforts. Ivovic starred in all facets of the game with 10 kills, a team-leading three blocks and three aces. Lisinac served up four aces to go with his seven putaways.

Russia boasted the early lead, but Serbia pulled within three at 16-13 and leveled the score at 17. In the end, Atanasijevic clinched the Serbian win with an ace.

Russia again grabbed the early advantage at 8-5, but held on this time, pushing ahead 16-11. After a late tie, Russia knotted the match at a set apiece at 26-24.

Butko was back on the court in Set 3 as a substitute alongside Yury Berezhko and Victor Poletaev, but it was not enough to hold off the 25-17 Serbian win.

Russia again found a counterpunch, capturing a 25-22 win to send the match to a decisive fifth set.