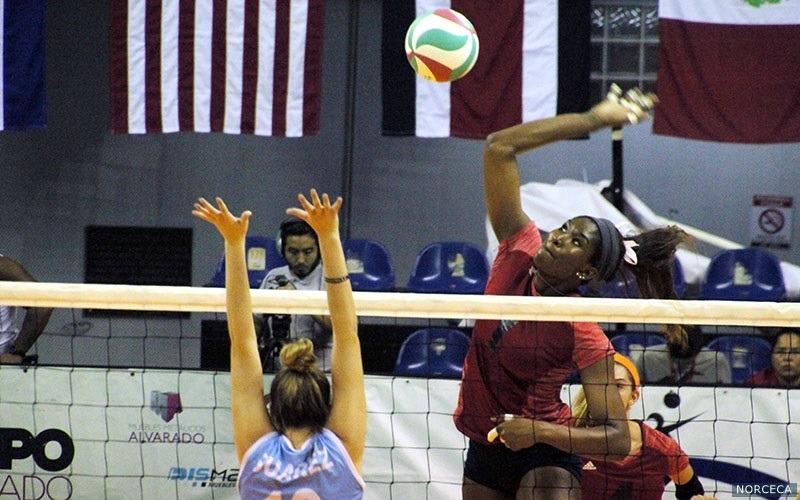 The U.S. Women's Junior National Training Team announced its 16-woman training roster as they prepare for the U20 World Championships in a month. Current Photo via USA Volleyball

With the U20 World Championships coming in a little over a month, USA Volleyball has announced the 16-athlete training roster for the U.S. Women’s Junior National Team. The roster features four middle blockers, two liberos, four outside hitters, three opposites and three setters.

The lone incoming freshman of the group is Brionne Butler, seen as the number two recruit in the nation. Butler will be attending the University of Texas in 2017. Regan Pittman of Minnesota didn’t play much as a freshman in 2016 on a stacked Golden Gopher front line, but was an Under Armour First Team All-American in 2015 and brings nice length at 6’5″. Speaking of height, Rachael Kramer brings more than enough at 6’8″. Kramer hit an astounding .537 as a freshman at Florida last season. Rounding out the quartet is Elle Sandbothe, a soon-to-be sophomore at Kansas State who made the Big 12 All-Freshman Team.

Tiffany Clark and Gabby Curry are the pair of liberos on the training roster. Clark spent her freshman season at Michigan, making her first career start toward seasons’ end. A few weeks back Clark announced her decision to transfer to Wisconsin, where she will be eligible to play in 2018. Curry meanwhile is the back-to-back Georgia Gatorade Player of the Year and will attend Kentucky this fall.

Greeting Curry at Kentucky will be Leah Edmond, who logged 450 kills as a freshman in 2016. She starts off the list at outside hitter and is joined by three others. Denise Ssozi, a rising sophomore at Air Force joins the training roster along with 2016 Under-Armour High School First Team All-American and incoming Florida commit Paige Hammons. Thayer Hall, the MVP of the 2017 U20 Pan American Cup for the U.S., headlines the list.

The three right sides/opposites for the WJNTT are Holly Carlton, Mikayla Shields and Ronika Stone. Carlton redshirted her first season at North Carolina in 2016. At 6’7″, she could provide a deadly front line of length with Rachel Kramer. Shields was 2016 SEC All-Freshman Team at South Carolina, while Ronika Stone earned 2016 Pac-12 All-Freshman Team honors at Oregon last season.

Completing the roster are the three setters: Franny Arnautou, Norene Iosia and MacKenzi Welsh. Arnautou was fifth in Ivy League matches as a freshman at Yale in assists per set (7.39). Iosia made 26 starts as a freshman at Hawaii in 2016. Welsh was AVCA All-America Honorable Mention as a freshman at Michigan last season.

“USA Volleyball is excited about the group of athletes who will comprise the 2017 U.S. Women’s Junior National Training Team,” USA Volleyball Senior Director of High Performance and Events Tom Pingel said in the release. “It’s a very athletic group that will undoubtedly make for some hard decisions for the coaching staff when naming the World Championship roster.”

The captain of the WJNTT ship and that coaching staff will be Texas A&M head coach Laurie Corbelli. She will be joined by Blake Rawlins and Tom Pingel on the coaching staff.

The U.S. Women’s Junior National Training Team will chisel down from 16 to 12 roster spots for the World Championship event from July 14-23 in Boca del Rio and Cordoba, Mexico. The U.S. used just 12 in the U20 Pan American Cup, with nine of those 12 making the 16-player training roster this time around. The seven that weren’t on that roster but made the WJNTT are Stone, Iosia, Arnatou, Curry, Kramer, Ssozi and Edmond. That U20 Pan American Cup was a successful ride for the U.S., as they won the event for the first time. They’ll try to match that success come July. Training will be held from July 2-12 with the 2017 FIVB Volleyball Women’s U20 World Championship lasting from July 14-23.