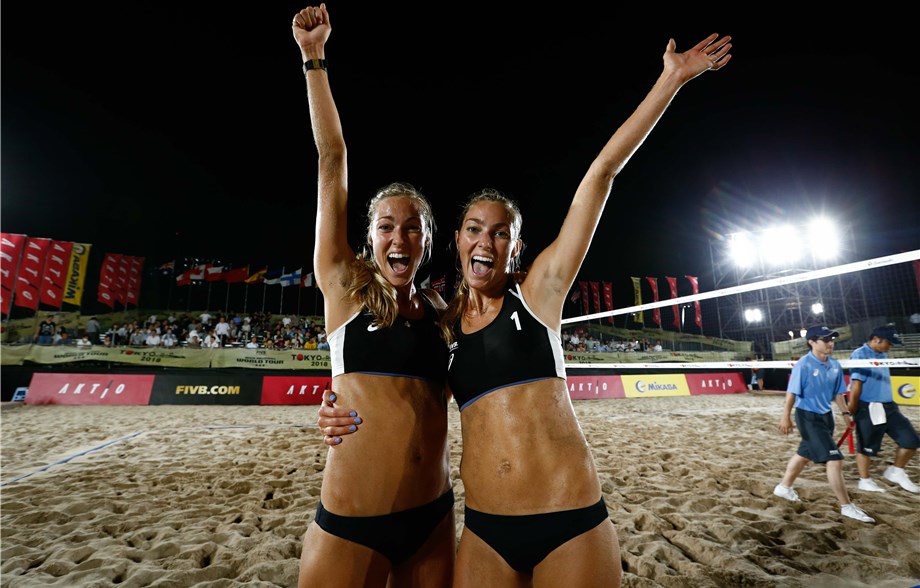 The Tokyo Three Star kicked off on Wednesday with the qualifying round, one women's match and seven men's duels. Two American pairs were among the eight teams, which earned spots in the main draw. Current Photo via FIVB

The Tokyo Three Star kicked off on Wednesday with the qualifying round, one women’s match and seven men’s duels.

In the lone women’s match, Americans McKenna Thibodeau/Madison Witt bested homestanding Satono Ishitsubo/Asami Shiba 21-17, 21-15 to claim the final spot in the main draw. This is just the pair’s third FIVB World Tour appearance, following a 25th place effort in Huntington Beach in May and a ninth place finish in Nantong, China in June.

“We are so excited to come out here and compete,” Thibodeau said. “We’ve never been to Japan and we truly enjoyed the people and the company. The win was just the cherry on top. We’re proud of ourselves for battling through the heat. Qualifying for the main draw is so exciting for us. We’re going to have to take every game seriously. Every team is going to be a great competition for us. So we’re going to keep learning and keep working hard out there and see where it can get us.”

On the men’s side, two Japanese pairs and teams from five other countries filled out the main draw with one qualifying win apiece.

Three of the qualifying matches went to tiebreak with France’s Romain Di Giantommaso/Jeremy Silvestre and Japan’s Yuya Ageba/Katsuhiro Shiratori and Juki Hatabe/Takashi Tsuchiya moving on. All three pairs won the opening set and held on for victory.

Pool play is set to begin at 8 p.m. ET Wednesday.

Joining Budinger/Rosenthal in the main draw are fellow Americans Casey Patterson/Stafford Slick, the No. 4 seed, and No. 10 Bill Kolinske/Miles Evans. Qatar’s Ahmed Tijan/Cherif Younousse are the top seed in the field.

Japan’s wildcard entry Megumi Murakami/Miki Ishii are the top seed. Fendrick/Sponcil check in at No. 4. Flint/Day, who are looking to win their fourth straight title following two AVP golds and the Haiyang Three Star title, are the No. 5 seed.