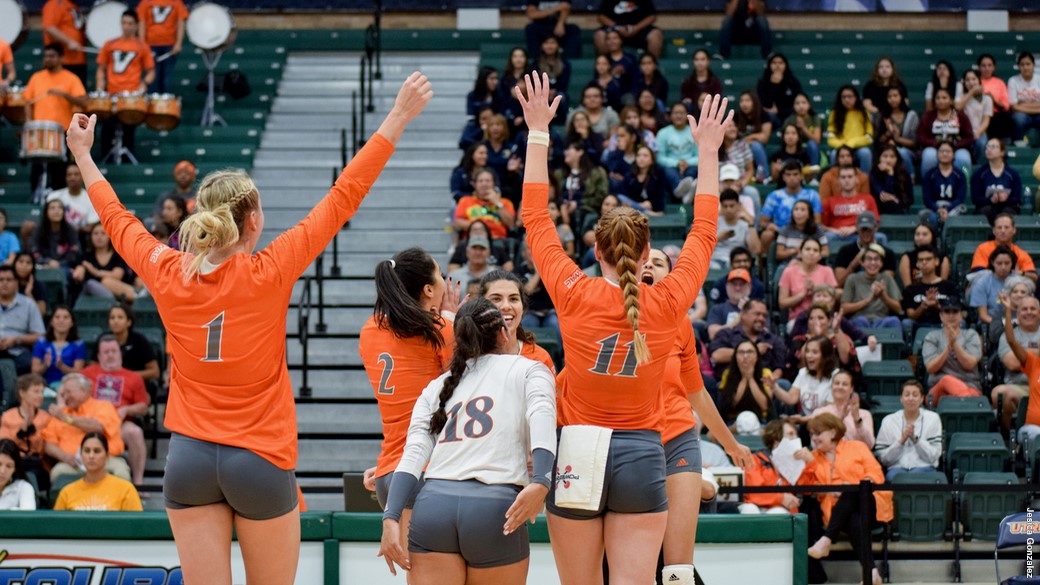 Utah Valley head coach Sam Atoa recorded his 400th career victory on Oct. 6 at Grand Canyon. Atoa, who is currently in his 20th season as Utah Valley’s head coach, boasts a 400-230 career record (.635). The 2016 WAC Coach of the Year holds a 262-199 (.568) mark during his 16 seasons of coaching Utah Valley at the NCAA Division I level, as well as a 138-31 (.775) clip during his four seasons of coaching the Wolverines during the school’s junior college era. He is Utah Valley’s winningest active coach in any sports, as well as the school’s winningest coach at the NCAA Division I level.

Utah Valley has played a total of 10 five-set matches this season. Nine of Utah Valley’s last 11 matches have also gone the full five sets. The Wolverines hold a 4-6 record in five-set contests.

UTRGV’S OLIVEIRA RANKS IN TOP 10 FOR BLOCK ASSISTS VS. GCU

UT Rio Grande Valley’s Talita Oliveira posted a career-high nine blocks vs. Grand Canyon on Sept. 27. Thursday. She had eight block assists, tying for the seventh-highest single-match total in program history. The nine total blocks were one shy of breaking into the top 10.

In her team’s match against Texas Tech on Sept. 14, UT Rio Grande Valley’s Ragni Steen Knudsen recorded her 1,000th career kill to become the ninth UTRGV player to do so. Knudsen now ranks sixth with 1,124 career kills, 51 away from fourth place, and currently holds the program record for kills per set (3.63).

Chicago State’s Megan Klavitter, who earlier this season became the only active player in the WAC with 1,000 or more digs on Sept. 8 at Georgia State,  posted a career-high 38 digs against Brown on Sept. 14. She leads the WAC in digs per set (5.69) and total digs (444). With 1,282 career digs, Klavitter needs 33 to break Chicago State’s Division I record as Mysta Townsell (2010-13) holds the Division I career digs record with 1,314.

In her team’s win over Texas A&M-Corpus Christi on Sept. 11, Alexandra Ecker broke the program record for total blocks when she finished the match with a pair of blocks to push her total to 343, surpassing the 341 of Haley Durham (2012-15). Ecker now has 369 total blocks. She also holds the program block assists record with 332.