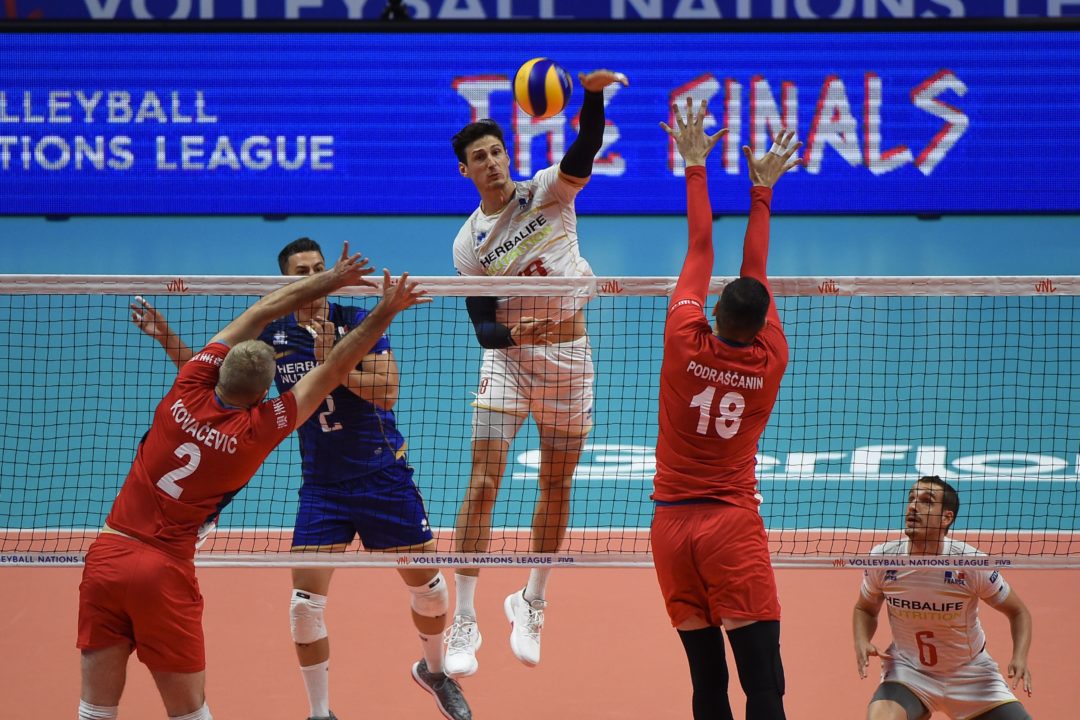 France's serve and attack sliced through Serbia as they join Russia as Pool winners on the day with the semifinals next. Archive Photo via FIVB

In the final match (which was played after the Pool B match below)  of Fina Six group play, France made quick work of Serbia to win Pool A. That sends France on to the semifinals while Serbia’s tournament comes to a close.

France’s was dominant in the serve and reception game, logging 10 aces while Serbia could not ace the French side even once. Beyond a 10 point swing, that also kept Serbia out of system more often, leading to a France edge in spikes (43-32), digs (16-10) and blocks (5-3).

Individually, Earvin Ngapeth (17 points), Thibault Rossard (13 points), Stephen Boyer (12 points) and Nicolas Le Goff (8 points) combined for 39 kills – seven more than Serbia as a whole – on just 54 attempts. Kevin Le Roux (6 points) even would have been second on Serbia in scoring behind his three kills, two aces and a block. In that regard, give credit to setter Benjamin Toniutti, who received great passing and found the open man to burn the Serbian defense.

For Serbia, they couldn’t find much rhythm together and 14 different players saw action with none appearing in more than two sets. Uros Kovacevic (10 points) still managed a strong outing in just the first two games with 10 kills on 17 attempts, but no one else recorded more than five points.

While Serbia’s Volleyball Nations League appearance ends in a top six finish, France looks to add to its final slot. They’ll get the United States in their semifinal match at home, while Brazil and Russia face off in the other semifinal.

In a match with both teams moving on to the semifinals regardless, Russia took down the U.S. Men’s National Team in straight sets. Although both will continue on, the Russian side wins Pool B and earns a more favorable semifinal match. For Team USA, it’s not the ideal semifinal match-up, but they did get some rest in this one to better prepare themselves for it.

Russia was just the stronger side in many different aspects of the match, totaling more spikes (46-39) and blocks (6-1) on one less team error and the same amount of aces (4-4). The three-set sweep doesn’t indicate how close the match truly was, with every game ending in a three or four point deficit – although Russia was in control at the end throughout.

Maxim Mikhaylov (16 points) was one of three Russians in double-figures for scoring along with Dmitry Volkov (11 points) and Egor Kliuka (11 points). Everyone who played pitched in something for Russia though, and the entire team logged 46 kills on 89 attempts. That spread-out, balanced attack was facilitated by setter Dmitry Kovalev, who got strong passing that led to him finding the open target that quelled the USA block and led to the Russian win.

For the Americans they seemingly were more concerned with resting up and easing some injuries, as all of their three double-digit scorers from their win against Poland did not play against Russia – Matthew Anderson and Ben Patch seemed to be coaches decisions while Taylor Sander was coming off an injury yesterday. Aaron Russell (14 points), Kyle Ensing (11 points) and Jeff Jendryk (10 points) did their best in filling in and put together 32 kills on 69 attempts, but taking away the top options lessened the depth of the team. After those top three, the rest of the Americans had just seven kills on 29 tries.

At the end of the day, the result doesn’t effect who advances on to the semifinals, with Russia and the United States both moving on. The difference is that as Pool B victors, Russia faces on the Pool A runner-ups while the U.S. have to play the Pool A winners. That actually turns out to be a big deal, considering that France – the host nation and top team through the tournament – is that team for the U.S. to play while the Russians get top-ranked but non-fully healthy Brazil.

Maxim Mikhailov (Russia opposite): “We feel good because we won two games. It’s very important, but even more important will be tomorrow. It doesn’t matter who we will face; it will be a big game. I love volleyball and Russia; it’s always been an honor to wear the jersey of the national team.”

Kyle Ensing (USA opposite): “I think we’re a deep squad. We’ve been attacking really well, touching a lot of balls at the block but they came up on top.”