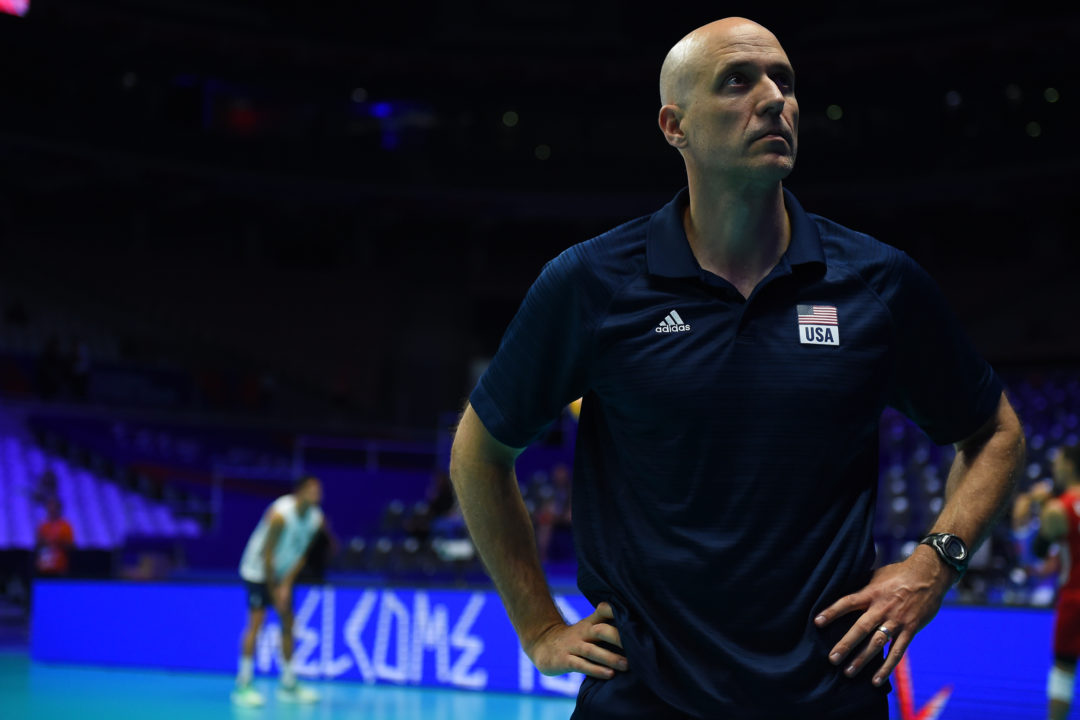 U.S. men's coach John Speraw had to make several adjustments at this year's Volleyball Nations League, and while it didn't result in victory, it seems they've hit their best combination late against France. Archive Photo via FIVB

The story of the United States volleyball program, both men and women, at the 2018 Nations League has been ‘adjustments.’ Both teams have found themselves playing not well at times, and via adjustments have either made big comebacks, or very-nearly made big comebacks and come up short.

That story carried through to the semi-finals of the men’s tournament, where the U.S. went down 0-2 against defending champions France, before coming back and winning the next two matches, eventually losing the tie-breaking 5th and the match 3-2.

Even with an injury to Thomas Jaeschke, it looked as though the Americans had found a winning formula at the hitter positions that included the versatile Matt Anderson shifting back to his preferred outside hitter, pairing him with Taylor Sander in his return from new-found fatherhood as a replacement for Jaeschke, and handing the opposite position to the long, tall, uber-athletic Ben Patch.

While Patch did fairly well in the narrow window of hitting going 4/6 in almost 2 sets, and that was enough for him against Poland, the other parts of his game weren’t enough against a powerful team like France. His passing isn’t to par, and his serving is an anchor – in 13 service attempts in the Final 6, he’s had 8 errors and no aces. That rates him as the least-effective server in the field. It’s not just about the points given up on error, but it’s as much about the momentum and the emotional drag

He also at times made questionable choices in the block, which against France’s creative and indomitable hitters will be preyed upon every time.

Then the Americans made the switch, moved Anderson back to opposite, and brought on Aaron Russell at outside hitter, and that shifted the whole momentum of the match. In 3+ sets played, Russell hit 10/19, had 3 blocks, and 2 aces. While he wasn’t perfect, and still had a few more errors than American fans would have liked, he had the most success of the hitters at trying to slow down Boyer, who came away with 31 points, and he added aces to the errors.

Now the Americans will have a bronze medal match against Russia to test out the roster they finished with, and see if they can validate it ahead of the more-important World Championships that begin in September. It’s not time to give up on Patch – his upside is too good to not keep trying him and keep pushing him in big moments – but he still has time to develop while playing professionally in Italy, the best league in the world, with Vibo Valentina.

For Worlds, the path is clear: go with the experience, go with the reliable, and go for gold.

Im not sure Anderson prefers the opposite spot, I think he likes OH and when patch is up to stuff (he’s getting there quickly and playing well!!!) Anderson at OH would be insane again.

Russell is a much better player than Patch. In Russell inaugural year after Penn State he was awesome, in his first year as a professional he was good. Patch didn’t have a great year at Vibo and his inaugural after University wasn’t great, by comparison Ensing and De Falco who both still have a year left at Long Beach both played awesome in this tournament. Yes Patch is a better athlete as he can jump through the roof but only time will tell if he is a better player and so far he hasn’t played to his potential.