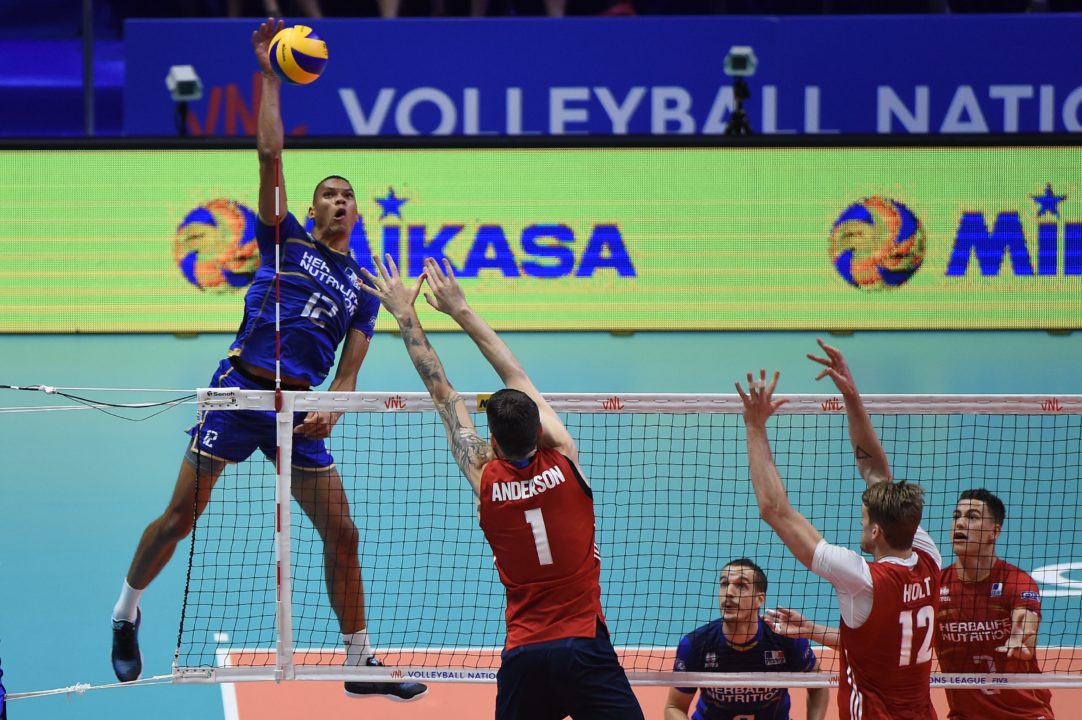 Stephen Boyer's 31 point outburst led France past the United States despite a comeback effort from the Americans. Archive Photo via FIVB

After earning the top record in the preliminary stage and going 2-0 in Final Six pool play, France looked to continue their dominance at home with a spot in the championship on the line. They did so early, leading 2-0 in sets on a 50-35 point difference, but the U.S. Men’s National Team showed plenty of fight in winning two tight games and rallying back to force a fifth. Eventually though, France squeaked one out as they will play for Gold and the United States for Bronze.

A big reason why France came out on top was Stephen Boyer (31 points), who totaled 25 kills on just 38 attempts to go with three blocks and aces. The United States did well in defending Earvin Ngapeth (12 points) in that they held him to 11 kills on 35 tries. That emphasis on him hurt in defending the rest of the French side though, with Kevin Le Roux, Nicolas Le Goff and Thibault Rossard all reaching nine points as the trio along with everyone else posted 25 kills on just 38 attempts. Setter Benjamin Toniutti (3 points) facilitated the attack.

It was difficult for the United States to keep up with the efficiency of all those players plus Boyer, but they came close to winning despite those numbers. Setter Micah Christenson (2 points) had some highlight plays in the match and kept things moving. He made plenty of connections with Matthew Anderson (23 points) and Taylor Sander (20 points), who combined for 40 kills on 65 attempts after earning an off-day yesterday. Aaron Russell (15 points) was also a game changer after coming on as a sub in the second and a starter in the final three when things turned around. Maxwell Holt (11 points) also pitched in, but David Smith‘s (4 kills on 12 attempts) struggles and Ben Patch (4 kills on 6 tries) appearing in just the first two sets and being pulled – likely for defense – hurt the team.

Although the rally came up short, Team USA never ceased being aggressive. They totaled more spikes (68-61) and only had one less block, but the downside was the pressure from France and their home crowd led to 15 more team errors and almost double the amount (32-17). France also posted more aces (8-4) and digs (36-25).

This all leaves just one match to play for both sides now. For France, they will try for first place and Gold in the inaugural FIVB Men’s Volleyball Nations League as they go for another top class trophy following the 2017 World League. For the Americans, they head to the Bronze medal match where they can still end with a top three finish.

Laurent Tillie (France head coach): “I think among all our qualities – physical, technical, mental – the one that made us win tonight is the mental. After losing the fourth set, you can tend to fall apart, but my players remained mentally strong through to the end. Obviously the crowd helped us out as well. The Americans changed their lineup after two sets, adapting to our volleyball. It was hard for us to control them then, but with an incredible Boyer and the ‘French feeling’, we got the win.”

Benjamin Toniutti (France captain): “We know we scared everybody! It was quite tough, but above all we’re satisfied with the result. During the first two sets, we played amazingly well, and then with them changing the lineup, they passed the ball better and played really well, using pipes a lot. But eventually we won 3-2 after leading 2-0. The crowd was huge; we even want more tomorrow. It’s going to be a first final for us on the French ground; let’s make history.”

John Speraw (USA head coach): “We got better as the match progressed, and obviously we have some great flexibility with the players that we have, and Matt [Anderson] did a great job. These matches help us learn a lot about our guys. We’ll just have to go back and evaluate and keep getting better. I’m looking forward to train now. The hardest thing with the VNL is that you get so little practice time. That’s frustrating, so we’ll get in the gym with the guys now in order to try and be better.”

Erik Shoji (USA libero): “That was a great game. France is a great team. We have several good matches against them. We came out a little flat while they were on fire. But then in the third and fourth we got better at each and every point. Eventually they came up two points ahead in the fifth. Now we’re really focused on the bronze medal tomorrow.”