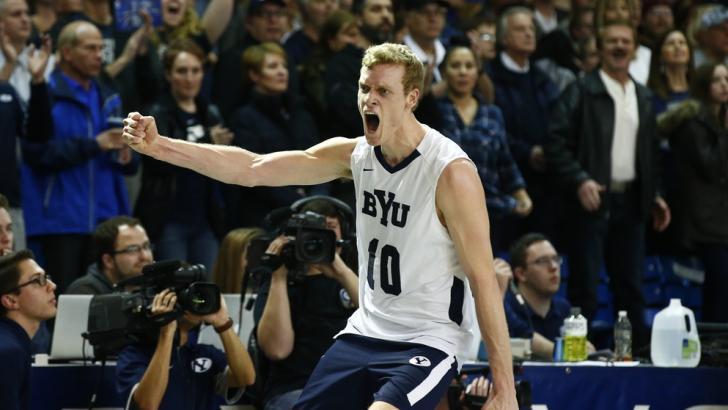 After helping lead #3 BYU to a pair of three set sweeps over #4 Hawaii, Jake Langlois has been named... Current Photo via BYU Photo/Jaren Wilkey

After helping lead #3 BYU to a pair of three set sweeps over #4 Hawaii, Jake Langlois has been named this weeks VolleyMob National Player of the Week.

In the team’s first match to the Warriors, Langlois slammed down 13 kills on a .450 hitting percentage. He also contributed two service aces, five digs and three blocks – one being a solo block. In the second match, Langlois added another 12 kills to his tally on a .346 hitting percentage, along with one ace, two digs and six block assists.

On the week, Langlois averaged 4.17 kills per set on a .391 hitting percentage.

The senior out of San Jose, California didn’t begin playing volleyball until he began his collegiate career with BYU. This season, Langlois has put down double-digit kills in all but one match that he participated in, amounting to a total of 245 kills hitting for .337 for an average of 3.97 kills per set. He has also recorded 33 aces and 39 blocks on the year, in addition to 86 digs.