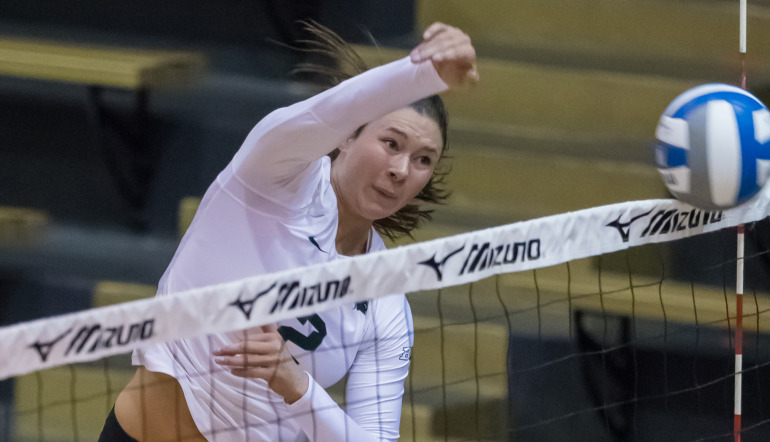 When a player has a great all around weekend and helps her team to historic upsets of a pair of... Current Photo via Michigan State Athletics

When a player has a great all around weekend and helps her team to historic upsets of a pair of Top 5 teams, it seems like a no-brainer that she would be the National Player of the Week.

Michigan State outside hitter Autumn Bailey did just that, but making the decision wasn’t as easy as one might think as several players turned up the volume on their performances in conference openers. You’ll see several of them on our honorable mention and other notables lists below.

But first, let’s talk about Bailey, our VolleyMob National Player of the Week for week 5. The redshirt senior notched 4.75 digs and 3.75 kills per set to lift the Spartans to road wins over No. 3 Minnesota and No. 5 Wisconsin. The Georgetown, Ontario, native posted double-doubles in both upsets, notching 16 kills and a career-best and match-high 25 digs against Wisconsin and following that with at 14-kill, 13-dig effort vs. Minnesota. For her efforts, she also was named Big Ten Defensive Player of the Week.

And now to our honorable mention list. It was hard paring it down this week with strong offensive, defensive and setting efforts across the country.

7.38 digs per set; Missouri Valley Defensive Player of the Week; tallied 36 digs against Missouri State on Friday; registered 23 digs in a sweep of Southern Illinois Saturday; currently leads the Valley in total digs (356) and digs per set (6.36), while ranking second nationally.

6.26 dps; SEC Defensive Player of the Week; 26 digs vs. Ole Miss with two aces and perfect 24-for-24 effort on serve receive; notched 18 digs and an ace and went 12-for-12 in serve reception agaisnt Georgia; helped Auburn limit opponents to .137 hitting effort