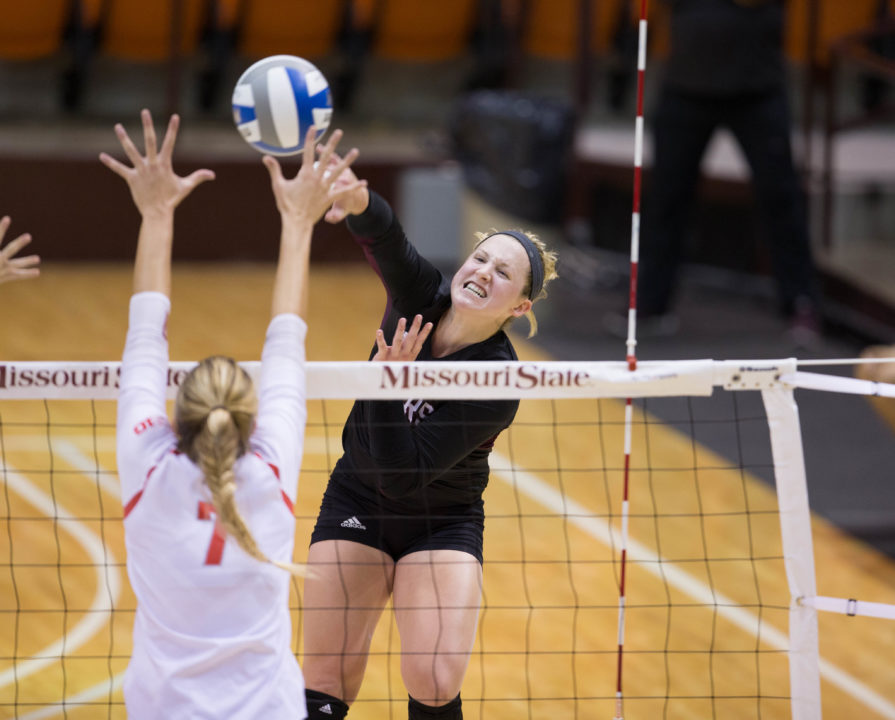 Missouri State's Lily Johnson had an all-around amazing weekend for her team, racking up 4.45 kills per set and 4.45 digs per set. Current Photo via Missouri State Athletics

Missouri State’s Lily Johnson had an all-around amazing weekend for her team, racking up 4.45 kills per set and 4.45 digs per set at the Pepperdine Asics Classic, earning this week’s VolleyMob Player of the Week honor.

Johnson, who also was dubbed Missouri Valley Player of the Week for her accomplishments, posted two double-doubles, including a 15-kill, 18-dig effort to go with a team-leading four aces in a four-set battle with No. 8 Washington. Against the host Waves, the senior outside hitter also turned in a double-double with 26 kills and 17 digs.

The Wildwood, Missouri, native garnered her record-tying 10th MVC Player of the Week honor on Monday and is blazing a trail toward the top of the Missouri State and Missouri Valley record books in kills. The three-time AVCA Honorable Mention All-American has guided the Bears to a 6-3 mark, including a win over ranked foe Ohio State and four-set losses to Kansas and Washington.

There were several other standout performances this week, so here is a look at some of the other strong candidates for Player of the Week in our Honorable Mention and other notables below.

Taylor Leath (North Carolina)
The redshirt junior outside hitter averaged 6.14 kills and 2.57 digs per set, while hitting at a .360 clip at the Carolina Classic. Leath set a school four-set kills record with 27 against LSU, the highest kill tally by a UNC player since 2005, while rounding out a double-double with 12 digs. Leath was named ACC Player of the Week for her efforts.

Pilar Victoria (Arkansas)
The redshirt senior outside hitter garnered SEC Offensive Player of the Week nods after averaging 6.00 kills and 3.19 digs per set at the UCSB Thunderdome Classic. Victoria, who leads the nation in points and kills per set, posted a 16-kills, 12 dig double double against Yale, racked up 29 kills and 15 digs in a five-set loss to USC and added a 32-kill, 12-dig effort against UCSB.

Jaali Winters (Creighton)
The junior outside hitter averaged 4.30 points, 3.60 kills, 2.50 digs, 0.50 aces and 0.40 blocks per set while hitting .287 to lead Creighton to the Kansas Invitational title. The Ankeny, Iowa, earned MVP honors after posting a pair of double-doubles against ranked teams: with a 13-kill, 10-dig effort with a career-best four aces against Purdue and a 14-kill, 12-dig effort against Kansas.

Madison Rigdon (Kansas)
The senior outside hitter had a big weekend for the Jayhawks, surpassing the 1,000 kill milestone (1,023), and notching three double-doubles. Rigdon averaged 4.08 kills per set, while hitting at a .342 clip en route to Kansas Invitational All-Tournament Team honors and Big 12 Offensive Player of the Week nods. The Pflugerville, Texas, native helped the team to a 9-1 mark, including a win over No. 19 Purdue.

The freshman libero racked up an eye-popping 7.43 digs per set in two matches vs. Notre Dame over the weekend. The rookie managed a school four-set record 38 digs against the Irish on Sunday, en route to Big Ten Co-Freshman of the Week accolades.