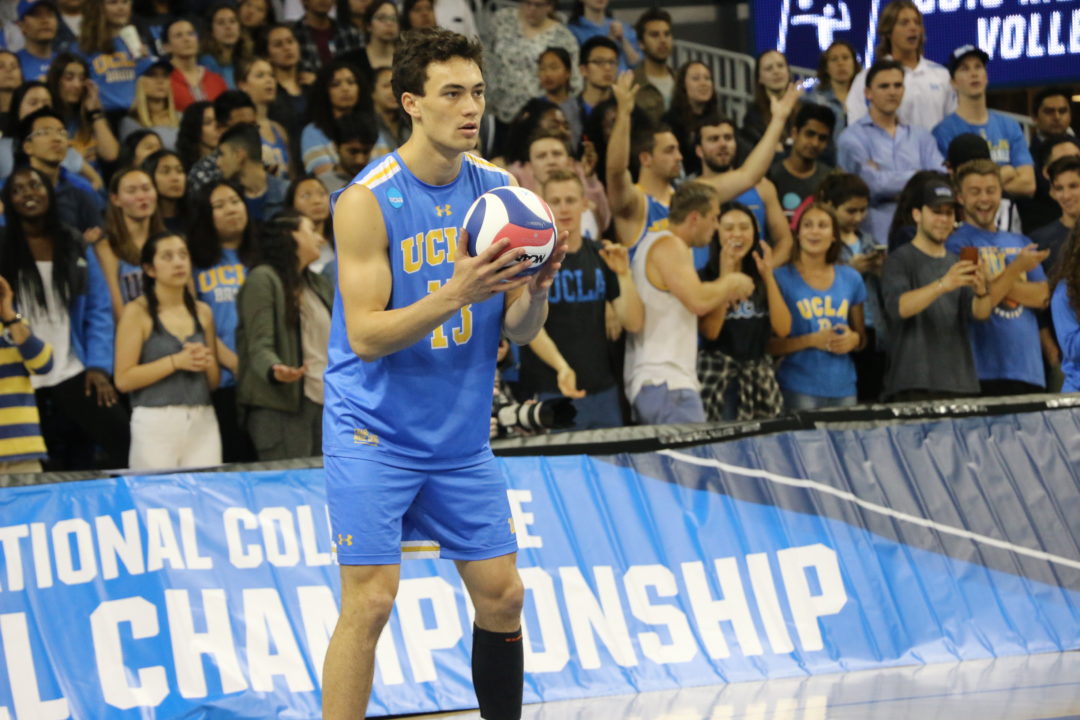 “It wasn’t a perfect match, but the guys played incredibly hard.” Those were the opening words of UCLA men’s volleyball... Current

“It wasn’t a perfect match, but the guys played incredibly hard.”

Those were the opening words of UCLA men’s volleyball head coach John Speraw after his team’s 3-1 upset of BYU in Thursday’s semi-finals of the 2018 NCAA Men’s Volleyball Championship.

“They played with such great enthusiasm,” he continued. “[Legendary UCLA men’s basketball] Coach Wooden would be proud. So we are thrilled. We are going to be playing for a national title. I can hardly believe it. We get to do it in our own house against a great team. It’s a great opportunity for us. It’s been a goal for us to get this far all year. Although truthfully we don’t talk about it all that much. We just talk about getting better each and every day and I think we’ve done a great job of that and I think we are seeing some results of our efforts. Overall it was just an outstanding effort by our team.”

In other post-match comments, UCLA All-American setter Micah Ma’a said that a run of second-touch dumps in the match, he had 6 kills total on 8 attempts, weren’t in the game plan. None-the-less, Ma’a, who ranks 4th in the nation with 10.56 assists/set this season, had 87 kills this season – a huge total for a setter. He’s probably the most offensive-minded setter in the nation, given that he came to UCLA as a 6’3″ opposite, including 256 kills as a freshman.

“I had no idea I was going to do any of those (referring to several two-handed dump putaways he had),” Ma’a confessed after the match. “It’s just
kind of circumstantial. The ball gets up there and I react. I got lucky tonight on a couple. But it’s just kind of how the game played out. When it gets tight like that sometimes I can give it to other guys and sometimes I just randomly put it down myself. Sometimes it works and sometimes it doesn’t. Tonight it worked which is nice.”