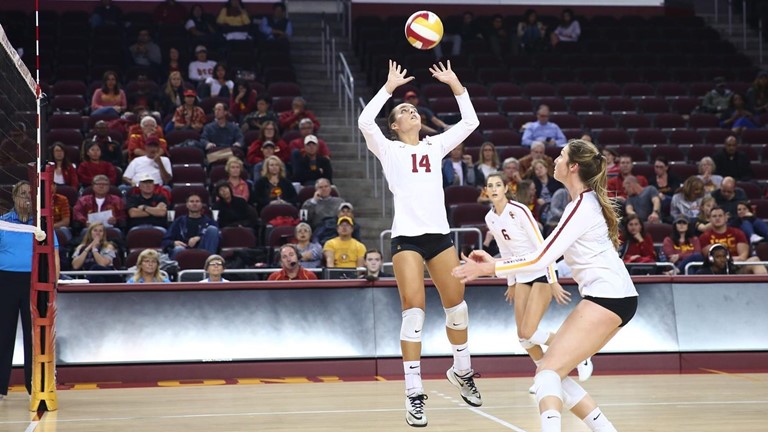 No. 12 USC has two Top 25 matches on tap for Week 14, with second place in the Pac-12 on the line. Meanwhile, No. 1 Penn State faces No. 7 Minnesota and No. 18 Wisconsin with the Big Ten title up for grabs. Archive Photo via USC Athletics

The final week of the regular season is not at a shortage for big matches, especially in the Big Ten, where the league title is still up for grabs and in the Pac-12 where teams are jockeying for positioning behind conference champ No. 3 Stanford.

There are 41 matches on the slate involving VolleyMob Top 25 teams or those receiving votes with the potential for a few more depending on results in both the Big East and Missouri Valley Tournaments, which feature No. 13 Creighton and No. 25 Missouri State and vote-getter Northern Iowa.

Of those 41, eight are head to head meetings between Top 25 teams and another three include a ranked team and a vote getter or two votegetters. Two matches feature a pair of Top 10 squads.

Wednesday’s slate brings four key matchups, including three in the Pac-12. No. 19 UCLA heads to votegetter Oregon State, No. 12 USC is set to face No. 22 Oregon and No. 16 Utah takes on No. 3 Stanford. In the Big Ten, No. 17 Purdue has its chance for payback against vote getter Michigan in Match 2 of a rare back-t0-back series.

Purdue wraps up its regular season against No. 11 Michigan State on Friday. No. 1 Penn State plays the first of two head-to-head Top 25 matches with huge title race implications, hitting the road to face No. 18 Wisconsin.

Also on Friday’s schedule are two more Pac-12 duels with No. 22 Oregon facing rival Oregon State and No. 16 Utah battling No. 21 Colorado.

The top-ranked Nittany Lions wrap up the week at No. 7 Minnesota on Saturday, while No. 4 Texas closes out the Big 12 slate at No. 9 Baylor. A Pac-12 showdown in Los Angeles finishes the regular season Top 25 schedule as No. 19 UCLA heads to No. 12 USC.