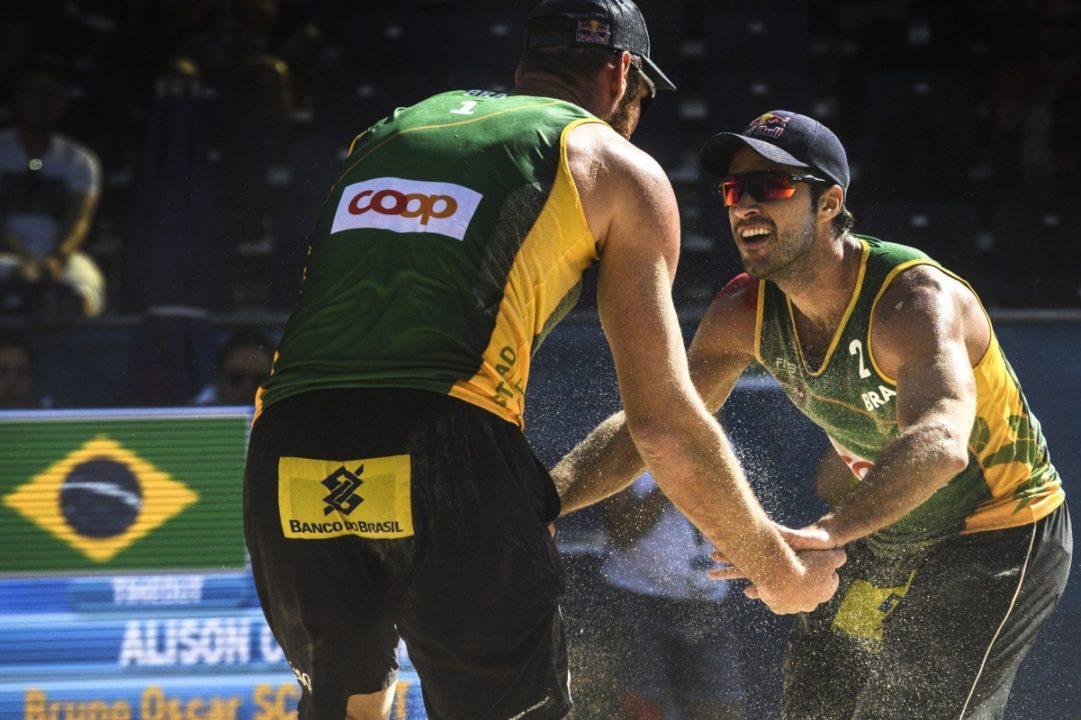 Alison/Bruno Schmidt lost in the round of 16 in each of their last two FIVB World Tour tournaments. Archive Photo via FIVB

When the 2017 FIVB Beach Volleyball World Championships begin on Friday in Vienna, Austria, the only team defending a tournament medal will be Brazililan pair Alison/Bruno Schmidt. The pair won the event in the Netherlands in 2015, and are the only medalists from that tournament to return.

That means the pair, who have had a dominant two-year run that includes Olympic Gold and FIVB World Major Series Finale gold last year, will have a chance to become the only men’s pair to defend a title.

Brazil has won the men’s event 6 times in its 10 years history, but that has never been on repeat of any pair/ In fact, the only player to ever win more than one title is Alison Cerutti – who won in 2015 with Emanuel Rego and again in 2015 with Bruno Schmidt.

Oscar and Bruno Schmidt took 42 points in the 3rd set to beat Reinder Nummerdor and Christiaan Varenhorst in 2015, and while they’re still the favorites in the tournament, they aren’t the top seed. In fact, they’re seeded only 5th – behind, among others, two other Brazilian pairs (the top seeds are their countrymates Alvaro Filho/Saymon).

The pair have won just 1 of their 6 FIVB starts in 2017 – which was the Rio Open 4-star event in May. Last year, they had 4 wins in 9 starts, and so are well behind that pace this season – holding an average placing of 5.3 in their tournaments, as compared to an average finish of 2.8 last season.

Their last results have been their hardest – the pair limp into the tournament with a pair of losses in the round of 16, one against Alvaro Filho/Saymon, the top seeds, and the other against Oleg Soyanosky/Artem Yarzutkin, who are just the 14th seeds.

Below, see highlights of the two and get excited for their run to history.