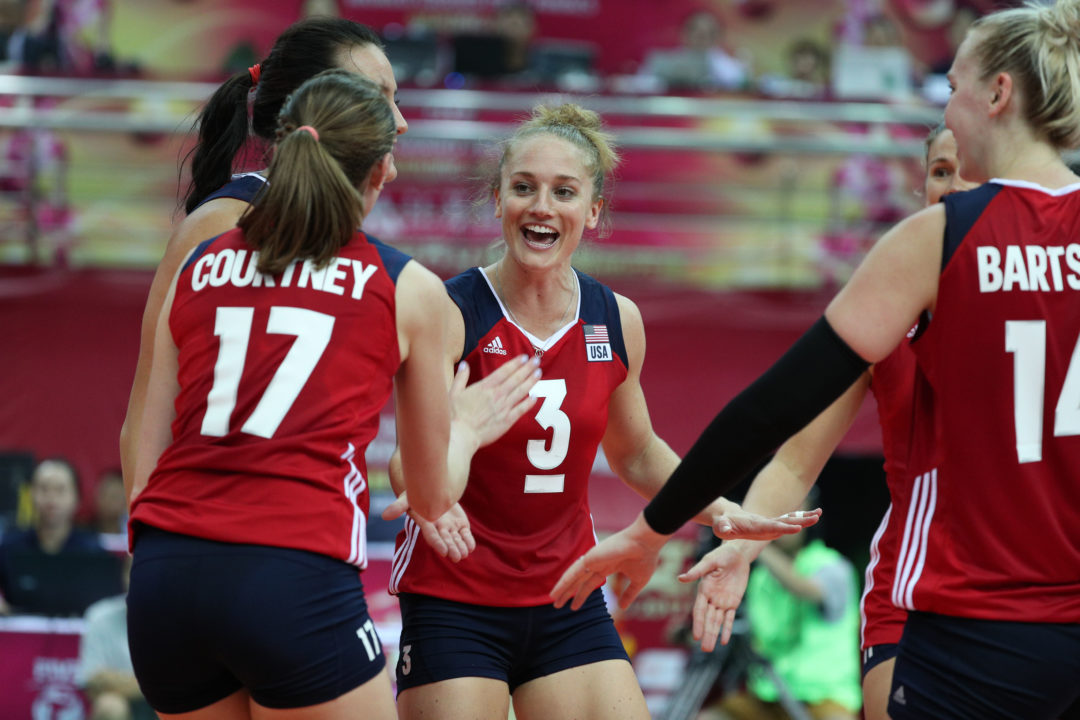 Team USA will face a loaded slate in Pool 14 of the Women's Volleyball Nations League with Brazil, Russia and hosts-China. Archive Photo via FIVB

Pool 14 might be the most loaded pool that the 2018 FIVB Women’s Volleyball Nations League will see. That is because it features an incredible four teams in the top five of the FIVB World Rankings. China was the 2016 Olympic gold medalist while Brazil won the 2017 and 2016 FIVB World Grand Prix. Team USA was the last non-Brazilian team to win that event, doing so in 2015. Meanwhile, Russia was the runner-up that year and earned a fourth-place finish in 2016. This is volleyball royalty at its best all coming together in one pool.

Going with the theme of this being a loaded group, it would only be right that each team is performing well through nine matches. So far, all four nations sit in the top seven, and three of the teams would make the cut to the next round. The one that would not is actually Russia, because China will be hosting the event. Still, it wouldn’t take much for Russia to move into the picture.

In total, the quartet combines for a 27-9 record. Leading the way though in the pool is the United States and Brazil, who both sit at 8-1 and atop the overall table. Not only will this pool create some separation between the two, but it’s an opportunity to fend off Russia below them. That same opportunity provides Russia a chance to move up the table, but there is a good chance that no one goes 3-0 in this pool.

It wouldn’t be much of a surprise for any team to win this pool, because all have been strong through this event. The team who has the worst record, China, is hosting the pool and is working on their second week back with star Zhu Ting. Russia has been solid overall at 6-3 and of course it wouldn’t be shocking for Team USA or Brazil to own the best record in the pool. That should make for a crazy fight to the finish where a 3-0 record might be just a dream.

Obviously, the importance of records in the pool is just another piece of what really matters – the overall table standings. Brazil and the United States can clinch a spot in the next round – which seems to be a foregone conclusion anyway – with a solid week, while Russia can either jump up the standings or stick in their position to make a final pool push next week.

The highlight match will be between the United States and Brazil, which pits the balanced and efficient attack and floor defense of Team USA against the power and winning experience of the South American side. It also features two of the strongest servers in Jordan Larson for USA and Tandara Caixeta for Brazil. Maybe most intriguing will be seeing the offense for the Americans against the killer-block of the Brazilians.

All of those things should come into play in matches with the others too, as even the winner of USA-Brazil could fall against the tough Russian side or in a road match with the top team in the world, China. The Asian side will have home court advantage and are working in Zhu for another week. With a spot already secured to the postseason, they could really throw a wrench in the other three teams chances of advancing on – although Russia is in a lot more danger of missing out than the other two. Knowing that, Russia is a little desperate and needs at least one win this week to set up a strong finale, or preferably two victories. That won’t come easy, but they have gone 2-1 in each of their first three weeks.