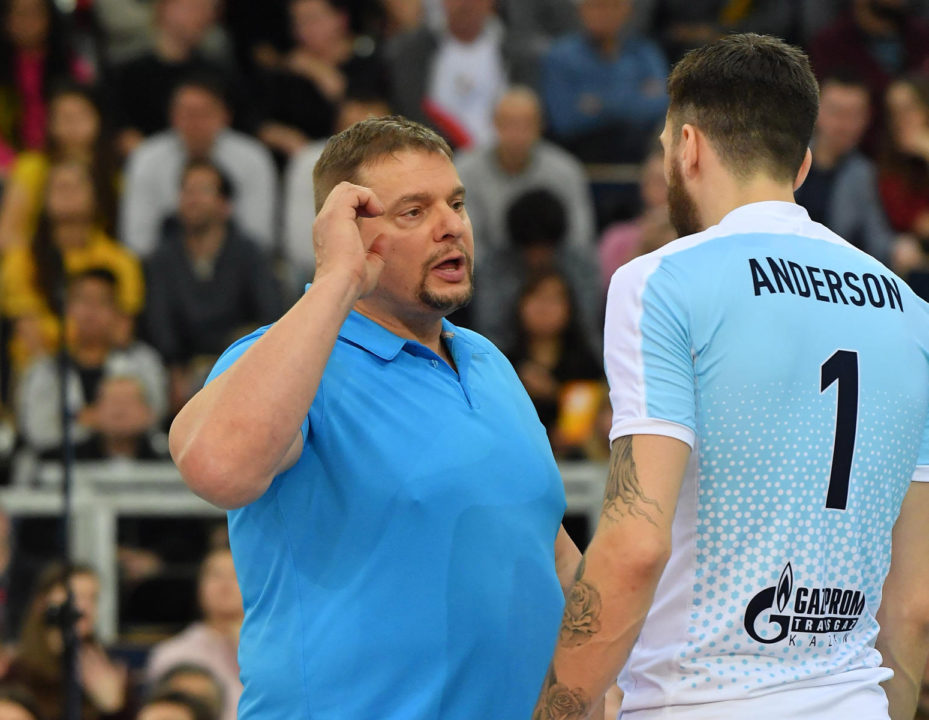 Coach Vladimir Alekno said Zenit Kazan and Spacer’s Toulouse VB are teams of a different level and there was no great benefit for Zenit (to play) in such a match. Current Photo via FIVB

There is no question that Zenit Kazan coach Vladimir Alekno was not impressed with his team’s Feb. 28 Champions League group stage opponent, Toulouse.

““With all due respect to the opponent, Zenit Kazan and Spacer’s Toulouse VB are teams of a different level,” Alekno said. “It is safe to safe to say that the current Toulouse team is not at Zenit’s level. Unfortunately there is no great benefit for Zenit in such matches. In terms of preparing for the playoffs, the Saturday match against Zenit from St. Petersburg will be more useful. They have a strong squad, good players.”

Lowering Toulouse’s level was the fact that opposite Bram Van den Dries is out with injury and two other players, both Canadian citizens, were unable to get visas in time to travel to Russia for the match.

Toulouse head coach Stephane Sapinart explained the team’s predicament and was pleased with what his team was able to do.

“For sure, it was a really difficult game for us, and one could have expected it,” Sapinart said. “I think my team did what it could do tonight, but I think we offered a good fight against a very strong team. Not the whole roster came to Kazan. As a result, we had only ten players and we were really missing these extra two on the court.”

As for Zenit’s match with St. Petersburg on March 3, that also came via sweep although the sets were much closer at 25-15, 25-21 and 25-22. Remaining on the team’s schedule are a pair of Russian championship matches against Novokuibyshevsk on March 10 and 16.

Alekno has been at the helm of Zenit since July 2008 and also has coached with the Russian national team since 2010.

Alekno and his players are always throwing out these kind of quotes…since they are so dominant, they seem to be getting a lot of passes…but it must drive their opponents crazy

Just use it as an opportunity to get your bench players some game time and get on with it. Also, the Canadians on Toulouse are Ryan Nickifor and Danny Demyanenko. Both rookies to pro ball