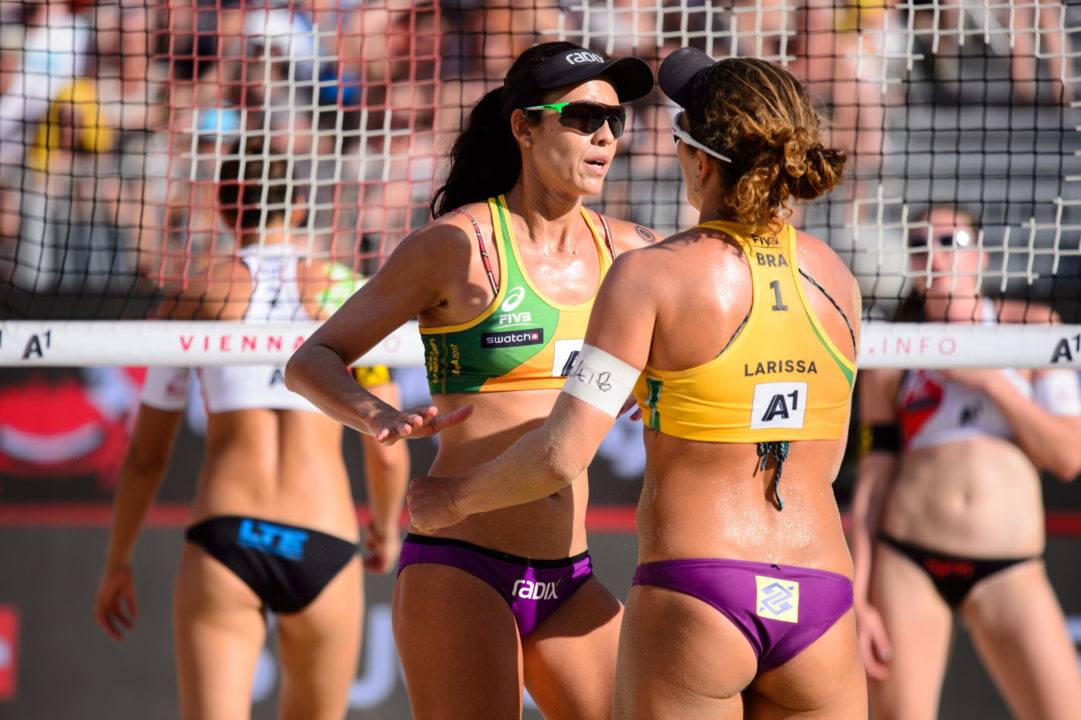 Franca/Antunes are expected to go deep into the tournament, but their day one competition shows how difficult their journey will be to the podium. The detriment for the Austrian duo was their 14 errors in the match to the Brazilian’s three. Holzer blocked seven attacks, while Antunes was only able to stop four. Franca played a huge offensive role in the win with 24 kills, while the Austrian side kept things even with Holzer having 14 kills and Strauss putting down 12. Though their overall stats weren’t far off, the errors made by Austria cost them the match over the top-seed.

Two American duos competed on day two of the competition, with Nicole Branagh and first-time partner, Emily Day, winning their match over Germany’s Isabel Schneider/Victoria Bieneck 2-0, (21-16, 26-24).  Branagh used a tough jump top-spin serve to throw off the German side, though it was hot and cold. In the first set, Branagh had three aces, while collecting just one in the second.

This was the first match for Branagh/Day, as Kerri Walsh Jennings had to pull out at the last second due to an injury suffered in Poland last week. Day who missed qualifying for the Beach World Championships with partner Brittany Hochevar was going to be in Vienna anyway for a wedding and was more than happy to compete with Branagh, according to the FIVB.

Kelly Claes/Sara Hughes defeated Rwanda’s Charlotte Nzayisenga/Denise Mutatsimpundu 2-0, (21-10, 21-11). Claes/Hughes used strong attacks and blocks to take down the Rwandans. The American’s were fairly even on their attacks, with Hughes putting down 12 kills while Claes added another 10. At the net, Claes stuffed down six blocks to zero for the Rwandans.

The #3-seeded Agatha Bednarczuk/Eduarda ‘Duda’ Santos Lisboa took down Kenya’s Gaudencia Makokha/Naomie Too 2-0, (21-7, 21-8). The Brazilian side used 27 attacks to defeat the Kenyan’s who put down just 12 kills. 10 Kenyan errors also helped the Brazilian side to the victory.

#2 ranked Chantal Laboureur/Julia Sude continued their dominance on the sand with a strong 2-0 win over Colombia’s Galindo Andrea/Galinda Gorda Claudia. A strong attack output secured the win for the German’s, having 32-18 kills in the match.

2016 Olympic Champions, Kira Walkenhorst/Laura Ludwig of Germany took three sets to take down fellow countrywomen, Julia Grossner/Nadja Glenzke. The win for the German side keeps their record at 2-0, as they took down Morocco’s Mahassine Siad/Imane Zeroual in a strong two-set victory on day one. 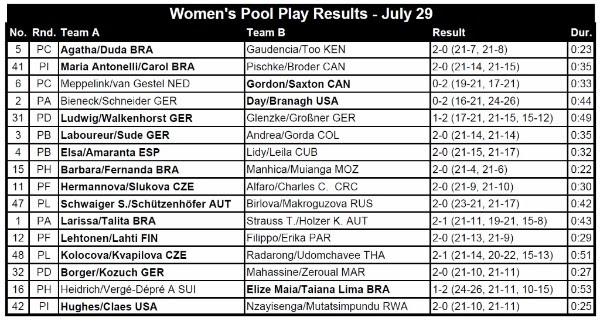