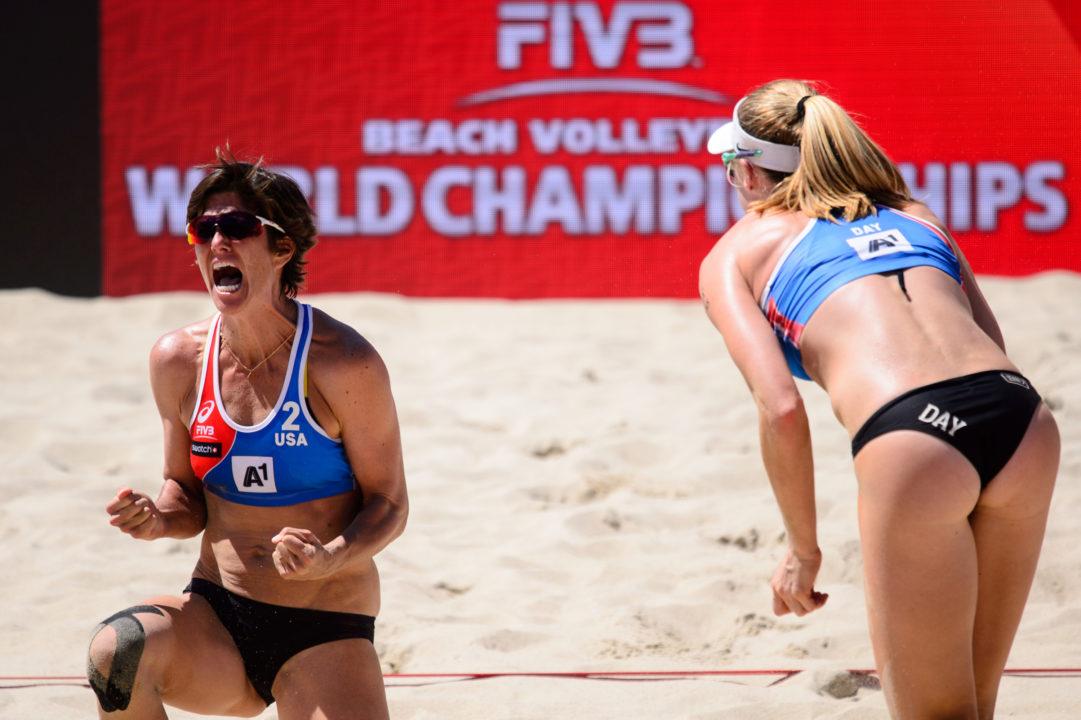 Americans Emily Day and Nicole Branagh swept Germany’s Isabel Schneider and Victoria Bieneck on Saturday in their opening match of the 2017 FIVB World Championships. That result is a victory for Day and Branagh in their first-ever match together after just a few days’ practice. Day was scrambled from an AVP Tour win last week to Vienna when Branagh’s former partner Kerri Walsh Jennings – also a relatively new pairing – dislocated her shoulder in Poland last weekend.

The German pairing had the advantage early – relying consistently on their off-speed hitting to built an early 7-3 lead in the first set.

But then Nicole Branagh, who took last summer off to give birth to her 2nd child, showed what made her one of the world’s dominant players for a period. She ratcheted up her serve early with 3 first-set aces (though also 3 errors) and her rocket right arm got warmed up.

The Germans tried to adjust and started picking on Day midway through that first set, but the Americans were unphased and won the 2nd set 21-16.

In the 2nd set, the Germans, in spite of being by far the younger of the pairs, (they’re both 26, while Day is almost 30 and Branagh is 38), struggled with their conditioning and were clearly running out of steam. The Americans made the taller and less agile Bieneck move, and the effect was more fatigued hitting – including a few crucial late-match off-speed shots into the net. Bieneck had just 1 hitting error in the first set, but 5 hitting errors in the second as fatigue set in.

Unlike at most tournaments, at the World Championships, teams only pllay one match per day – which typically helps reduce fatigue.

Bieneck did remain effective at the net blocking, with 7 total (more than the other three players combined).

Branagh shifted to a hand-set in the second set, which helped the new pairing mesh better as they become more accustomed to playing together.

“We’ll take the win in two sets,” Branagh said after the match when asked if they would’ve preferred a 3-setter to get more experience. With the win, Branagh and Day have almost assured themselves of a spot in the top 2 in the group, which earns them an automatic advancement to the tournament’s knockout stage.