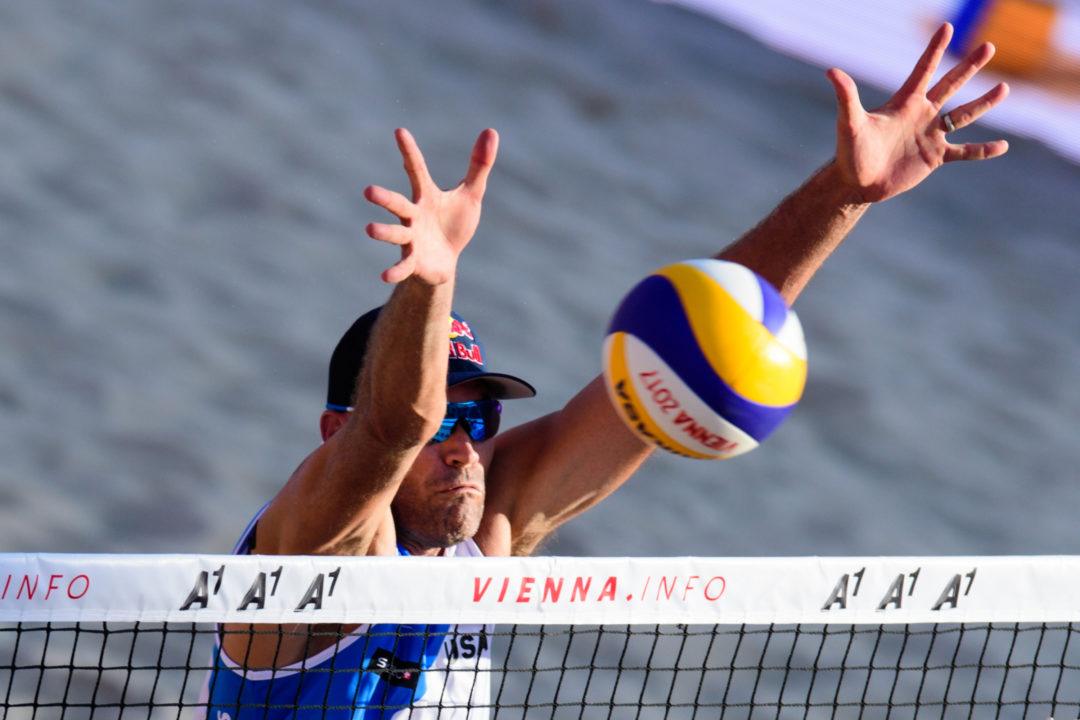 All top-seeded teams playing on day two of the 2017 Beach World Championships won their matches, with Phil Dalhausser/Nick Lucena being the only one needing three sets to win.  Current Photo via FIVB

All top-seeded teams playing on day two of the 2017 Beach World Championships won their matches, with Phil Dalhausser/Nick Lucena being the only one needing three sets to win. Dalhausser/Lucena are the #3 seed in the tournament and was paired up to play fellow American’s, Ryan Doherty/John Hyden in Pool C.

It took until the second set for Dalhausser/Lucena to warm up in the match, as Doherty/Hyden took the first set advantage. Doherty, the oldest player in the tournament at 44 years and 9 months, blocked seven balls in the match, more than any of the players combined. To fight around the tall block, Dalhausser had to adjust his sets to Lucena so he could avoid the length of Doherty.

Dalhausser/Lucena fought back from the first set deficit, adjusting to the play of Doherty/Hyden to take the three-set win to go 1-0 so far in the tournament.

American’s Theo Brunner/Casey Patterson took on Austria’s Robin Seidl/Tobias Winter. Brunner/Patterson were able to walk away with the win despite there being a huge, loud crowd for the home team. Brunner is one of the best blockers in the world but struggled to stop the Austrian attack, though his blocking scheme did frazzle the Austria’s as they committed 17 errors in the match.

The American’s took the first set 21-17, then turned around their blocking performance, with Brunner stuffing three in the second set. Winter served three-straight aces in the second set, to attempt a comeback on the Americans but put the next one in the net. A lack of errors helped the American side win the match, as the Austrian’s dominated on the attack with 27 kills, though had the 17 errors to accompany that stat. Brunner/Patterson only committed four errors in the two sets, which kept them in the match.

The #1 seed on the men’s side of the tournament, Alvaro Filho and Saymon Santos of Brazil were able to roll to a straight set win over Trinidad & Tobago’s Daniel Williams/Marlon Phillip 2-0, (21-11, 21-11). The Brazilian’s out-hit, blocked and served the Trinidadian’s but committed nearly the same amount of errors as their opponents. Though they committed the errors, they were able to use their offense and defense to outshine their competitors.

The reigning 2016 Olympic champions and the 2015 edition of the Beach World Championships in the Netherlands, Bruno Schmidt and Alison Cerutti of Brazil began their journey to a repeat performance with a win. Schmidt/Cerutti defeated Mozambique’s Nguvo/Tovela 2-0, (21-13, 21-13). Schmidt led all players in the match with 21 points scored on 18 kills and three aces while Cerutti added another nine for the team.

“Mozambique was so athletic, and they had no pressure on them. Nobody was expecting anything of them, but there is a reason they are here. This is the first time we saw them and they have been able to watch us. This is the best part of beach volleyball, having to adapt as fast as possible for every situation,” said Schmidt.

Schmidt also said that he doesn’t feel any extra pressure because they have won the event before. He and Cerutti are just looking at the competition day to day, handling what is thrown at them.