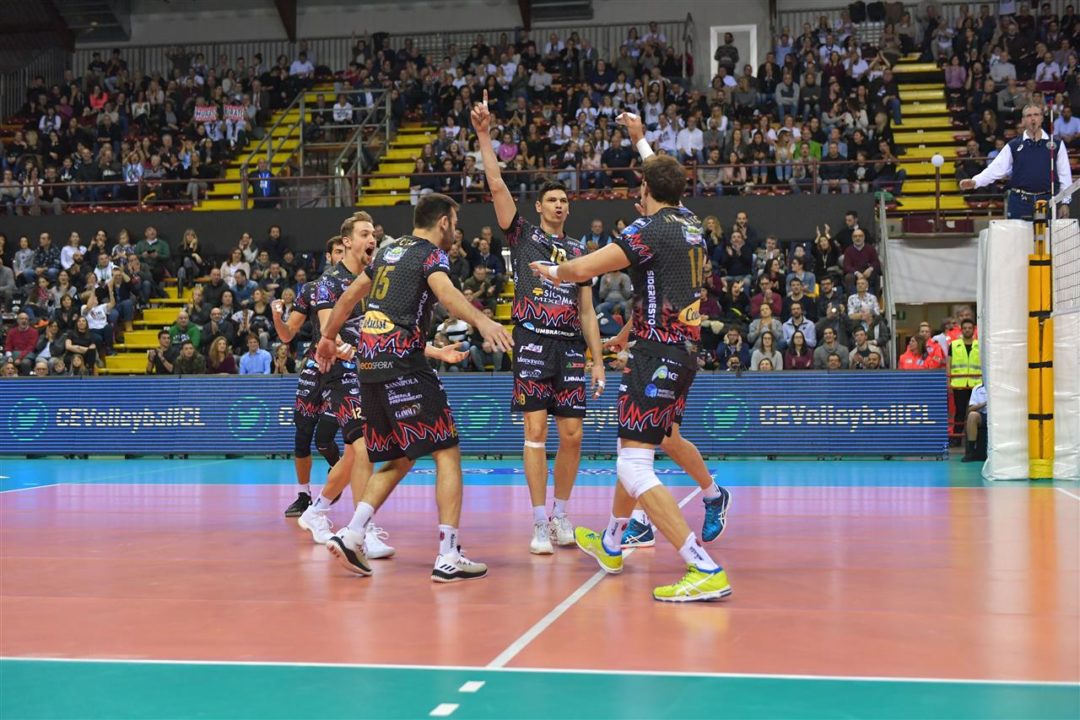 The 4th leg in the 4th round of the Champions League has concluded with 4 teams remaining unbeaten to this point in the competition.  Current Photo via CEV

Sir Safety had no troubles fighting their way past Knack, winning in three sets. American Aaron Russell led the team’s scoring with 18 points while Alexander Berger and Aleksandar Atanasijevic each posted 14 points in the win.

Cucine Lube flew through Fenerbahce in the fourth leg in a three-set sweep. The Italian side was led by Osmany Juantorena with 17 points while Tsvetan Sokolov and Dragan Stankovic recorded 11 and 10 points, respectively.

VfB had three players reach double-digit points in the team’s sweep over Paok in the fourth round to remain undefeated. Athanasios Protopsaltis led the scoring with 14 points while Bartlomiej Boladz and David Sossenheimer recorded 12 and 10 points, respectively.

Halkbank breezed through Levoranta in a sweep to sit at 3-1 in Pool B. Leading the winning side was Nemanja Petric with 18 points while Burutay Subasi posted 12.

PGE fought through a tough four-set match to take down Dinamo to remain in third place in Pool C with a 2-2 record.

After dropping the first set, Lokomotiv battled back to take the next two to remain unbeaten in round 4. The squad was led by Gyorgy Grozer with 29 points in the win while Sergey Savin added in 11.

The German team now sits in second place in Pool D with the four-set win over Spacer’s who has remained win-less in round 4. Robert Kromm led the winning side with 16 points while Graham Vigrass and Paul Carroll posted 14 and 12 points, respectively.

After a close first set, Zenit found some rhythm to take down Jastrzebski in a three-set sweep. Zenit is one of four teams that has remained unbeaten so far in the competition, losing just two sets. Wilfredo Leon led the squad with 14 points while Artem Volvich recorded another 10 points in the win.

Noliko pulled off the upset over Zaksa in the 4th leg with a back and forth five-set battle. Jolan Cox played an instrumental role in the team’s win with 32 points scored including 4 aces while Jelte Maan and Nicolas Bruno put down 13 points each.

After a shaky first set, Trentino made a comeback in the next three sets to win over Arkas in four. Five Trentino players rose to the occasion to post double-digit points – Uros Kovacevic (18), Nicholas Hoag (17), Simone Giannelli (10), Aidan Zingel (10) and Eder Francis Carbonera (10).