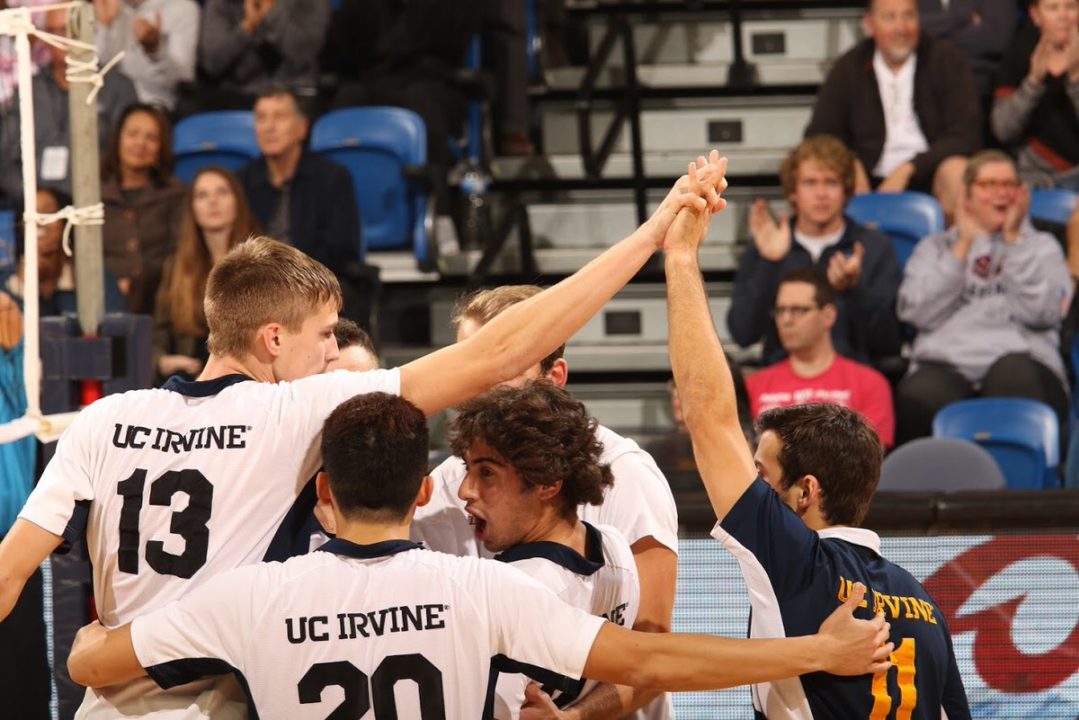 Junior opposite Karl Apfelbach led the way with 17 kills on a .378 hitting percentage, while senior outside Aaron Koubi (16) and sophomore middle Scott Stadick (10) also added double-digit kill totals, each hitting better than .500. Sophomore middle Matthew Younggren (9), freshman outside JB Kam (6) and Schneidmiller (5) rounded out the offense. Younggren and Stadick put up six blocks apiece to pace the team at the net.

GCU led 11-9 in Set 5, before UC Irvine turned things around with a final 6-2 push to complete the comeback victory. Three Lope miscues and a kill and a block by Apfelbach gave the Anteaters a match-point try at 14-12. A Koubi kill two points later gave UCI the win. Seven of the Anteaters’ 15 points in the set came on GCU miscues.

GCU hit at a .542 clip in the opening stanza, but didn’t pull away until the final stretch. UC Irvine scored three of the first four points of the match, including kills by Blazer and Stadick, but GCU charged back and led by as many as four midway through the set. Kills by Turner and Saada and a triple block by Puna Kaniho, King and Saada put the Lopes on top 16-12. Five players turned in kills in the GCU surge. UCI evened the score at 19 with kills by four different players, the last on a Younggren putaway. The teams tied again at 20, before Grand Canyon closed the door with a 5-2 run. King put down two kills as GCU went up 24-20. A service error wrapped the set three points later.

The Anteaters raced out to an 11-5 lead in Set 2 with help from five GCU hitting errors. The Lopes were within four at 12-8 , 14-10 and 15-11, but could not break through. UCI scored six of the next nine points including a kill and a block each by Koubi and Younggren. The duo each added another kill to make it 24-16, before Younggren capped the set with his fifth putaway of the stanza. GCU committed 11 errors in the set, while UCI hit at a .440 clip.

After splitting the first eight points of Set 3, it was nearly all GCU. The Lopes pulled away with a 14-7 run, including four Saada kills and three kills and a block by Williams. Down 18-11, UCI managed four of the next six points, including a stuff by Stadick and Kam. GCU, however, answered with a final 5-2 run. Williams tallied a kill and an ace in the stretch, while Saada tacked on two kills. A hitting error gave the Lopes the 25-17 win.

UCI hit at a .625 clip, with just two hitting errors, in a 25-19 Set 4 win to extend the match. After a tied at 6-all, two GCU miscues, two Apfelbach kills and a Stadick ace pushed the Anteaters out to am 11-7 lead. Apfelbach and Stadick turned in a kill and a block each to push the margin to five at 15-10. The Lopes were within two at 18-16, but UCI countered with a 5-1 run, including three Schneidmiller putaways. A Koubi kill made it 24-18 and a Stadick putdown clinched the set.